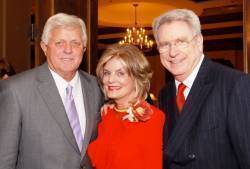 JACKSON, Miss., – For more than 20 years, Suzan Brown Thames (BA 68) of Jackson has worked tirelessly to improve health care for Mississippi children. Now her name will be synonymous with her life’s passion through an endowment to The University of Mississippi Medical Center.

The Suzan Brown Thames Chair in Pediatrics in the Blair E. Batson Hospital was announced, as a surprise to Thames, at the Nov. 20 National Philanthropy Day luncheon sponsored by Mississippi chapter of the Association of Fundraising Professionals. Thames also accepted the award for 2008 Volunteer Fundraiser of the Year at the event.

“I have never been so shocked, so overwhelmed and so proud,” she said. “This is a tribute not just to me but to the pediatrics department that has grown so much over the years. We need more and more chairs.”

The consummate fundraiser and volunteer, Thames said her motivation is the well being of Mississippi’s children. She stated in her acceptance speech that she was among many people who did what was necessary to accomplish the impossible. She shared the credit with family, friends, fellow volunteers and the physicians and leadership of the Medical Center.

“Because of them, I was consumed by the thought that the health and welfare of a child, any child, was important to our society. As much as anything, it’s been a journey of blind faith,” she said. “Throughout my journey, I have had the privilege of standing on the shoulders of many giants.”

At the Medical Center, a chair is fully endowed when gifts reach $2 million. Dr. Dan Jones, vice chancellor for health affairs, said $1.5 million has been raised for Thames’ chair through private donations. “The resources are going to be great to move the department forward and to further the treatment of our children,” he said.

A graduate of the Department of Communication Sciences and Disorders in the School of Applied Sciences, Thames became interested in the Medical Center with her involvement in REACH (Recreation, Enrichment and Activities for Children’s Health), a Junior League project that works with young cancer patients. Thames and other members of the Junior League raised $2 million to build the Mississippi Children’s Cancer Clinic, which opened in 1991 and now serves thousands of children throughout the state.

Thames also was involved in raising money to help build the Blair E. Batson Hospital for Children, which opened in 1997. Under her leadership as president and chair of the board of Friends of Children’s Hospital, the organization raised a record $1 million for the children’s hospital in 2007.

Thames also currently serves on The University of Mississippi Foundation’s board of directors, the advisory board of the Department of Communication Sciences and Disorders, and she is president-elect of the School of Applied Sciences Alumni Chapter Board. In addition to giving to the Medical Center, she has made donations to the Chancellor’s Trust, the School of Applied Sciences, the Inn at Ole Miss and the Gertrude C. Ford Center for the Performing Arts.

“She epitomizes what a foundation board member is all about,” said Sandra Guest, vice president of the UM Foundation. “She is supportive of the university at both the Oxford and the Jackson campuses. She has been an ambassador for Ole Miss for many years.”

In all, it’s estimated that at least $20 million worth of charitable contributions can be attributed to Thames. UM Chancellor Robert Khayat said Thames’ name is equated with family, philanthropy and children.
“The word ‘volunteer’ means Suzan Brown Thames,” he said.

For more information on making a gift to the  Suzan Brown Thames Chair in Pediatrics at University of Mississippi Medical Center, visit