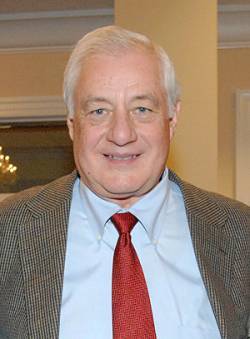 OXFORD, Miss. – Brothers Hardy P. Graham and Newell Graham have pledged $250,000 to the University of Mississippi School of Law in honor of their father, Hardy M. Graham. All three Graham men are Ole Miss alumni.

The gift will be used to create the Hardy M. Graham Library Special Collections Room in the new law school facility, which is currently under construction on the Oxford campus.

“My father was a major giver to Ole Miss over the years,” Hardy P. Graham said. “Newell and his wife, Bettie, and I decided that it would be a nice way to honor him. We felt since he was a lawyer and loved Ole Miss that it would be very appropriate to expand on his original gift and have the room named for him.”

The elder Graham, a Meridian native who was 94 when died last year, received both his bachelor’s and law degrees from Ole Miss in 1934.

“We are grateful for this generous gift from Hardy Graham and Newell Graham and their families to support the new School of Law building,” said Sam Davis, dean of the school. “The Grahams are some of our most outstanding graduates who have continued their interest in Ole Miss over the years. The Hardy M. Graham Library Special Collections Room is a fitting tribute and will serve our law students well for many generations to come.”

Upon graduation, Hardy M. Graham practiced law before the U.S. Court of Appeals, U.S. District Court of Mississippi and the U.S. Supreme Court. After working in Washington, D.C., as an attorney for the Federal Trade Commission and serving in the Navy, Graham moved to Union City, Tenn., to become operating partner of the Union City Coca-Cola Bottling Co. He was a partner in the company until his death.

Following in his father’s footsteps, Hardy P. Graham is also a longtime supporter of the university. He serves on the University Foundation Board of Directors, is a member of the Chancellor’s Trust and has made other significant donations to Ole Miss, including a gift of $100,000, also in honor of his father, toward the construction of the university’s Indoor Practice Facility, which is used by the Ole Miss football team and other intercollegiate sports.

“Ole Miss has always meant a lot to our family,” he said. “We all attribute our successes to the experiences we had at Ole Miss, the people we met and the education we received there. It just had a very positive impact on my life, my father’s life and my brother’s life.”

A 1964 Ole Miss graduate, Hardy P. Graham also earned his master’s degree from UM in 1965 while working as a graduate assistant teaching history. After graduation he served as an officer in the Navy. He then went on to earn his juris doctorate from Georgetown University Law Center in Washington, D.C. As an Ole Miss student, Graham was a member of the UM basketball team and was awarded a Taylor Medal. He is the president of Meridian Coca-Cola Bottling Co.

Newell Graham, who graduated from Ole Miss in 1969, also served as a Navy officer and is the CEO of Union City Coca-Cola Bottling Co.

The gift is part of the university’s MomentUM campaign, a four-year initiative to raise $200 million. Funds raised through the campaign, which ends in December 2008, will support scholarships, graduate fellowships, faculty support, a basketball practice facility, residential colleges and the new law school. Also in the plans are a cancer center at the UM Medical Center and a new building to house the School of Pharmacy, both in Jackson.

For more information on making a gift to the University of Mississippi, please visit http://www.umf.olemiss.edu/makeagift.