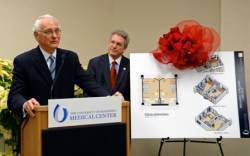 JACKSON — Health care provided to the state’s most critically ill and injured children will be greatly enhanced through a $2.5 million pledge from The Joseph C. Bancroft Charitable and Educational Fund to the Blair E. Batson Hospital for Children. The money will fund the renovation of the only pediatric intensive care unit in the state, housed in the Batson Hospital.

“This extraordinary gift from the Bancroft Fund will transform our ability to provide state-of-the-art intensive care for Mississippi’s children by almost doubling our capacity,” said Dr. Daniel Jones, vice chancellor for health affairs at the University of Mississippi Medical Center. “It will allow us to care for children from all over our state in the most technologically advanced and family-centered facilities.”

Originally built in 1997, Batson Hospital’s PICU currently has 16 intensive care beds and 14 transitional beds designated for less critically ill patients not well enough to transfer to one of the general pediatric floors. In the last year, the unit averaged approximately 150 admissions per month and occasionally experienced bed shortages.

Renovation plans for the unit include moving the transitional care beds to another floor in the hospital, dedicating 28 beds exclusively to intensive care. Additionally, two centrally-located nurses’ stations will be replaced with several smaller stations located between two rooms, allowing nurses to observe patients at all times.

Design plans also enhance the hospital’s family-centered care environment by increasing the number of rooms in which parents can stay overnight with their children. Further environmental changes involve creating a larger waiting room and designating private areas for family consultations. Construction should begin in 2009.

"Batson Hospital is a critical resource for the health care of children in our state,” said Gerald M. Abdalla, director of the Bancroft Fund. “We consider this to be a project to benefit the children of Mississippi."

The gift completes the Medical Center’s $50 million portion of the MomentUM Capital Campaign, a three-year $200 million fundraising campaign for the University of Mississippi that began in January 2005. Funds raised during the campaign support education, research and patient-care missions.

The Joseph C. Bancroft Charitable and Educational Fund is a non-profit organization based in McComb that supports charitable and educational programs by offering financial support, leadership and guidance to qualifying organizations within the state of Mississippi. The fund was established by Joseph C. Bancroft’s estate. Bancroft was the founder and owner of Croft, LLS, a manufacturer of aluminum and vinyl windows and doors.

The Blair E. Batson Hospital for Children, part of University of Mississippi Health Care, is located on the campus of the University of Mississippi Medical Center. It is the only hospital in the state devoted exclusively to the care and treatment of sick and injured youngsters.  More than 150,000 children from all of the state’s 82 counties come to Batson Hospital each year.  The spectrum of care ranges from well-child care for healthy newborns to care for cancer, birth defects, epilepsy, cystic fibrosis, sickle cell anemia, neurological disorders, pulmonary disease, trauma, allergies, diabetes and numerous other childhood illnesses.