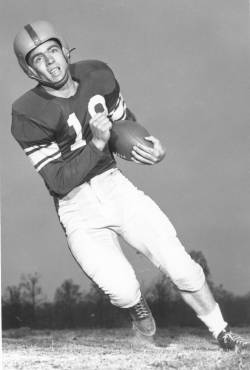 OXFORD, Miss. – Diana Day-Cartee said that creating the JoAnne and Eagle Day Ole Miss First Scholarship at the University of Mississippi is allowing her late father’s "mission on earth to live on" while also fulfilling one of her mother’s longtime desires.

Named for Day-Cartee’s parents and seeded with a $25,000 gift to UM, the scholarship will provide assistance for deserving undergraduate students to attend Ole Miss.

"Since his retirement from pro football, my father’s passion was working with inner-city kids to help them overcome their problems," Day-Cartee said. "He stressed the importance of education to them day-in and day-out, and my mother has always wanted to help someone attend Ole Miss. Both of my parents have always loved young people. They have encouraged many with their life lessons urging others to be the best they can be. Mom and Dad are great examples that hard work and dedication do pay off in the end."
Day-Cartee was prompted to create the scholarship after her father’s death in February. Eagle Day, who excelled on the football and baseball fields at UM, was inducted into the Mississippi Sports Hall of Fame in 1981, after a career punting for the NFL’s Washington Redskins and quarterbacking in the Canadian Football League.

"Eagle and I both loved Ole Miss so much," said JoAnne Day, who lives in Jackson. "He’d be thrilled to know about this, and I was floored when I found out. This is absolutely wonderful."

Day-Cartee said that funding a scholarship for a deserving Ole Miss student was only fitting, given her family history.

Day-Cartee earned her bachelor’s degree from UM in 1980. She lives in Nashville with her husband, Alan Cartee, and their daughter, Ali. Besides serving as CEO of DDC Investments, she is involved in several community service organizations in Nashville, including the city’s Junior League, for which she is vice president of development.

Day-Cartee learned of Ole Miss First through the initiative’s newsletter, she said. She subsequently asked UM Chancellor Robert Khayat to surprise her mother with the news of the JoAnne and Eagle Day Ole Miss First Scholarship as a Mother’s Day gift.

The Ole Miss First program was created by Khayat to help ensure that every deserving student who wishes to do so may attend UM. Besides tuition, the program provides a unique mentoring component that provides a mentor for each scholar during his or her four years at UM. Joanne Day plans to mentor the recipient of the scholarship in her and her husband’s name.

"We are profoundly grateful for this gift from Diana Day-Cartee and for the gift of time that JoAnne Day will provide," Khayat said. "Eagle was a legendary member of the Ole Miss family and JoAnne and Diana continue to be wonderful ambassadors for Ole Miss. We are pleased that Diana has honored them in such a meaningful way."

Day-Cartee’s gift is part of the university’s MomentUM campaign, a four-year initiative to raise $200 million. Funds raised through the campaign, which ends in December 2008, will support scholarships, graduate fellowships, faculty support, a basketball practice facility, residential colleges and a new law school on the Oxford campus. Also in the plans are a cancer center at the UM Medical Center and a new building to house the School of Pharmacy, both in Jackson.