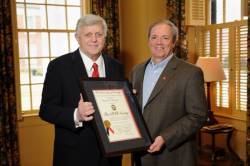 Chancellor Robert Khayat presents Wendell Weakley with a certificate for the 1848 Society, marking the creation of the Sloan, Allison and Elizabeth Weakley Women’s Council Scholarship Endowment.

OXFORD, Miss. – University of Mississippi Foundation president Wendell Weakley and his wife, Sue, have honored their three daughters with a bequest that will create an Ole Miss Women’s Council scholarship endowment.

"You cannot imagine how much this means to the members of the council," said Jan Farrington, chair of the Ole Miss Women’s Council. "Wendell has been most supportive of our program since becoming president of the foundation. This bequest to set up a Women’s Council scholarship to honor his three daughters is a confirmation that our mission is important and that our work is appreciated. We are deeply grateful to Wendell and Sue not only for the gift, but also for setting the example for others."

Weakley said one reason he was inspired to make the gift is because of his role on the new Deferred and Planned Giving Society Committee. This committee promotes the 1848 Society, which recognizes alumni and friends of the university who have either funded or planned a deferred gift, such as a bequest or a life income plan.

"Planned giving has such a tremendous impact on our university and its endowment," Weakley said. "Our mission is to inform as many of our alumni and friends as possible. We want to educate them on the endless possibilities of crafting a tax-wise gift to the university and encourage them to step forward during the Momentum campaign."

The Sloan, Allison and Elizabeth Weakley Women’s Council Scholarship Endowment is also a gift that holds special meaning to the entire Weakley family, he said. Both Weakley and his wife are UM alumni and have deep love for the university.

"Ole Miss is where my heart is, and Sue and I have our roots here," he said. "There is something positively different about the Ole Miss-Oxford experience. I know my daughters, two of whom are also UM graduates, feel the same way."

Allison Weakley Sutherland, who works as an auditor at KPMG in Memphis, Tenn., earned both her bachelor’s and master’s degrees in accountancy from UM, in 2002 and 2003. Her husband, Ashley Sutherland, earned a bachelor’s degree in business from UM in 2002.

"Growing up in a female-dominated household and having a daughter of my own, it is important to me to support other women and personify the support women can provide to this great university," Allison said. "My parents set such a wonderful example of how important education is. It was always understood that we would not only go to college but that we would all obtain master’s degrees. I am so thankful that my parents set up this scholarship in our honor so that other students can pursue an education and become leaders."

Sloan Weakley Galloway, who works as learning specialist with Audio Visual Innovations in Atlanta, also earned two degrees from UM, in 2000 and 2001. She holds a bachelor’s degree in elementary education and a master’s degree in curriculum and instruction.

"I am extremely honored. I can’t think of a higher tribute to our family than to have a scholarship in our names at Ole Miss," Sloan said. "I am so proud of my dad for doing this. Ole Miss is probably my favorite place to visit, not only because of the memories and friendships I made while I attended there but also because I think of Ole Miss as part of my family. The scholarships will allow future generations of students to experience the Ole Miss family and the guidance and mentoring I experienced in growing up in that environment."

Elizabeth Knox Weakley is a student at the University of Colorado but still feels a strong connection to Ole Miss because of her family’s history with the school. She said she has been coming to Ole Miss games with her older sisters since she was born. She also attends Ole Miss each summer when she returns home from Boulder.

Weakley said he and his wife chose to support the Ole Miss Women’s Council because they believe in its mission to identify and nurture outstanding young men and women of today, in hopes of creating future leaders of a more caring and ethical society.

"I have a very strong belief in the Women’s Council because of the leadership/mentorship program aspects," Weakley said. "This program goes well beyond financial needs; it meets the needs of maturing students who will lead us tomorrow. It’s our duty to provide a little guidance along the way to ensure the future success of our alumni."

Weakley’s gift is part of the university’s MomentUM campaign, a four-year initiative to raise $200 million. The campaign, which ends in December 2008, already has raised more than $180 million for scholarships, graduate fellowships, faculty support, a basketball practice facility, residential colleges and a new law school on the Oxford campus. Also in the plans is a cancer center at the UM Medical Center in Jackson.

For more information on planning a gift to the University of Mississippi, go to
http://www.umf.olemiss.edu/planning/plannedgifts.php