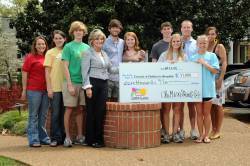 Greek Council members present a check to Suzan Thames, chair of the board of the Friends of the Children’s Hospital.

The Greek Council includes presidents of the 32 Greek organizations on the Oxford campus and leaders of the Interfraternity, Panhellenic and National Panhellenic councils. Its members decide the amount and beneficiaries of the gifts.

In addition, the UM chapter of Delta Delta Delta sorority has given $5,000 to the Children’s Cancer Clinic at the Blair E. Batson Children’s Hospital.

"We are absolutely so excited about this," said Suzan Thames, chair of the board of Friends of the Children’s Hospital. "So few people realize that the Blair E. Batson Children’s Hospital is the only children’s hospital in the state of Mississippi, treating such diseases as cancer, epilepsy, cystic fibrosis, sickle cell anemia and numerous other childhood illnesses. These are wonderful and generous gifts from the Greek students at the University of Mississippi. I can’t tell you how much we appreciate everything they have done for the children of our state."

The funds given by the Tri Deltas were raised at the Delta Delta Delta Pancakes for Kids event last fall. The event yielded more than $16,000, which was divided between state and national nonprofits.

"We wanted to do something to benefit our state," said Elizabeth McRight, president of the sorority and a Greenville native. "This is the first time our sorority has given to the Blair E. Batson Children’s Hospital, but I know it won’t be the last. This is something our girls are really proud of."

Thomas "Sparky" Reardon, dean of students, commended the students for their generosity and desire to positively represent the entire UM Greek community.

"These students are scholars and leaders who believe in giving to others," Reardon said. "Ole Miss Greeks provide support and services for agencies, organizations and individuals. These gifts to benefit the Blair E. Batson Hospital for Children are especially meaningful since the funds will be used to help the children of Mississippi. This is an outstanding achievement and we, as a university, appreciate and applaud their efforts and generosity."

For more information about the Greek Council, go to