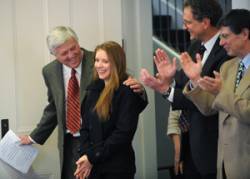 OXFORD, Miss. – When the chancellor’s office at the University of Mississippi called Alecia Waite to schedule a meeting about environmental issues, the student leader and activist immediately prepared herself to show how Ole Miss could improve its recycling efforts.

But Chancellor Robert Khayat had a different agenda – namely, a surprise reception to congratulate Waite on winning a 2008 Morris K. Udall Scholarship.

"It’s funny, because I was cramming for the meeting, studying up on recycling, so I’d be ready," said Waite of Oxford, a senior in the Sally McDonnell Barksdale Honors College. "I first heard about the Udall in my freshman year. It was a lot of work, but it was really worth it."

Waite is to receive up to $5,000 for one year. She is among 69 scholars who intend to pursue careers related to the environment, a topic that Udall was passionate about during his 30 years in the U.S. House of Representatives. A total of 80 scholars were chosen from more than 500 applicants nominated by 239 colleges and universities.

"Being selected as a Udall Scholar clearly recognizes Alecia as one of the outstanding university students in America," Khayat said. "It was a highly competitive process. It is a credit to both Alecia and to this university for her to be named a Udall Scholar, and we congratulate her."

Waite aspires to teach international studies at the collegiate level, with a focus on U.S. and Chinese environmental policy. Though she’d been active with the UM environmental group Roots and Shoots, it was a monthlong internship in Beijing that gave her a new perspective on how climate change affects urban areas. During her daily two-hour commute, Waite said she inhaled lots of dust and "enough exhaust to give me a headache every morning."

"It is easy to envision environmental concerns in terms of melting icebergs, deforestation and other tangible images, but cities are full of environmental concerns that can be just as tragic," Waite wrote in her Udall application. "The number one cause of hospitalizations in Beijing is air pollution-related diseases. The experience of living in a city with such vast environmental challenges as Beijing inspired me to adopt an urban focus in my research."

That passion, along with her tireless work ethic, has earned Waite many fans among her professors.

"Alecia is a very smart, very hard worker," said Kees Gispen, director of the Croft Institute for International Studies. "She is modest and humble, but still draws people in with her personality. She will go into the environmental arena as a lifelong pursuit, with a savvy that will serve her well."

"Alecia has been super-attentive to the issues affecting development and justice toward the environment," said SMBHC Dean Douglass Sullivan-Gonzáles. "When I think about Alecia, she has a remarkable grasp of how global environmental issues break down into practical day-to-day concerns."

The Morris K. Udall Scholarship and Excellence in National Environmental Policy Foundation was authorized by Congress in 1992 to honor Udall’s legacy of public service. The foundation is supported by a trust fund in the U.S. Treasury and contributions from the private sector. Since the first awards in 1996, 994 Udall Scholars have been selected.

"Alecia is deeply committed to the environment; it goes bone-deep with her, said SMBHC Assistant Dean Debra Young, who coached Waite on her Udall application. "Knowing her, she’ll be disappointed this meeting she expected with the chancellor isn’t what she thought it would be."

Turns out Young was wrong – sort of.

"I’m not disappointed; this is really awesome," Waite said. "But you can tell Chancellor Khayat that I’d still like to meet with him on environmental issues."