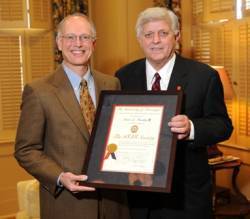 Houston said he wanted to give to Ole Miss because he has such a love for the university.

"Ole Miss is so much more than an institution to me," he said. "It’s like a second family. I felt that by creating this endowment the Houston family would be leaving a legacy for future generations of the Ole Miss family. I had a wonderful experience here and my family is supportive of this campaign."

The endowment will support both the Patterson School of Accountancy and the School of Law.

"I think it’s important to give and continue to be a part of the Ole Miss family no matter where we are," Houston said. "Providing scholarships to enrich the lives of students helps Ole Miss attract and retain the best and the brightest students in Mississippi. As individuals and as a society, we receive immeasurable benefits from producing educated graduates who also feel a strong connection to Ole Miss."

A longtime UM Foundation Board member and former chairman of the board, Houston continues his service to the university through his leadership as chairman of the Deferred and Planned Giving Society Committee, a group working to increase the number of planned and deferred gifts to UM. The committee’s mission is to inform, educate and encourage alumni and friends to provide private support through planned gifts to the university.

"Planned giving is extremely important to Ole Miss," he said. "I think it’s important to give to the future of the university. A planned or deferred gift is truly the gift of a lifetime and creates a permanent legacy."

Houston provided tremendous leadership to the UM Foundation as chairman and graciously agreed to help with Deferred and Planned Giving Society, said Sandra Guest, vice president of the foundation. The committee set an ambitious goal to increase membership to 1,000 during the MomentUM campaign. Membership has increased to 750 members and they are well on their way to reaching their initial goal.

"We are so thankful to Jamie for his exemplary gift and to the rest of our committee members for supporting Ole Miss through planned gifts," Guest said. "I don’t think anyone realizes the impact of these significant gifts. Since the beginning of the UM Foundation, over $30 million has been received from planned gifts and there is over $47 million in future gifts pledged that we are aware of. The Jamie Houston Family Endowment adds to that and we are profoundly grateful."

Houston received his bachelor’s degree in 1974 and law degree in ’76, both from Ole Miss. He completed the master of laws degree at New York University in 1978. He is a member of the Jackson law firm of Watkins & Eager PLLC. He has practiced there since 1979 and has been a member of the firm since 1983. While at Ole Miss, he was a member of the Sigma Chi fraternity and the honorary fraternities of Beta Alpha Psi, Omicron Delta Kappa and Phi Delta Phi. Houston has served as member of the UM Foundation Board of Directors since 1997.

Houston’s gift is part of the university’s MomentUM campaign, a four-year initiative to raise $200 million. The campaign, which ends in December 2008, already has raised more than $180 million for scholarships, graduate fellowships, faculty support, a basketball practice facility, residential colleges and a new law school on the Oxford campus. Also in the plans is a cancer center at the UM Medical Center in Jackson.