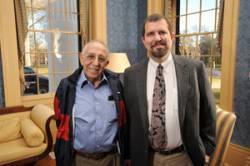 Chairman of the board of directors of Adaptec Corp., Adler visited the campus recently and announced his latest gift: $150,000 to the university’s Center for Mathematics and Science Education. He previously donated company stock worth some $3 million to the School of Engineering to establish the engineering scholarship endowment fund that bears his name and for other support.

"The university has had a very big impact upon me; wherever the money is to be invested, I’m sure there will be measurable results," said Adler, a member of the Woods Order, a UM engineering alumni fund-raising and leadership group.

CMSE was funded through a $1.2 million gift from the Robert M. Hearin Support Foundation in 2006. Housed in the UM School of Engineering, the center aims to improve math and science education across the state by fostering interaction between UM departments and K-12 public schools.

Faculty in the center mentor students in their technical field by providing education and leadership training on a weekly basis. Qualified high school students with interest in and aptitude for mathematics, the physical sciences or engineering are encouraged to pursue degrees in these fields and simultaneously work toward teacher certification.

"One of our goals is to educate K-12 students about what engineers, mathematicians and scientists do," said John O’Haver, associate professor of chemical engineering and CMSE director. "We need to explain to them the incredible need in our country for students to pursue these fields, and the opportunities and career paths that will be there for them."

"Our ambassadors travel to schools throughout the state, talking with students and teachers about the various majors and careers in these areas," O’Haver said.

Students who participate in the center’s programs, because of their backgrounds, will be able to help produce new generations of students who are more competent in mathematics and science and who are encouraged to pursue these fields at the university level, O’Haver said.

Penniless and fleeing from Communist tyranny, Adler came from Hungary to the university in 1956. After earning his bachelor’s degree in electrical engineering in 1960, he began working for IBM. In 1979, he became manager of the company’s high-end disk drive controller laboratory.

From 1981 to 1985, Adler held various senior level positions at Amdahl Corp., a key competitor of IBM founded by former IBM employees. He joined Adaptec as president in 1985 and was appointed CEO in 1986. In 1990, he was appointed chairman of the company’s board of directors.

For more information on UM’s Center for Mathematics and Science Education, contact John O’Haver at 662-916-5347 or johaver@olemiss.edu.

The gift is part of the university’s MomentUM campaign, a four-year initiative to raise $200 million. The campaign, which ends in December, already has raised more than $180 million for scholarships, graduate fellowships, faculty support, a basketball practice facility, residential colleges and a new law school on the Oxford campus. Also in the plan is a cancer center at the Medical Center.