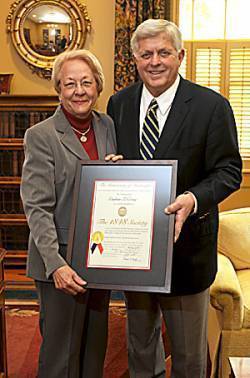 Chancellor Robert Khayat presents Daphne Craig with a certificate honoring her as a member of the UM Foundation's 1848 Society.

OXFORD, Miss. – University of Mississippi alumna Daphine Denley Craig has honored the memory of her parents with a scholarship in their names. Craig, a 1960 Ole Miss graduate, seeded the Bernice Raggett and John Barksdale Denley Jr. Scholarship with a gift of $25,000.
Besides her initial gift, Craig has bequeathed a portion of her estate to further fund the scholarship.

"My parents’ dream was that their children attend Ole Miss," said Craig, an Olive Branch native. "They would both be pleased to have their names on a scholarship to make their dream possible for other parents."

Scholarship recipients are to be full-time students with first preference given to those from Tallahatchie, Grenada, Bolivar, Yalobusha or Sunflower counties.

"We are so thankful to Daphine Craig for choosing to honor her parents in this way," said Sandra Guest, vice president of the UM Foundation. "Mrs. Craig is one of the kindest people I’ve ever met and her love of family and Ole Miss are truly exemplified in this special gift. It is only fitting that her parents name live on in perpetuity through the students that will receive this scholarship."

Craig’s mother, Bernice Raggett, a New Albany native, was a homemaker and caregiver to her four children, eight grandchildren and five great-grandchildren.

Her father, John Barksdale Denley Jr., a Paynes native, worked in his early years as a farmer and later joined the U.S. Navy, serving in the Pacific theater in World War II. From 1968 until his death, he was the manager of the Paynes Water Association, a community water system.

They couple, who made their home in Paynes, married in 1937 and celebrated their 62nd wedding anniversary in 1999.

Craig said it was her parents’ love of Ole Miss athletics that began their lifelong love affair with the university. A highlight for them was seeing the Rebels win the 1956 Cotton Bowl in Dallas.

Of the couple’s four children, all have ties to Ole Miss. Besides Craig, who majored in biology, Harriette Denley Faust earned her accountancy degree from UM in 1968. The couple’s other two children, Joan Denley Sayle and John B. Denley III, attended UM in the 1960s.

"This is the greatest nation in the world, truly a land of opportunity and a land where dreams can come true," Craig said. "Education is essential to create opportunities and fulfill dreams. It is a privilege for me to play a small part in the education of Mississippians as they contribute to the greatness of our state and nation."

Craig’s gift is part of the university’s MomentUM campaign, a four-year initiative to raise $200 million. The campaign, which ends in December 2008, already has raised more than $180 million for scholarships, graduate fellowships, faculty support, a basketball practice facility, residential colleges and a new law school on the Oxford campus. Also in the plans is a cancer center at the UM Medical Center in Jackson.

For more information on planning a gift to Ole Miss, go to http://www.umf.olemiss.edu/planning/plannedgifts.php.