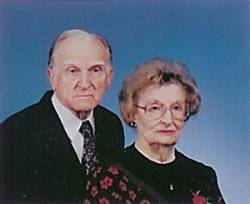 OXFORD, Miss. – For 93 years, University of Mississippi alumnus Harper Johnson has watched the world change. He remembers the tracks and locomotives that carried him to Oxford in 1935 to enroll at the university, and he recalls the building of highways back then that Ole Miss students still travel. He saw radio born, then television, and laughs now at the memory of a professor who told him both were fads. Behind every change he’s seen, Johnson has seen something else: engineers.

It’s the career he chose, becoming a successful electrical engineer and making his home in Greenwood. Now, he hopes to help other young men and women enjoy similar opportunities, as he and his late wife, Elsie, have given $321,000 to Ole Miss to create the Elsie and Harper Johnson Jr. Scholarship Endowment in the School of Engineering.

In other giving, Johnson is a member of UM’s 1848 Society, which recognizes alumni and friends of the university who have either funded or planned a deferred gift, such as a bequest or a life income plan.

"Mississippi in general is starving for engineers," Johnson said. "Without engineers we’re not going to grow. I want to see Ole Miss grow in the way of engineering. I want to encourage students from Mississippi to stay in the state. To keep students in Mississippi, you’ve got to have something for them. I want to help keep them in engineering and give them somewhere to go."

The scholarship will be awarded to full-time electrical engineering students from Leflore or Tate counties.

"What Elsie and Harper have done is exactly what the state of Mississippi, and small towns especially, need," said Floyd Melton Jr., an attorney in Greenwood and a friend of Johnson. "The goal of this scholarship is to see kids take the hard courses, become engineers and come back into our communities to work and live."

The son of a lawyer, grandson of a judge and grandson of a doctor, Johnson said he never had any plans to enter the family professions. "Mississippi has enough lawyers and doctors," he joked.

Early in his life, it was the shop next door to his father’s law office in Senatobia that intrigued Johnson most. The store specialized in leatherwork and he spent many hours there, marveling at how stuff was made, observing how things worked. When he boarded a train bound for Ole Miss, he knew engineering was his calling. Johnson was a quick learner, excelling even in the tough subjects. "Studying engineering was fun for me," he said. He had come to Ole Miss to study electrical engineering, but just a year into his schooling, the university dropped its electrical engineering courses. He left Oxford and took a job in Greenwood with Supreme Instruments, a company that produced instruments for servicing radios. Johnson worked at Supreme for one year before heading to Fort Wayne, Ind., to finish his degree at Indiana Institute of Technology, then one of the top engineering schools in the country.

With his diploma in hand, Johnson returned to his job in Greenwood with Supreme Instruments, eventually working his way up as head of the service division. After a stint in the Army Signal Corps during WWII, Johnson went back to Greenwood and to Supreme, where he met Elsie, and they married in 1946. When Supreme was bought by Hickok in 1956, Johnson took a job with Greenwood Utility, working there until his retirement in 1980. Johnson also helped bring MathCounts, a national math enrichment program founded by the National Society of Professional Engineers, to Greenwood’s middle schools during his career.

"We are grateful for this generous gift, and we are also appreciative of Harper Johnson’s commitment to the School of Engineering and to engineering as a profession," said Tom Black, development assistant to the engineering dean. "This scholarship will allow more students to study engineering and follow in the footsteps of a man who helped the state of Mississippi grow."

The gift is part of the university’s MomentUM campaign, a four-year initiative to raise $200 million. The campaign, which ends in December 2008, already has raised more than $180 million for scholarships, graduate fellowships, faculty support, a basketball practice facility, residential colleges and a new law school on the Oxford campus. Also in the plans is a cancer center at the UM Medical Center in Jackson.

For more information on how to support programs in the School of Engineering, go to
http://www.olemiss.edu/depts/engineering_school/campaign/.