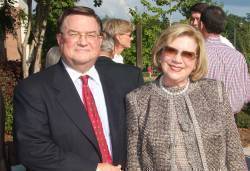 OXFORD, Miss. – A woman recognized in the nation’s capital for her tireless leadership supporting political, educational and charitable fundraising is being honored with a University of Mississippi scholarship endowment and is joining the efforts of the Ole Miss Women’s Council for Philanthropy.

The first Women’s Council Scholarship designated solely for students majoring in public policy leadership in the university’s Trent Lott Leadership Institute is created to honor Martha Dale Fritts of Washington, D.C. Her husband, Eddie Fritts – former president and chief executive officer of the National Association of Broadcasters – and the couple’s three children are establishing the endowment with a $105,000 gift.

Martha Dale Fritts also is accepting a seat on the Ole Miss Women’s Council, which has attracted more than $9 million in private gifts for scholarships since its inception in 2000 and provides valuable mentorship and leadership training for recipients.

"Martha Dale is really a teacher at heart, as she has been mentoring all her adult life," Eddie Fritts said. "She has been the centerpiece of our family and deserves special recognition. I am so grateful she is willing to share additional time mentoring young people."

"This scholarship is a wonderful example not only of this family’s generosity and support of Ole Miss but also of its desire to honor a very special woman," Farrington said. "In addition to being honored by her family, the OMWC is happy to welcome Martha Dale as our newest member. Her experience in philanthropic endeavors will be invaluable to the council, and we look forward to her active participation in our program."

Martha Dale Fritts served 12 years on the board of the Wolf Trap Foundation, which oversees the nation’s only national park for the performing arts, and she has been involved in the Meridian House Foundation, which assists newly posted diplomatic families in Washington. She helped host UM galas in Washington that honored the now late U.S. Rep. Jamie Whitten, as well as U.S. senators Thad Cochran and Trent Lott, and attracted funds for UM initiatives. She is a board member for both the University Foundation and the Gertrude C. Ford Center for the Performing Arts.

While her husband was in the top leadership post of the NAB, she hosted spouses of board members, who represented every geographical region of the country, and engaged them in educational and cultural opportunities of the Washington area. Additionally, Fritts has given of her time to the Cancer Research Foundation and the Arlington Hospital Foundation.

"The endowment of a scholarship in my name is a high honor, as I am aware of the financial pressure on young students these days," Fritts said. "I look forward to mentoring recipients on our numerous trips to our second home in Oxford. Because of our involvement in the national political process, we chose to designate public policy as the major of recipients. Eddie and I plan to bring recipients to Washington as our guests to see firsthand how public policy is developed and implemented."

Martha Dale and Eddie Fritts began their life journey together as high school sweethearts in Union City, Tenn. After graduation, she enrolled at the University of Tennessee at Martin, while he enrolled at Ole Miss. While at UT-Martin, she became a founding member of the campus chapter of the Chi Omega sorority and serves as a national trustee on the Chi Omega Advisory Board.

After college, the two married and moved to Indianola, where they owned and operated radio stations in Mississippi, Arkansas and Louisiana for more than two decades. During this time, the Fritts family visited Ole Miss frequently with their children, who all attended or graduated from the university.

Their move to Washington came in 1982, when Eddie Fritts led the NAB for 23 years. A member of the Ole Miss Alumni Hall of Fame, he heads the political affairs firm he founded and represents many of the nation’s most prominent telecommunications firms.

The gift is part of the university’s MomentUM campaign, a four-year initiative to raise $200 million. The campaign, which ends in December 2008, already has raised more than $180 million for scholarships, graduate fellowships, faculty support, a basketball practice facility, residential colleges and a new law school on the Oxford campus. Also in the plans is a cancer center at the UM Medical Center in Jackson.

For more information about the Ole Miss Women’s Council in Philanthropy, visit