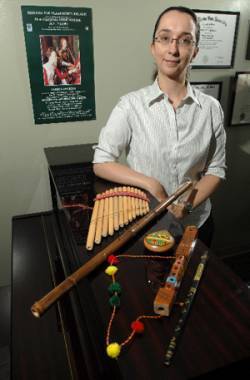 UM music instructor Linda Pereksta shows off several of the flutes donated to the Department of Music by the estate of Mary Lee Sneed Hill.

OXFORD, Miss. – Mary Lee Sneed Hill knew the power of music – how it can chase away the blues, and brighten the darkest days. That’s why, for more than 40 years, the University of Mississippi alumna shared her voice with the sick and shut-in, performing at nursing homes throughout Memphis and the Mid-South.

"To her, music was a way of communicating with people," said her son, Richard Dean Hill. "Whenever she sang, there was something special about her voice that brought out the joy and love in other people. That’s what she was trying to do – to communicate the good parts of humanity."

Mary Lee Sneed Hill of Memphis died in January 2007. But her family has ensured that her legacy will live on in the Mary Lee Sneed Hill Vocal Music Scholarship Endowment, established with a $25,000 gift, and a gift of flutes to the UM Department of Music.

The scholarship is to provide assistance to deserving students pursuing a degree in music in the College of Liberal Arts. Selection of recipients will be made on the basis of academics, leadership abilities and/or the display of talent in the vocal music field, specifically religious music. The family hopes a spirit of service will live on as well.

"We hope recipients will share their talents with those who need it most – the elderly, the poor and the sick," said Dean Hill, Mary Lee’s widower.

"We want to be able to pass her thoughts and attitude on life, through her music, to other people out there," said Richard Dean Hill. "If the recipient can convey that message, we’ve accomplished what we wanted to do."

Dean Hill also donated a collection of 54 flutes from around the world to the music department. He and his wife collected the traditional folk instruments during their missionary work to such exotic locales as China, Argentina, Yugoslavia, Haiti and Spain.

" The collection started with me and my father," Dean Hill said. "I traveled with the United Methodist Church as a missionary, and later Mary Lee said she’d go with me. And we’d go out on tourist-type visits, and our collections grew from there."

The flutes enhance the university’s efforts to include music from all cultures in its curriculum, said Ron Vernon, associate dean of liberal arts and professor of music. "We plan to use these instruments as resources in our world music and music appreciation classes," he said.

Linda Pereksta, a UM music instructor and former member of the Louisiana Philharmonic Orchestra, is also grateful for the gift. She knows these flutes will impact her students.

"With this gift, they will be able to gain a greater perspective of the flute outside of its Western category," Pereksta said. "These flutes will help open their eyes that the world is a bigger place."

To the surviving members of the Hill family, their gift is an extension of Mary Lee’s undying love of music and people. She earned a degree in music and fine arts from UM in 1941. She spent much of her life sharing her voice, and even after a near-fatal car accident in the 1970s, she continued to perform for the sick and elderly at nursing homes, said Richard Dean Hill.

"That was a miracle to me," he said. "She would be in such pain, but she wouldn’t turn anyone down. I went with her to nursing homes several times, and people would be sad for one reason or another. As I watched the people she performed for, I saw their faces go from sorrow to just smiling and clapping."

It was only after she suffered two strokes toward the end of her life that she was no longer able to give the gift of music, said Richard Dean Hill.

"She really lived and breathed music," he said. "Whenever she sang, there was something special about her voice. That was the magic she created."

For more information about the UM Foundation, go to http://www.umfoundation.com.