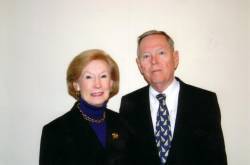 A University of Mississippi alumnus and his wife have honored Chancellor Robert Khayat with a gift of $300,000 to the Chancellor’s Trust.

Fred and Beth Jones of Columbus gave the money to show their support of Khayat’s leadership. Established in 1975, the UM fund is used at the chancellor’s discretion to address the university’s greatest needs. For example, the money may be used to enhance faculty development, provide scholarships or respond to changing demands.

Fred Jones, who graduated from the UM School of Business Administration in 1958, when Khayat also was a student, said that part of his motivation in giving specifically to the Chancellor’s Trust was his loyalty to Khayat’s vision for the university.

"I think this is the best way money can be spent," Jones said. "I support Chancellor Khayat and I don’t think anyone could match what he’s done for the campus. I had a wonderful time at Ole Miss and I hope students attending school there today will enjoy it as much as I did."

"Fred Jones is one of our outstanding graduates who has continued his interest in Ole Miss with his support," Khayat said. "We are most grateful for this generous gift."

The couple’s gift comes in large part in the form of an IRA rollover.

"This is an attractive option for individuals who wish to make charitable donations, as it eliminates all or part of the taxes that would otherwise be due on the amount withdrawn," said Wendell Weakly, president of the University of Mississippi Foundation. "Fred and Beth Jones are good friends to this institution and their gift will make a significant difference in the lives of our students and faculty."

Jones is president of Columbus Marble Works, which was established in 1846. He and his wife have two daughters, Perrin Kibler of Atlanta and Bethea Smith of Columbus. For more information about the Chancellor’s Trust, or to contribute to Ole Miss in other ways through the UM Foundation, call 662-915-5955 or 800-340-9542 or e-mail umf@olemiss.edu.