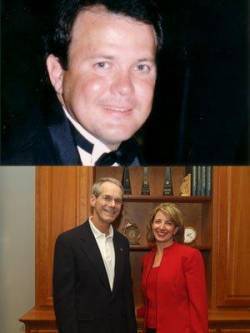 Ed Howard always had a zest for life. He especially loved horsing around with his nieces and nephews, spending time with his wife, Rita, and following Ole Miss sports. He never slowed down, even when he got sick, and was always trying new things such as watercolor painting and playing guitar. Rita remembers that one of Ed’s favorite tunes to strum was "You Are My Sunshine."

It’s fitting then, that for many students pursuing business degrees at the University of Mississippi, the Carl Edward "Ed" Howard Memorial Scholarship for Insurance Excellence may offer a ray of hope.

To ensure a lasting tribute, Rita Howard and her family and friends have endowed the scholarship with a $110,000 gift to Ed’s alma mater through the School of Business Administration.

"Ed really loved Ole Miss," Rita said. "We felt this would be such an appropriate way to honor him. I think this would have pleased him."

Ed, a native of Beaumont, earned his bachelor’s degree in finance in 1980. He moved to Dallas, where, through a mutual friend, he met Rita, also an alumna of UM’s business school. They hit it off instantly and were married in 1988. Ed worked most of his professional career at State Farm Insurance. He held various underwriting positions during his 23-year career.

In 2005, Ed was diagnosed with mesothelioma, a rare form of cancer. He lost his battle with the disease that same year.

He is remembered by many who knew him as fun-loving and full of life. More than 100 of his friends and co-workers at State Farm have contributed to the scholarship fund. Rita, who serves as State Farm’s vice president-agency in Houston, Texas, said she has been overwhelmed by the generosity.

The State Farm Companies Foundation matches charitable contributions up to $3,000 a year that State Farm associates, agents or retirees make to colleges and universities in the U.S. and Canada.

Recipients of the Ed Howard Memorial Scholarship are to be full-time students majoring in risk management and insurance. Contingent upon maintaining at least a 3.0 grade-point average, the scholarship may also be used for study abroad through the School of Business Administration during the summer of the recipient’s senior year. The recipient also is paired with a mentor, a unique aspect of the scholarship.

"We are deeply grateful for the generosity that Rita and her family have shown in making this gift as a remembrance of Ed Howard," said Larry Cox, chair of the risk management and insurance program. "This is a very special scholarship, ensuring that especially dedicated students who aspire to careers in risk management and insurance will get an education that will jump-start their careers."

The gift is part of the university’s MomentUM campaign, a four-year initiative to raise $200 million. MomentUM, which ends in December 2008, already has raised more than $160 million for scholarships, graduate fellowships, faculty support, a basketball practice facility, residential colleges and a new law school on the Oxford campus. Also in the plan is a cancer center at the UM Medical Center in Jackson.

To learn more about the Risk Management and Insurance program, visit http://www.olemissbusiness.com/insurance