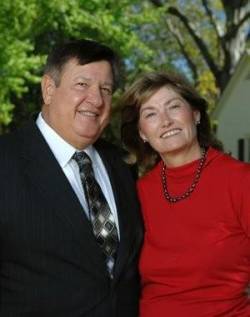 Ever since his father took him to visit a branch of the New York Stock Exchange, Michael Strojny knew he would grow up to be a businessman.

"I remember all the clack, clack, clacking," Strojny said. "It was very exciting, and I knew from then on that I wanted to work in business. My father was an engineer, but he was also a passionate investor, and I dreamed of the day I would be, too."

While at Ole Miss, Strojny met his future wife, Jane, a Pontotoc County native. They married in 1970 and would later become business partners as well. She earned her bachelor’s degree in education from UM and later completed a master’s in education from USM..

In 1975, the couple opened Strojny and Strojny Financial Services in Biloxi. The business started small, at their kitchen table, where they prepared tax returns for friends and neighbors. But it kept growing, and was moved from the kitchen table to a spare bedroom, then to the current six offices in and around the Gulf Coast. The business has grown to include tax, accounting and investment services, as well as business consultations.

Strojny credits much of his success to Ole Miss and his mentors while in school. That’s the reason he and Jane have given $100,000 to seed the Michael and Jane Strojny Scholarship Endowment in Business.

"Ole Miss was such a good experience for me," Strojny said. "I would like this scholarship to help someone who might not otherwise be able to stay in school. Plus, Ole Miss business students will play a part in developing the future leaders of our company. We recruit at least two or three Ole Miss students to come work for us every year."

"We are so grateful for this generous gift from Michael and Jane Strojny," said Shannon Woodward, development officer for the business school. "With scholarships like this one, the School of Business Administration can compete for the best and brightest students and continue to supply a top-notch business education for Mississippians."

Although Strojny grew up on the East Coast, just outside the Washington, D.C., metro area, he’s a Southerner at heart. His interest in history and studying the Civil War brought him down South for college campus tours.

"I knew I wanted to go to school in the South, and I looked at Emory, LSU and Auburn," he said. "But when I came to Ole Miss, I knew it felt right. It was small and homey. I knew it would be a good educational environment."

But he found that Ole Miss was more than history books and term papers. It was home, full of good friends and warmth.

"When there wasn’t a home football game, there was no one on campus on the weekends," Strojny remembers. I didn’t have a car, and people knew I didn’t really have anywhere to go because I wasn’t from around here. So someone in my dorm would always knock on my door and offer to take me home with them for the weekend. It was such a kind and considerate thing, and I quickly found out that’s the way Mississippians are."

It was also a place to grow his business.

"I felt the South would be the place to be in the future," Strojny said. "The economy was changing from an agrarian economy to being more business-oriented, so I felt there would be room for lots of jobs and room for growth."

As the family business grew, so did the family itself. They have a son, Michael. They also have a daughter, Jennifer, who received an MBA from Ole Miss in 1999. Jennifer met her husband, Kerry Milligan, in the Grove on campus. And so the Ole Miss tradition continues.

For more information on giving to Ole Miss, go to http://www.olemiss.edu/giving/.