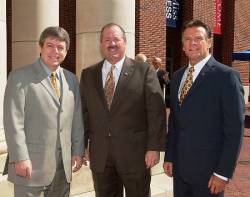 The company’s founders, Johnny Morgan and David White, are both graduates of UM’s School of Business Administration.

"We are overwhelmed by the generosity of Johnny Morgan and David White," said Brian Reithel, business school dean. "Our alumni’s involvement is so important to our business school and is crucial to the success of our current students. We are truly grateful to the MorganWhite Group for this wonderful gift."

The scholarship is to assist deserving students with demonstrated financial need in their pursuit of degrees in insurance or human resources management in the School of Business Administration. Scholarships are to be awarded in the amount of $1,000 per semester to full-time students who maintain at least a 3.0 GPA and can be awarded until the course of study is completed.

"We’ve had tremendous success, and we owe Ole Miss a lot of the credit," said White, who earlier this year provided six other scholarships for UM students to travel to London to learn about the international aspects of the industry. "We also wanted to give back to the business school to help create future leaders in our industry. One thing Ole Miss has done for us is create lasting business relationships that we would never be able to put a dollar amount on."

His business partner agreed. "We would challenge anyone that’s been successful in the insurance industry to support the industry by giving back to Ole Miss," Morgan said.

Morgan, who lives in Oxford, and White, who lives in Madison, first met as roommates their freshman year at Ole Miss. At that time, Morgan had a small laundry business and White was working for his grandfather’s equipment business. Both hard workers and budding entrepreneurs, they recognized talent and drive in each other early on and decided to join forces.

"We liked the idea of being in business together," Morgan said.

Morgan earned his business degree in 1970, and White followed in 1972. After toiling in a few other separate business ventures, the two made plans to go into the equipment business together, working for White’s grandfather. But when they learned the family business had been sold, they had to come up with another plan.

When Morgan learned about the IRS Section 125 cafeteria plan, which makes it possible for employers to offer employees a choice between cash salary and a variety of nontaxable benefits, he saw a niche in the insurance market. It was then that the two friends decided they could fill that niche.

"I didn’t know a lot about insurance," Morgan said. "But I saw an opportunity in the industry, and the idea grew from there."

They founded the MorganWhite Group in 1986. The business started out primarily focusing on payroll deduction supplemental insurance products and has expanded to include medical, dental and vision insurance and products especially designed for a senior market.

"David can work up a product for a market that fills a need better than anyone I’ve ever seen," Morgan said.

In keeping with the trend of introducing innovative solutions by offering insurance products that cannot be found anywhere else, Morgan and White recently started a seniors’ division. The MorganWhite Group formed MWG Senior Healthcare to assist seniors in understanding the numerous and sometimes complex changes taking place within the Medicare system.

In 2005, the MorganWhite Group was divided into two new entities, becoming MWG Employee Benefits Inc., a direct sales division, and MWG Marketing Inc., an employee benefits agency. The MorganWhite Group has offices in Oxford, Greenville and Miami, and many clients in the Caribbean and in Latin America who seek coverage in American hospitals and other U.S.-based medical facilities.

The gift is part of the university’s MomentUM campaign, a four-year initiative to raise $200 million. MomentUM, which ends in December 2008, already has raised more than $160 million for scholarships, graduate fellowships, faculty support, a basketball practice facility, residential colleges and a new law school on the Oxford campus. Also in the plan is a cancer center at the University of Mississippi Medical Center in Jackson.