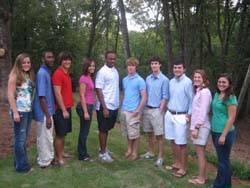 Since it was founded in 1848, the University of Mississippi has nurtured state and national leaders, and that tradition continues including special training opportunities through the Trent Lott Leadership Institute.

Ten freshmen enter UM this fall as recipients of the $40,000 Lott Leadership Scholarship, which includes association with the institute. The exceptional students are chosen for the awards based on their demonstrated leadership ability, academic performance and community service.

"This scholarship ensures that Ole Miss will continue its long tradition of nurturing strong leaders for our state and nation, and the caliber of these recipients proves that point," said Chancellor Robert Khayat, who invites the Lott Scholars to join the Chancellor’s Leadership Class.

Lott Scholars are required to pursue a major within the liberal arts and a minor in leadership studies. Besides maintaining academic standards, the students are expected to continue their commitment to community service. To help them balance these requirements, they are paired with faculty mentors in their major fields of study.

"I hope to ride this wave of opportunity through college and become an accomplished person. Without the Lott Leadership Institute, this would not be possible."

Other recipients are Chad Armstrong of Hattiesburg, Aubrey Beckham of Greenwood, Vince Chamblee of Fulton, Melissa Cole of Jackson, Andre Cotton of Madison, Elizabeth Joseph of Clinton, Jake McGraw of Oxford, Carmen Musgrove of Brandon and Artair Rogers of Guntown.

Armstrong, a graduate of Presbyterian Christian School, participated in the Lott Summer Institute for High School Students. He plans to major in mathematics and attend medical school. He has participated in several mission trips, served as a mathematics tutor and volunteered in community service. He was sports editor of his school’s yearbook. He is the son of Dr. William and Lisa Armstrong.

Beckham plans to major in biology and attend medical school. A graduate of Pillow Academy, she served as president of the student body, secretary of the National Honor Society and chair of Crown Club projects. She participated in the 2005 National Youth Leadership Forum on Medicine. Her parents are Glenn and Susan Beckham.

Chamblee plans to study economics and mathematics in hopes of establishing his own investment firm. A graduate of Itawamba Agricultural High School, he was president of the student body, Future Business Leaders of America, National Honor Society and peer counselors. He also served as captain of the marching band, football team and scholars’ bowl team. He attended the Lott Summer Institute for High School Students, Electric Power Association of Mississippi’s National Leadership Conference, Rotary International Leadership Conference and HOBY Leadership Conference. His parents are Tommy and Rita Chamblee.

Cole graduated from William B. Murrah High School, where she was vice president of the National Honor Society, co-editor of the school magazine and section leader of the marching band. She received the APAC Delta Award. She plans to major in biology and hopes to become either a psychiatrist or a neurosurgeon. Her parents are Willie and Carolyn Cole.

Cotten, a graduate of Madison High School, attended UM’s Lott Leadership Institute for Rising Eighth-graders. He plans to study biology and attend dental school. At MHS, he was president of his class for two years, and he represented the school as a junior ambassador to the Chamber of Commerce. He served on the Mayor’s Youth Council and volunteered for Big Brothers/Big Sisters, Relay for Life and the Make-A-Wish Foundation. He is the son of Gwendolyn Cotten.

Cox graduated from North Pike High School in Summit as salutatorian of his class. He plans to major in international studies, then attend graduate school and eventually work in an area of foreign service. In high school, he was team captain of the soccer club and president of both the student body and Mu Alpha Theta mathematics honor society. He participated in the Lions of Mississippi Leadership Conference. His parents are Ben and Dana Cox.

Joseph, a graduate of Clinton High School, plans to study liberal arts, then attend law school and possibly pursue a career in politics. She was president of her high school’s student body, a participant in Mississippi Girls State and recipient of the William Danforth Leadership Award. She is the daughter of Norman and Jane Joseph.

McGraw, a graduate of Oxford High School, is considering a major in political science, with plans to attend graduate school. He was editor-in-chief of his high school newspaper and president of Mu Alpha Theta. He participated in the Lott Leadership Institute for Rising Eighth-graders, the Cambridge College Program (United Kingdom) and the Mississippi Governor’s School. His parents are Ken McGraw and JoAnn O’Quin.

Musgrove plans to major in biology, with her eyes on medical school and a career in pediatrics. A graduate of Brandon High School, she was president of the student council and National Honor Society and vice president of Future Career and Community Leaders of America. She played on her school’s softball team and was team captain in 2005 when they won the state championship. Her parents are former Gov. Ronnie Musgrove and Melanie Musgrove.

Rogers plans to study pre-med. A graduate of Baldwyn High School, he served as president of his class, Future Business Leaders of America and the Beta Club, and he was co-editor of the student newspaper. He attended the Lott Summer Institute for High School Students and the Mississippi Governor’s School. His parents are Arthur and Inda Rogers.