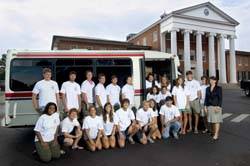 Rebel Ride shuttle service is to continue providing free transportation for the Oxford-University of Mississippi community this fall, thanks in part to a recent $30,000 gift from the Ole Miss Greek Fundraiser.

Fraternity and sorority members raised the money through a yearlong letter-writing campaign, requesting private donations from friends and relatives. The Greek Council voted in spring 2006 to donate a large chunk of the funds to Rebel Ride.

"This gift is huge," said SFASR faculty adviser Linda Spargo, UM’s special projects coordinator, academic adviser and instructor in the School of Business Administration. "I’m very passionate about Rebel Ride, because I think it’s important for our students to have a safe ride home."

The shuttle service has also received contributions through fundraisers by the group Students for a Safe Ride.

"Our No. 1 goal is safety," Trammell said. "We also want to provide transportation to people who may not have cars." He added that Rebel Ride is available to everyone in the community, not just UM students.

"It gives you a sense of pride when the buses pass by," said Scott Stewart, a sophomore SFASR member from Biloxi. "You know you are saving lives, which is crucial to the University of Mississippi."

"I think it’s fantastic," McNeal said. "But it does cost a great deal of money for Rebel Ride to exist."

Spargo estimates the shuttle service costs about $2,500 per weekend, with a semester budget of nearly $35,000. During the 2005-06 school year, more than 30,000 people took the Rebel Ride. To maintain the shuttle service in spring 2007, SFASR plans to sell T-shirts and already has a recycling drive under way. The organization has set up boxes around campus for students and faculty to donate used cell phones and printer ink cartridges for recycling.

"Cutting down on drinking and driving is a big thing," Killgallon said. "Many other campuses have shuttle programs too, and I think Rebel Ride is a very successful program that will make Ole Miss all that much better."