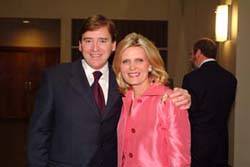 Proud of the strides made at the University of Mississippi in academics, athletics and facilities without marring the "emotion of Ole Miss," Dr. and Mrs. Darden North of Jackson have established a scholarship for deserving students.

The couple recently seeded the Darden and Sally North Ole Miss First Scholarship with a $25,000 pledge.

"Ole Miss has made tremendous strides academically, athletically and through expanded facilities since our graduation in the late 1970s," Sally North said. "All of these improvements have evolved without tarnishing the true tranquil and physical beauty that is the emotion of Ole Miss, and we’re grateful for that."

The couple designated that the scholarship be awarded to Jackson students who demonstrate exceptional leadership qualities and score between 24 and 28 on the ACT. The scholarship, established under the Ole Miss First program, is contingent on a recipient’s maintaining at least a 3.0 cumulative grade-point average. It can be awarded for a maximum of eight semesters.

"We hope that Ole Miss will become a lifelong experience for the recipients of this scholarship as it has been for us," Dr. North said. "This is a privilege to be involved in the education of an outstanding student who might not have otherwise been awarded a scholarship."

Originally from Cleveland, Darden received his bachelor’s degree in zoology from UM in 1978 and his doctor of medicine degree from the UM School of Medicine in 1982. He completed his residency in obstetrics and gynecology at the UM Medical Center in 1986, then established his practice at Jackson Healthcare for Women.

A native of Columbia, Sally Darden received her bachelor’s degree in English from UM in 1980. A former high school English teacher, she is a housewife, mother and a publisher with Ponder House Press.

While at Ole Miss, Darden and Sally North were both involved in student government and Greek life, and each served as editor of the Ole Miss yearbook. His interest in journalism has led to his writing and publishing two novels.

The Norths’ generational ties to the university include Dr. North’s father and three uncles, who were Ole Miss alums; Sally’s parents, who graduated from UM; and their children, William and Anderson, who are enrolled at Ole Miss.