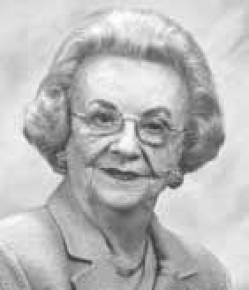 Emma Stroud Griffin of Meridian, Mississippi, always dreamed of completing her college degree. But time and history seemed to work against her. The fifth of eight children born to a small-town physician, she began college while the country was trying to cope with the Great Depression. World War II followed, and Griffin traveled with her husband, who was in the U.S. Army. During this time, she also had two children and became a full-time mother.
Throughout the years, Griffin never gave up the promise she made to herself to earn a college degree. Nearly 20 years later, she fulfilled that dream by graduating from The University of Mississippi with a bachelor’s degree in education.

Now her daughter, Jan Griffin Farrington of Jackson, Mississippi, pays tribute to her mother’s spirit and determination by endowing an Ole Miss Women’s Council for Philanthropy Scholarship in her name. The $100,000 deferred gift, set up through the University’s 1848 Society, will be designated for nontraditional students majoring in education.

“I admire Mother because she always wanted to go back to school, but devoted her time and effort to raising us (Farrington and her brother, Joe Griffin) and helping her community and church,” Farrington said. “Often times, women feel opportunities are lost to them once they take on the responsibilities and obligations of starting a family. I want to provide a scholarship for someone to do the same thing as my mother—go back and finish a degree when the time is right.”

Griffin grew up in a family that placed a high priority on education. However, when Griffin graduated from high school in 1932, she already had two sisters in school. It was decided she would attend Holmes Junior College, where her uncle was dean and her aunt a professor.

After completing two years at Holmes, Griffin studied for another year at Mississippi State College for Women (now Mississippi University for Women). She then attended UM for a semester but left to take a teaching job at a country school in Lone Star.

After two years of teaching, Griffin married. For the next 18 years, she devoted time to her family, church, and community. It was not until her youngest child left for college that she went back to school. With the encouragement of her husband and children, she completed her degree and returned to teaching—a profession she adored.

Farrington said endowing the council scholarship is the perfect way to honor her mother, especially since students who receive it will be chosen based on leadership potential and the desire to help others.

“Obviously the reason I want to honor my mother is because I love her very much,” Farrington said. “But above that, I always appreciated what she did for other people. She not only taught us to appreciate how fortunate and blessed we are, but that to whom much is given, much is required. She didn’t just say it. She taught by example.”

Farrington is married to fellow Ole Miss graduate Lawrence Farrington. They both have remained deeply involved with various programs at the University. She most recently helped found the Women’s Council for Philanthropy.

“The council gives women the opportunity to do what they do best—nurture,” Farrington said. “We want to mentor, provide scholarships, and open doors for young men and women. Our goal is for every student to have the care, the guidance, and means to fulfill his or her dream.”