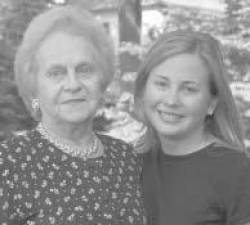 Susan Keith, a managerial finance major from Long Beach, wanted to give her grandmother something special for Christmas last year. She knew the holidays had been rough for Dorothy Graham Brown of Pass Christian since her husband, Keith’s grandfather, died on Christmas Eve four years ago.
So instead of the usual outfit or even household appliance, Keith came up with a gift that truly touched her grandmother’s heart. On Christmas eve, Brown learned that her granddaughter had endowed an Ole Miss Women’s Council for Philanthropy Scholarship in her honor.

Dorothy Graham Brown and granddaughter Susan Keith
With the deferred gift by Keith, Brown’s name is forever associated with the university from which Keith graduated in May. In addition, a plaque embossed with Brown’s name is to be placed alongside a rosebush planted in a special garden on the Oxford campus.
“My grandmother is the most giving person I have known in my entire life,” Keith said. “That’s why I think it is appropriate to name an endowment after her. She has shown me the importance and rewards of giving, especially in something for which you truly believe.

“The holidays, especially the last four years, have been a special time for my family—a celebration of his (Robert Ewing Brown’s) life and our lives together,” Keith added. “I was excited to have the opportunity to give her something she will not only enjoy, but also something special that can be named after her.”

After reading about the council en route to a University-sponsored leadership program in Washington, D.C., this summer, Keith knew it was a group she would like to support. However, the required amount to endow a Council Scholarship is $100,000—an amount the 21-year-old believed was way out of the league of someone who does not begin her first “real” job until June.

However, fate played a hand. While on the same trip, Keith met Ellen Rolfes, founding council member and UM advancement associate. Rolfes explained there are a number of ways to give to the council and even several options for someone who cannot endow a full scholarship at this time.

“I told Ellen that when I make my first million dollars, I would endow a scholarship,” Keith said. “She turned around to me and asked, ‘Why don’t you do it now?’ I thought she was pretty crazy.”

Crazy, indeed. Rolfes explained that Keith could invest in a life-insurance policy with a minimum payment each month. After Keith’s death, the proceeds will go to the University.

“I think it is amazing the deferred payment plan is available,” Keith said. “Almost any student can afford the insurance premium because of his or her age.”

“Every time I see Susan Keith involved in a project, I know it is worthwhile and will be a success,” said Chancellor Robert Khayat. “She has made significant contributions to life at Ole Miss, and I know she is destined for leadership.”

Rolfes said the emergence of young philanthropists, such as Keith, has a positive impact the future of UM in infinite ways.

“Susan Keith is a leader in this movement,” she said. “The Ole Miss Women’s Council is grateful to receive the first student endowment from such an extraordinary role model of new alums.”

“It is important in life to feel like you are making a difference,” she said. “I really feel the students who will be council scholars are going to be blessed. Their journey at the University will be so much more rewarding and fulfilling than students who have come before them.”