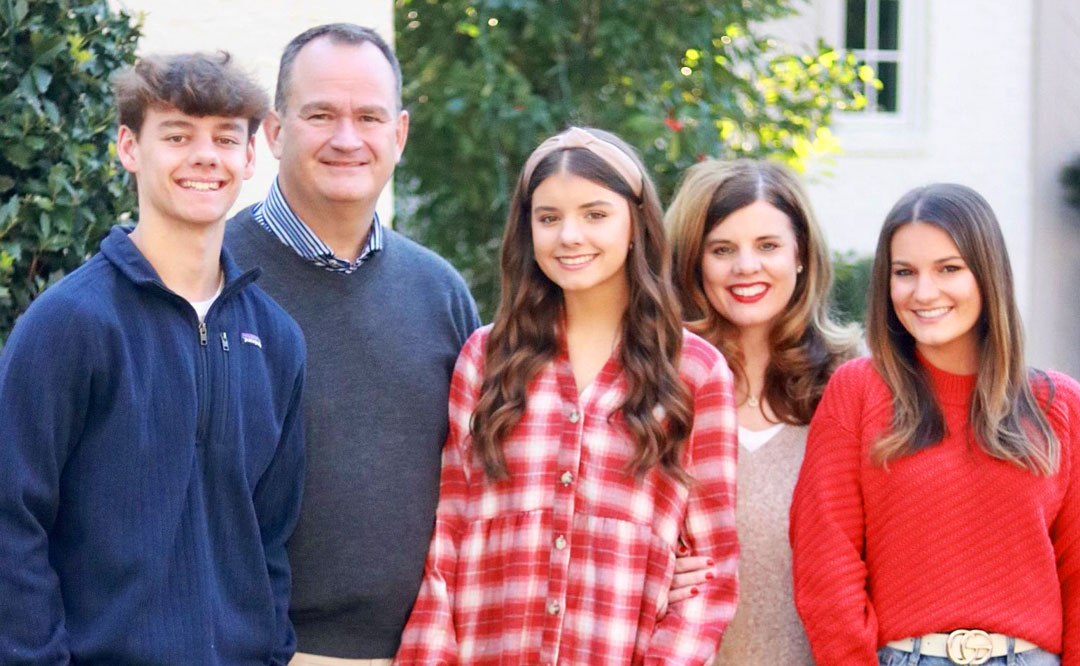 John Johnson was 13 years old in 1983 when he witnessed a miraculous event that gave the Ole Miss Rebels a victory over the rival Mississippi State University Bulldogs, salvaging a 6-5 season record and keeping the team’s postseason bowl hopes alive.

It was at that moment – when a wind-driven field goal deflection gave the Rebels a 24-23 win – that Johnson decided the University of Mississippi would one day be his alma mater.

Now the 1992 UM graduate is vice president and chief financial officer for Hood Companies Inc. of Hattiesburg, Mississippi. And he continues to support the Rebels.

Johnson and his wife, Stephanie, recently made a major gift in support of CHAMPIONS. NOW., the Ole Miss Athletics Foundation’s fundraising campaign focused on improving facilities for student-athletes.

That infamous Egg Bowl of 1983 was played at Mississippi Veterans Memorial Stadium in Jackson, Mississippi, the site of many such gridiron competitions in an era when Ole Miss’ other home stadium on the Oxford campus had limited seating capacity for fans of larger conference opponents.

Through the years, Johnson has seen the difference private support has made for the team he loves. Thanks to gifts like his and those of other Rebel fans, Ole Miss can now play all its games in Oxford.

“I think we take for granted that, very much in contrast to today’s hyped gameday experience, back then the Oxford campus’ location and its facilities simply did not create the same appeal to draw top-ranked conference opponents to play there,” said Johnson, who earned bachelor’s and master’s degrees in accounting from Ole Miss.

“I love telling my kids about seeing Vaught-Hemingway’s current press box and its original west side sky boxes under construction during one of my first Ole Miss campus orientation visits in 1988,” he continued. “I’ve told them about the excitement, during my junior year at Ole Miss, of the first night game played in a newly lit Vaught-Hemingway Stadium against Memphis on a 1990 September evening. It’s hard for them to imagine the Vaught without lighting, enclosed end zones and the giant, high-definition video boards.”

A CPA, Johnson began his career in the Memphis, Tennessee, office of Price Waterhouse LLP and subsequently moved to the Jackson office of KPMG Peat Marwick LLP. He joined Hood Companies in 2005 as the finance vice president of its building products manufacturing subsidiary, Atlas Roofing Corp. He has held his current position as vice president and CFO since 2009.

Stephanie Johnson, now a full-time homemaker, graduated from the University of Southern Mississippi (USM) and has held teaching and administrative positions in the Lamar County, Mississippi, school system.

The couple has three children: Anna Lea, a junior elementary education major at USM; Jon Brent, a high school senior planning to attend Ole Miss this fall; and Ally, a ninth grader who says she too wants to attend UM.

“I love getting to know donors like John who’ve had a love for Ole Miss Athletics from a very young age and have witnessed the amazing progress that private support enables for our programs and facilities,” McLaughlin said. “On behalf of OMAF, we greatly appreciate the Johnsons’ gift to CHAMPIONS. NOW. in support of our student-athletes and their ultimate success in sports and in life after graduation.”

Johnson said he’s proud to be able to give back to his alma mater, believing it’s the support from Rebel Nation that can take Ole Miss to higher levels in the SEC and in the national realm of athletics, academics and leadership.

“I saw all the improvements that began to happen in the mid- to late-1980s and in the 1990s to our athletics facilities and programs while I was at Ole Miss,” Johnson said. “I’ve also seen the university’s focus during the past two decades on solving many of the far-reaching social and cultural disparities that had for so long impacted Ole Miss. This outstanding progress made Stephanie’s and my ability to give to CHAMPIONS. NOW. even more satisfying today.”

To make a gift to CHAMPIONS. NOW., contact Matt McLaughlin at mlmclaug@olemiss.edu or 662-915-7894. CHAMPIONS. NOW. is part of Now & Ever: The Campaign for Ole Miss.