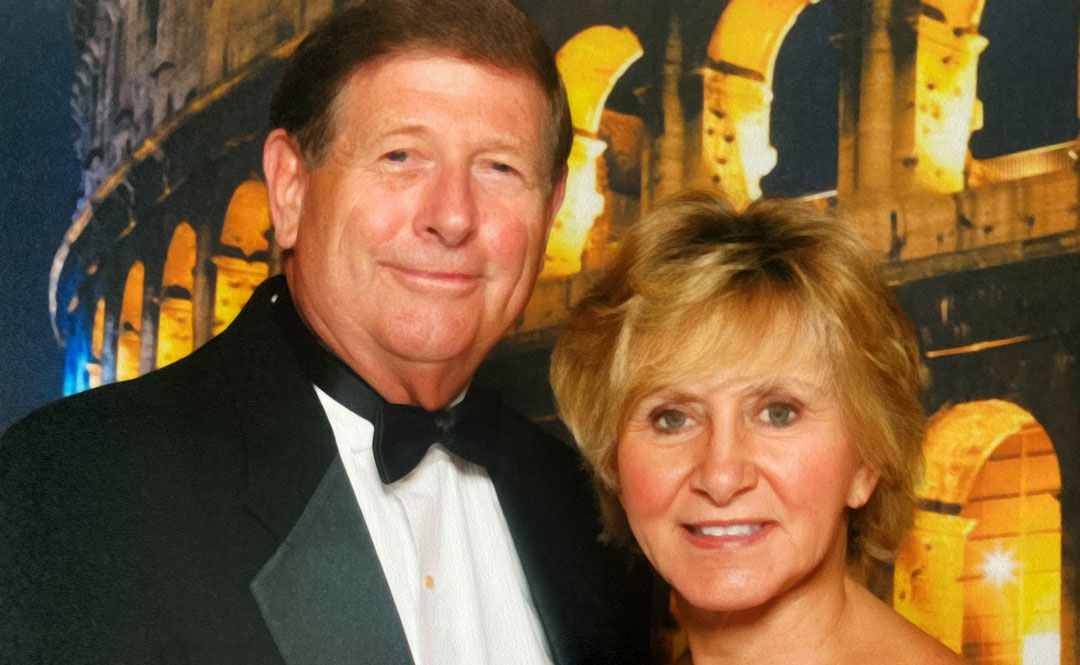 Nancy Stasiak Carden, right, pictured here with her husband, Carl, is being honored with a scholarship in her name benefitting Ole Miss School of Education students created by her sister, Dr. Katherine Stasiak Hankins.

Three generations of the Stasiak family are tied together with a dedication to education and a passion for the University of Mississippi.

The family’s relationship with Ole Miss began more than 80 years ago when Raymond Stasiak, a native of chilly Buffalo, New York, decided he wanted to attend a college located in a warmer part of the country.

In 1939, Stasiak enrolled at UM and earned a degree in chemical engineering. Years later, he returned to pursue a Ph.D. degree. His two daughters, Nancy and Katherine earned their degrees at UM as did Katherine’s husband, Dr. Jordan Hankins, and their two children, Nancy and Richard.

This new endowment awards a $2,500 scholarship, for up to eight semesters, to full-time students who are education majors planning to become teachers for children from kindergarten to eighth grade.

“This scholarship was set up in my sister’s honor because she has been a teacher for 50 years,” Hankins said. “In fact, she’s still teaching kindergarteners in California today.

“My sister has always been my role model and continues to be an inspiration to me.”

“Since she graduated from Ole Miss with an education degree in 1970, Nancy Carden has devoted her life to transforming many lives by being a dedicated and passionate teacher to elementary students,” Rock said. “Nancy is a true testament to our profession. This scholarship will honor her half-century commitment while continuing her legacy as an elementary teacher!”

Carden said her sister’s establishment of a scholarship in her name is an unexpected and humbling honor. The gift also illustrates her sister’s generous nature and their mutual support.

“We are so close, and we love each other dearly,” Carden said. “She’s always been there for me and I for her.”

The recent gift like the earlier endowment reflects the Stasiak family’s appreciation of UM’s impact on their lives.

The Stasiak family established the Ray and Helen Stasiak Chemical Engineering Scholarship at UM nearly 20 years ago to honor their father and mother, who have both passed, Ray in 2005 and Helen in 2016.

Ray Stasiak arrived on campus with few financial resources lacking the funds for a roof over his head and a bed to sleep in. The out-of-state student’s first home in Oxford was his car.

When university representatives discovered Stasiak’s living conditions, they found space for him to stay in the basement of what was the Old Chemistry Building, now named Brevard Hall and home to the School of Engineering.

“As our dad’s initial experience at Ole Miss shows, our family knows how challenging it can be to pay for college, so if we find we are in a position to help other students in need with a scholarship or other support, we want to do so,” said Dr. Hankins, who earned a bachelor’s degree in chemistry and biochemistry at UM in 1975 and went on to earn her medical degree from the University of Mississippi Medical Center (UMMC) in 1979.

After Dr. Hankins’ sister Nancy Carden obtained a degree in education at UM, she then earned a master’s degree in education from Old Dominion University. Because her husband, Carl Carden, was a pilot in the U.S. Navy, Nancy Carden worked as a teacher in many places, including Italy; Meridian, Mississippi; and Virginia Beach, Virginia. She devoted the past 32 years of her career to teaching kindergarten in California.

After their father, Ray Stasiak, earned his UM degree, he joined the U.S. Army and served in Germany during World War II, where he was injured. He later worked as a civilian for the U.S. Air Force for many years before retiring as the director of research and development at Wright-Patterson Air Force Base in Dayton, Ohio, and as the holder of two Air Force patents. He earned two more master’s degrees during his career.

Ray and Helen Stasiak returned to Oxford where Ray obtained a Ph.D. in education from Ole Miss in 1984. He served as a professor of chemical engineering at the university for 10 years and eventually served as the School of Engineering’s assistant dean.

The Stasiaks were active in the Oxford-Ole Miss community. He was honored by the university’s Woods Order for his many years as an engineering professor and supporter of the UM School of Engineering.

“Our role model is our father,” Katherine Hankins said.

“He was the first member of his family to attend college and to become a college graduate,” she said. “He loved Ole Miss and all that it did for him and his family. He was passionate about education and helping others. He and mom passed that on to my sister and me, and now both of our families share these same passions.”

“Daddy just started all of what we’ve been able to accomplish in our lives,” added Nancy Carden. “He made sacrifices for us to go to college and when my sister and I were children growing up in Dayton, we couldn’t wait to enroll at Ole Miss.

“So much of what we have and the opportunities we’ve enjoyed in our lives, we owe to the exceptional education and training we received at Ole Miss and the people we met there, as well as to the commitment we, as a family, have for one another.

“Our family feels blessed and wants to share these blessings with others.”