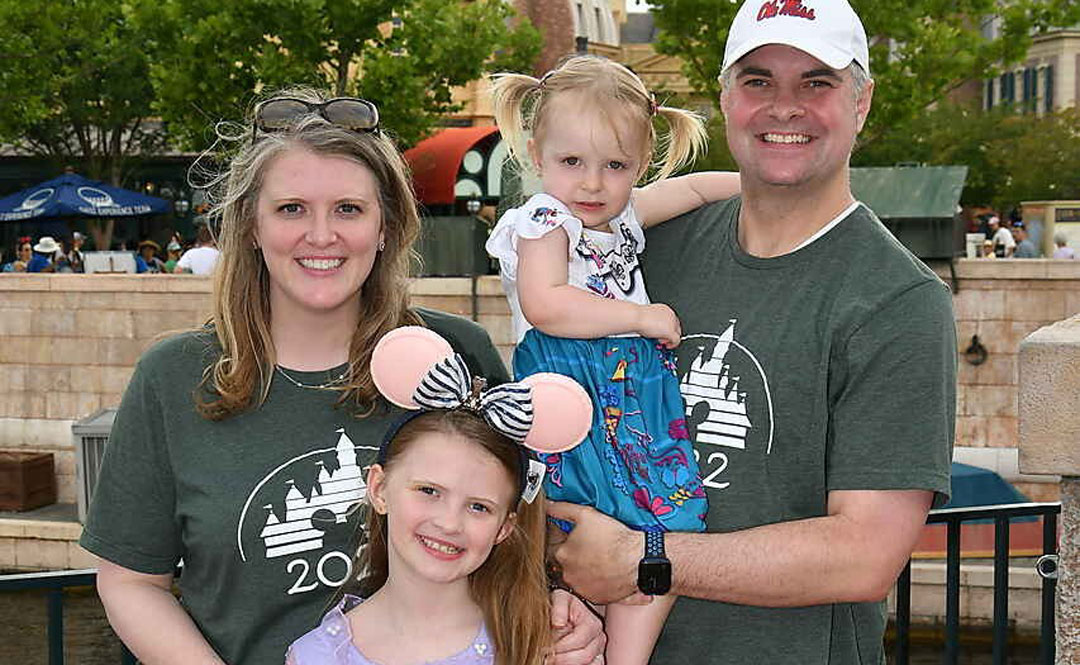 Careybeth and Marshall Rivers, pictured here with their daughters, have made a major gift to the Patterson School of Accountancy.

The University of Mississippi left its mark on Careybeth and Marshall Rivers. Now, with a gift of $50,000 to the Patterson School of Accountancy, the couple is returning the favor.

The Riverses’ gift will help support construction of the Patterson School’s new $70 million building in which a study alcove will be named in their honor.

Growth in student enrollment is driving plans for the 110,000-square-foot building to be located at the corner of University Avenue and Grove Loop overlooking the iconic Grove — prime campus real estate. The Patterson School is a national powerhouse ranked No. 8 in the country and No. 1 in the SEC by Big4AccountingFirms.org.

Marshall Rivers, 41, earned bachelor’s and master’s degrees in accountancy in 2003 and 2004, respectively; his wife received a bachelor’s degree in biology in 2004.

“Since we’re alumni of Ole Miss, it was very important to us to give a gift for the new building. It’s something we really believe in — for the school and for faculty members going forward,” Marshall Rivers said. “The school has a great reputation, and we think that the prominence of the location on campus will continue to draw the best and brightest, not only to Ole Miss but to the School of Accountancy.”

Marshall Rivers, a senior audit director for Regions Bank, and Dr. Careybeth Rivers, an orthodontist, began dating during their senior year of college and, after graduating, moved to Birmingham, Alabama, where they live now. The couple has two daughters.

A Union, Mississippi, native, Marshall had two older siblings attend Ole Miss, so UM was constantly on his radar.

“I always wanted to go there,” he recalled. Eventually, he was admitted to the university and offered a scholarship by Mark Wilder, now dean of the Patterson School.

“We are grateful to Marshall and Careybeth for their generous support of our new building,” he said. “We are proud of them and the wonderful careers that they are both enjoying. We believe this will easily be the finest stand-alone accountancy building in the nation. It will further elevate the national reputation and prestige of the Patterson School, and will help us pursue our goal of being the top ranked accounting school in the nation.”

Dr. Rivers, a Huntsville, Alabama, native, said she appreciates the opportunity to give back to the university in a meaningful way.

“My education from the university is something I truly cherish,” she added.

The Patterson School of Accountancy is nationally ranked for the 10th consecutive year of top 10 rankings. Over the past three years, the school has a total of eight recipients of the Elijah Watts Sells Award — the most prestigious CPA exam distinction world-wide. Over the 2020-2022 time-period, this ranks Ole Miss easily No. 1 in the SEC in number of Sells Award recipients and tied for fourth nationally.