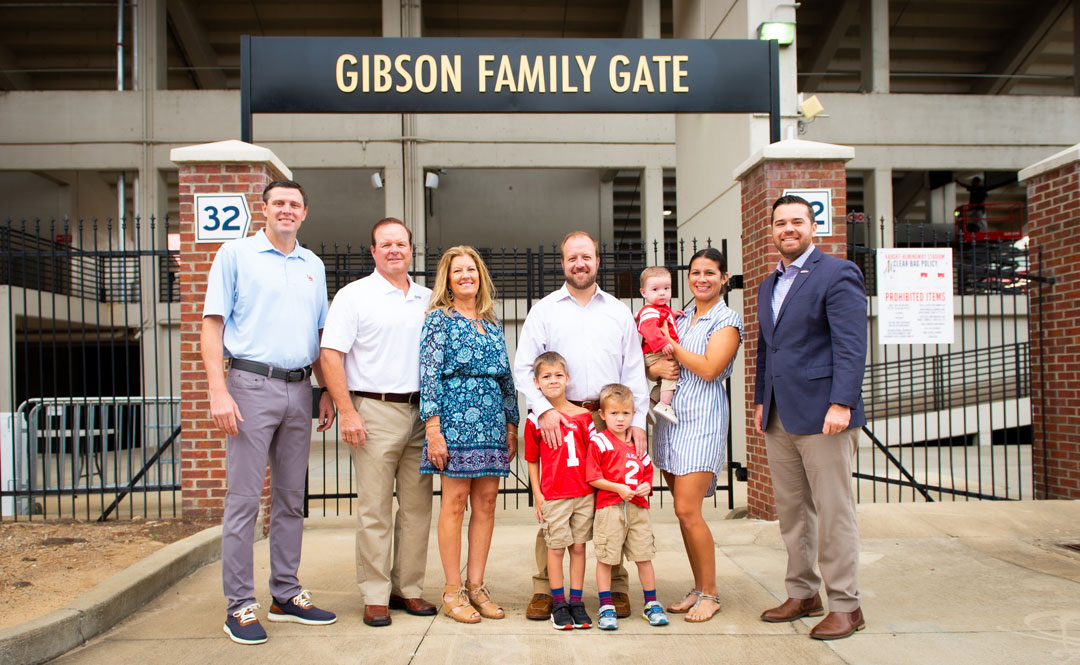 Terry and Charlie Gibson’s $250,000 gift to the University of Mississippi is being honored by the Ole Miss Athletics Foundation with a lasting family tribute.

“Our hope for the gift is to be a part of the university’s vision to equip our student-athletes, coaches and all support staff with what’s necessary to compete at the highest levels in collegiate athletics,” said Charlie Gibson, retired executive vice president over supply chain for Family Dollar.

The Gibsons, high school sweethearts in Meridian, Mississippi, remained together through college and graduated from UM in 1982 with bachelor’s degrees in business administration. Terry Gibson then worked as a financial advisor prior to starting a family. The Gibsons now have three adult sons, two daughters-in-law and four grandsons — all Rebel fans.

“Ole Miss has always been a special place for us. Last year we decided to make Oxford our home and really wanted to become a part of the fabric of the Rebel community,” Charlie Gibson said.

“Matt McLaughlin (chief development officer) was instrumental in getting us plugged in, and over the last year we met several others from the athletics department,” he continued. “We really appreciated their commitment to the student-athlete and pursuit of excellence. This gave us the desire to support the program.”

The Gibsons’ gift is part of the Ole Miss Athletics Foundation’s drive to honor donors with naming opportunities for each entrance gate at Vaught-Hemingway Stadium. Naming opportunities remain available for the grand gates at the north, east and west entrances as well as a limited number of individual gates.

“We are so grateful to Charlie and Terry for participating in our gate naming initiative, which plays an integral role in supporting Champions. Now., our campaign to bolster athletics at Ole Miss,” McLaughlin said. “This type of gift shows the Gibsons’ commitment to helping us make a transformative difference in the lives of our student-athletes.”

Terry Gibson said their fondest memories revolve around the lifelong friendships they developed as undergraduates at Ole Miss — he through Sigma Nu and she through Phi Mu — as well as those they’ve shared with other members of Rebel Nation gathered for ball games on campus.

“We love that awesome feeling you have on a fall Saturday in the Grove,” she said. “Ole Miss is special; the people are special; and we are confident that the Rebels will continue to do amazing things. Go Rebs!”

Champions. Now. is an ongoing fundraising campaign designed to support the expansion and renovation of the Olivia and Archie Manning Athletics Performance Center; the Ole Miss golf, softball and soccer complexes; and Oxford-University Stadium/Swayze Field.