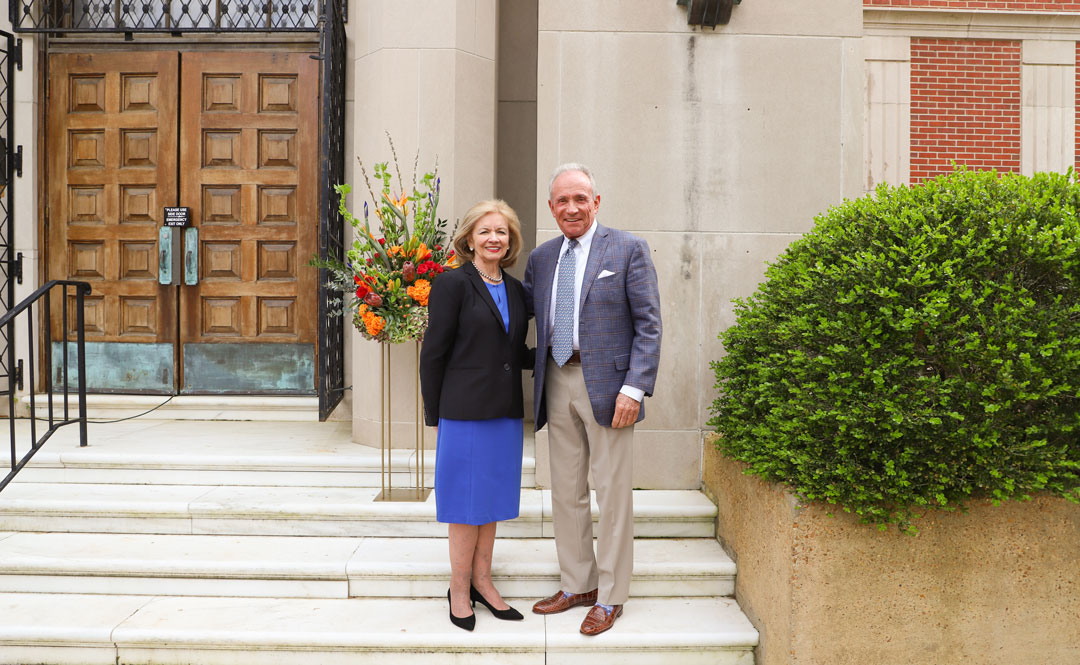 Melanie and Bill Roper made a $2 million gift to the University of Mississippi, establishing an endowment that will provide four-year scholarships in the amount of $10,000 annually to two entering freshmen each year. The Ropers’ gift will go toward Now & Ever: The Campaign for Ole Miss, a historic fundraising initiative to secure $1.5 billion in private gifts.
Photo by Kirsten Simpson

To say Bill Roper is driven is an understatement.

The Jackson, Mississippi, native has continued to work ever since he started selling tomatoes door-to-door at age 8. Back then, he used some of the money to buy model cars. Today, he collects the real thing — the kind he enjoys driving on the lush and winding Coast Boulevard overlooking the Pacific Ocean’s sapphire waves near his La Jolla, California, home.

Hard work, Roper said, is the foundation for his success and the reason he and his wife, Melanie, are able to make a $2 million gift to the University of Mississippi, establishing an endowment that will provide four-year scholarships in the amount of $10,000 annually to two entering freshmen each year.

The Ropers’ gift will go toward Now & Ever: The Campaign for Ole Miss, a historic fundraising initiative to secure $1.5 billion in private gifts to strengthen the university for generations to come.

“Our vision is that by supporting these students financially — and with the able assistance and guidance of the educators and staff at Ole Miss — we will be able to help identify and proudly produce any number of future leaders that will ultimately make our nation and the world a better place,” said Roper, a 1968 graduate of the UM College of Liberal Arts.

To be eligible for the Bill and Melanie Roper Scholarship, students must be enrolled in the Sally McDonnell Barksdale Honors College majoring in business, science, technology, engineering or math.

“Melanie and I would like to assist in producing more business or technology leaders for the future, and that starts with a STEM-related education. Those are the areas that have served me well,” said Roper, president of Roper Capital Company, a private investment firm that provides growth capital and management services to help small-to-midsize businesses create value and improve owner liquidity.

“Bill and Melanie have a great vision for the future with respect to technology and its role in society, specifically in the U.S. but also globally,” Boyce said. “Through their extraordinary generosity, they are effectively taking steps to ensure that our students become integral leaders within the landscape of tomorrow, and for that, we are very thankful.”

In addition to the other requirements, Roper Scholars must have a demonstrated record of academic excellence and leadership.

“My parents taught me that when you see something that needs to be done, you should jump in and take the lead,” Roper said. “So I was always the guy who volunteered to take on difficult assignments.  And along the way, I discovered that one of the ways to differentiate myself and be successful in business was to be willing to go above and beyond, take on additional tasks and lead.

“So, Melanie and I are hoping these scholarships will indirectly help develop leaders out of bright kids who want to impact their world, but maybe need a little extra boost.”

“This family’s generous gift will help us continue to attract some of the brightest students in STEM and business to the University of Mississippi,” said Ethel Young Scurlock, dean of the Honors College.

“Private support allows us to enrich the experiences of our citizen-scholars in the Honors College. Some gifts will change their lives by alleviating the burden of high tuition and fees while others will enable us to support students as they engage in High-Impact Practices,” she continued.

High-Impact Practices encourage students to excel beyond the classroom and can include practices such as conducting research alongside faculty members, traveling to national and international conferences, studying abroad and working unpaid internships.

“I want to be able to tell every student who excels in the Honors College that if they can dream big academic dreams, we will fight to find a way to fund those dreams,” she continued. “And that’s where private support like the Ropers’ is crucial.”

Roper himself attended Ole Miss with assistance from two scholarships and majored in math “because it provided logic and discipline, and honestly it was an easy subject for me,” he said. During college, he also worked as a dorm manager and math tutor in addition to selling class rings and fraternity pins for Balfour and clothing at Carl Coers, an on-campus retailer.

After college, he returned to Jackson to work for Deposit Guaranty National Bank and met his wife during that time. His career progressed from there. For 17 years, he was executive vice president of SAIC Inc., a diversified science and technology services organization, whose annual revenues grew from less than $1 billion to nearly $9 billion during his tenure with the company.

He also served as president and CEO of Verisign Inc., the leading global provider of internet infrastructure and security services and a member of the NASDAQ 100, where he was responsible for restructuring and repositioning the company.

The donor has also served on the boards of several public and private companies, along with active involvement in numerous civic and philanthropic organizations.

Roper said he credits his UM education not only for his degree but also for providing “the socialization, maturation and many of the things that I learned to be better prepared for a successful career and life.

“Education at all levels is a key ingredient in our society for future success — both personally and professionally, locally and nationally.”

But it was that introductory level — his first job selling produce to the neighbors — that taught him many of the lessons he would use throughout his career.

“I learned about margins and markup. I learned about inventory losses when I got lazy and let some of the tomatoes get soft before I could sell them because I was busy playing baseball or whatever,” Roper said. “And I learned about customer service, dependability and responsibility — so many of the important factors in life.”

The Bill and Melanie Roper Scholarship Endowment is open to gifts from individuals and organizations. To contribute, send checks with scholarship name noted to the University of Mississippi Foundation, 406 University Avenue, Oxford, MS 38655. Or visit give.olemiss.edu.

For more information, contact Angela Brown, director of development, at browna@olemiss.edu or 662-915-3181.