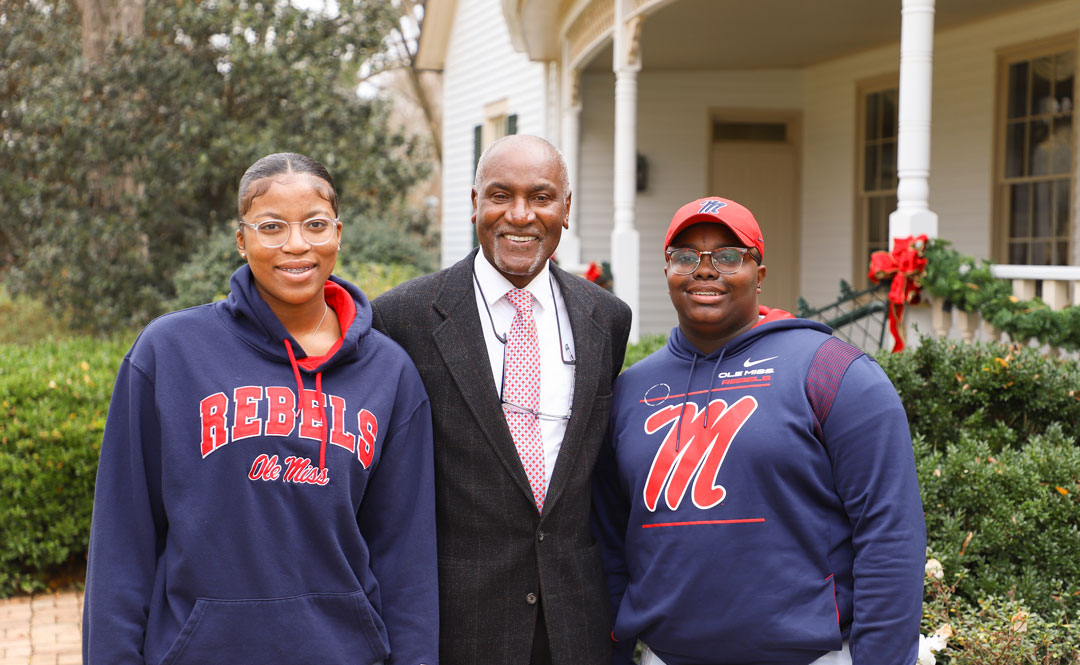 UM students Majestic Gay, left, and Frederick Williams — the inaugural recipients of the Donald Cole Catalyst for Change Scholarship — visited with longtime administrator and professor Don Cole, center, at Memory House, home of the UM Foundation. The scholarship honors and expands the 50-year legacy of Cole, who has retired from his alma mater. Photo by Kirsten Simpson

A student activist, a professor and a leader, Don Cole retired from the University of Mississippi but continues to impact the lives of Ole Miss students through a new scholarship endowment.

Majestic Gay and Frederick Williams — the inaugural recipients of the Donald Cole Catalyst for Change Scholarship — will expand Cole’s legacy beyond his more than 50-year relationship with the university. A host of alumni, colleagues, former students and family contributed almost $50,000 to the scholarship endowment in his honor.

“I was so happy when I found out I was one of the first recipients of this scholarship,” said Gay of Atlanta, Georgia. “Having this scholarship means a lot to my family and me, and it is a relief to know that I have support from this university for the future.”

“For me, being awarded this scholarship fulfills a dream I’ve had to come to the University of Mississippi since I was in the sixth grade,” said Williams of Greenville, Mississippi. “This allows me to dream big and pursue my goals.”

The endowed scholarship – the first of its kind established to help African American Studies majors – recognizes students who exhibit leadership qualities, a spirit of service and academic excellence.

While having a scholarship aimed at supporting students in the African American Studies program is especially important, naming it in Cole’s honor adds even more significance, said Derrick Harriell, interim director.

“Don Cole played a critical role in moving the needle for African American students at this university,” he said. “Dr. Cole has wholeheartedly supported the legacy of inclusive competence and the African American Studies program.”

“They are both dynamic, young scholars and students committed to service,” he said. “All of us who are a part of this program celebrate them. I have great hopes for what they will bring to the program, our university and the overall community.”

For Gay, the scholarship represents a way for her to connect with and continue the work of her grandfather, Dr. Peter Stoner, who was a freedom rider during the civil rights movement in the 1960s.

“He wanted to create a better America for all, and I want to build on his accomplishments and enhance his legacy in Mississippi,” said Gay, who is pursuing a double major in African American Studies and journalism.

“I would personally like to thank Dr. Cole for wanting to help the UM community by giving back to students who are seeking a double major in the African American Studies program and another field and to thank everyone who came together to raise the funding needed for this endowment.”

Williams is enrolled in the Accelerated Law program, also known as 3+3, in the UM School of Law and the African American Studies program, which will allow him to trim a full year off the time it would take to earn both degrees independently.

For Williams, the scholarship and Cole’s example as a role model inspire him to make a difference and help others.

“I want to thank Dr. Cole for paving a path for students like me and so many others,” Williams said. “The impact he has made on our campus and on the lives of so many others has influenced my plans to be someone who works to create positive change at the University of Mississippi and beyond.

“After gaining my law degree, I hope to be a defense attorney so I can be a voice for those who so often aren’t able to speak for themselves,” the UM student said.

Cole, who retired in 2019, said he continues to be honored by having a scholarship created in his name; now that the first scholars have been named, he is grateful to be able to observe how their lives impact their communities.

“My expectation of these students is not that they make A’s only in their academic studies, but that they also make an A in their efforts, their representation and their opinions, while carrying with them an A for determination after their time here at the university,” Cole said. “This scholarship has the potential to transform lives, and I look forward to observing this inaugural group of students.

“I realize the unique experience that this university can give these students both now and after graduation, and my wish for them is to take full advantage of the offerings — enjoying both the journey and the destination.

“Their success is my success and to that end I look forward to following their careers here at the university and beyond.”

Individuals and organizations can contribute to the Donald Cole Catalyst for Change Scholarship by sending a check to the University of Mississippi Foundation, with the endowment’s name written in the memo line, at 406 University Ave., Oxford, MS 38655. Gifts can also be made online by visiting http://umfoundation.com/ignite and selecting the Don Cole Scholarship from the drop-down menu.