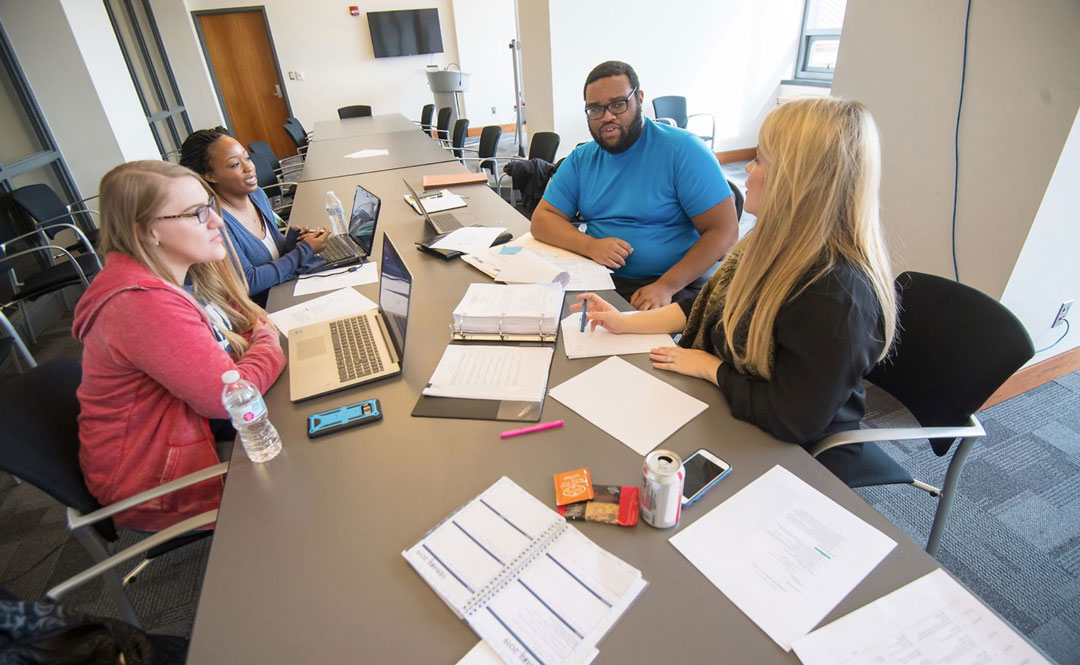 Ole Miss Law School students form a special bond as they work together to earn their degrees. Such friendships inspired the late William Krucks to give back. Photo by Kevin Bain

A new scholarship in the University of Mississippi School of Law stands as a testament to the experiences its namesake enjoyed at Ole Miss.

“What I know he would want the most is that the gift would allow others who come behind him to feel the way he did and to become the man and attorney that he was,” said Linda Krucks of Winnetka, Illinois, widow of the 1976 law alumnus. “These are gifts that we will continue to make to the university forever because he truly loved Ole Miss.”

“The Krucks’ gifts provide significant benefit to our students by enabling them to continue their education and achieve their goals while contributing to society in the field of law,” Duncan said. “I want to thank Linda because her family’s invaluable gifts will have a long-lasting, positive effect on our students, their communities, and ultimately our world.”

Krucks, who graduated first in his law class, served as editor of the Mississippi Law Journal and was a member of the Moot Court Board, passed away peacefully at his home on July 23, 2021, after a lengthy illness.

“William was very proud of his time on the Oxford campus,” his wife said. “It was the friendships he made there and the feeling of camaraderie. It was the education he received; he especially loved his professors. It was the customs and gentility and everything about the school, the entire ambiance. There’s no school like Ole Miss.

“He always said he saw himself ultimately being an old southern judge, which we used to tease him about mercilessly,” she continued. “If he could do it all over again, the only thing he would change is that he would never have left.”

In fact, Krucks chose Ole Miss Law School because he wanted to remain in the South after earning an undergraduate degree at Tulane University. After graduating from law school, however, he returned to his native Chicago to practice with a prominent firm. In 1983, he co-founded a new firm, Freeborn & Peters LLP, with five partners and six staff members.

“They moved into an unfinished space with no walls, rented metal desks and wires hanging from the ceiling,” said Roger Bickel, Kruck’s law partner and longtime friend. “Now, some 38 years later, the vision that William had at just 33 years old has grown to a law firm ranked among Chicago’s elite that employs more than 350 people across five national offices in four states.”

A lifelong student with a reputation for winning cases, Krucks was known to spend countless hours reading the latest legal opinions and new case law to ensure success for his clients, many of whom relied on him for decades.

During his career, he was named a Leading Lawyer in the fields of labor, employment and insurance defense law by the Leading Lawyers Network, a designation accorded to less than 5% of the nation’s practicing attorneys. Additionally, Krucks was nominated as a Fellow of the American Bar Foundation and of the College of Workers’ Compensation Lawyers.

“Despite his passion for the law, William’s storied life of accomplishment was not limited to the court room alone. He cared deeply about public service and felt it important to give back to and provide leadership for his community,” Bickel said.

He also served as a member of the Chicago Volunteer Legal Services Advisory Board and as chair, director, vice president and general counsel for the Rauland-Borg Corp.

When he wasn’t working, Krucks enjoyed spending time with his wife, their five children and five grandchildren. He also loved driving his Cigarette Racing boat, traveling on annual fishing trips with his friends, listening to rock ‘n’ roll and improving his golf game.

Individuals and organizations can make gifts to the William N. Krucks and Family Law Scholarship Fund by sending a check with the designation noted in the memo line to the University of Mississippi Foundation, 406 University Ave., Oxford, MS 38655; or online at https://www.umfoundation.com/makeagift.

For more information on supporting the School of Law, contact Suzette Matthews at suzette@olemiss.edu or 601-937-1497.