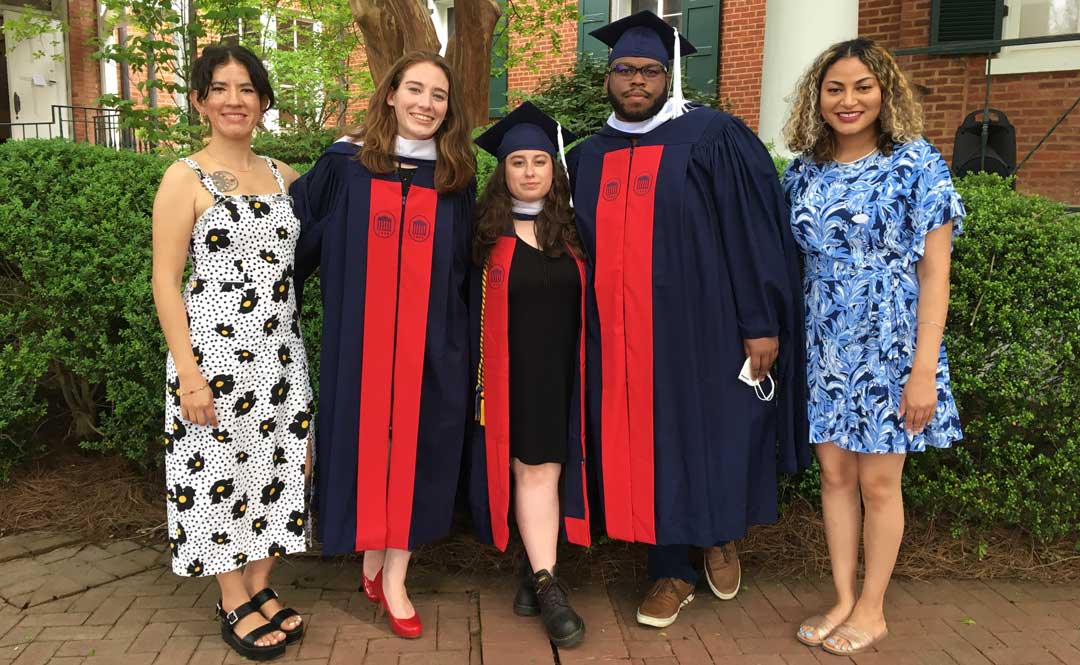 A gift from Marc Rosen of Atlanta, Georgia, establishes a fund to support graduate students at the Center for the Study of Southern Culture (CSSC). Photo by Jimmy Thomas

A trip to the University of Mississippi to learn more about the Center for the Study of Southern Culture (CSSC) gave tax attorney Marc Rosen the opportunity to continue his education in Southern literature, build relationships and impact the lives of Southern Studies students.

With a $55,000 gift, the Los Angeles, California, native established the Marc Rosen Fund for Graduate Student Support at the Center for the Study of Southern Culture. In the spirit of the university’s Now & Ever: The Campaign for Ole Miss, he is increasing his gift to $60,000.

The fund will be disbursed at the discretion of Katie McKee, director of the CSSC, in consultation with Lee Cohen, dean of the College of Liberal Arts.

“I wanted to support the academics at the heart of the Center,” said Rosen, who gives annually to the CSSC but wanted to increase his impact. “After talking with Katie, I asked her what her biggest need was, and we worked to establish a goal for which I’m now focusing my support of the Center.

“I’m elated to be of assistance in supporting the Center’s graduate students in their work to acquire a degree or degrees from Ole Miss, and, I hope to inspire others to join with me,” Rosen said.

McKee said the gift will make an immediate impact by allowing for the retention of Southern Studies graduate students and aiding in future recruitment to the program.

“We are very grateful for Mr. Rosen’s gift, which we plan to use to create graduate assistantships in the upcoming year,” she said. “We’re seeing more students coming to us knowing that they want to stay for three years, rolling from their MA to an MFA degree in Documentary Expression, and gifts like this one make a tremendous difference.

“It’s very gratifying,” McKee continued, “It’s also thrilling and very rewarding when someone like Mr. Rosen, who had no previous connection to Southern Studies or the university, comes to our events, sees the interdisciplinary conversations we’re seeking to facilitate and the research we’re pursuing, and wants to support that.”

Rosen, an avid reader of Nobel and Pulitzer Prize-winning novelist William Faulkner, became interested in the CSSC after hearing a lecture by Bill Ferris, CSSC founding and emeritus director.

“Bill’s presentation was amazing, and I decided to attend the university’s Faulkner-Yoknapatawpha Conference in 2018 to see what it was all about,” Rosen said. “And you know what? It was phenomenal! It was absolutely a continuing education experience for me.

One trip to Oxford led to another and another until Rosen, a friend member of the Ole Miss Alumni Association and member of the Friends of the CSSC, now makes at least four annual visits to campus for the Conference for the Book, the Faulkner-Yoknapatawpha Conference and two Ole Miss football games.

“I’ve met so many wonderful people on campus and in the town that coming back to the CSSC and to Ole Miss is like coming back to distant family members,” said Rosen, who with his wife Liz, has two grown children, Josh and Laura.

“I am blown away by the work being done at the Center, and the staff has done a fantastic job with what I call their outreach – such as the SouthTalks lecture series and various programming,” he continued. “I’m committed to giving my support and my time to help spread the word about the great things happening there.”

Rob Jolly, managing director of development for the College of Liberal Arts and a Southern Studies degree holder, said he is deeply grateful to Rosen for his generosity.

“Not only do we appreciate the meaningful investment that Mr. Rosen has made in our graduate students but we also salute him for being a lifelong learner. We are inspired by the trips he makes to our campus annually and thank him for being such an incredible ambassador for the Center for the Study of Southern Culture.

“What an impact Mr. Rosen’s gift will have on CSSC graduate students!” Jolly said. “This support will mean so much to our graduate students as they pursue intense interdisciplinary studies focusing on the many facets of the life, history and culture of the South.”

The Marc Rosen Fund for Graduate Student Support at the Center for the Study of Southern Culture is open to support from businesses and individuals. Gifts can be made by sending a check to the University of Mississippi Foundation, with the fund’s name noted on the memo line, to 406 University Ave., Oxford, MS 38655 or online at https://nowandever.olemiss.edu.

For more information about supporting the CSSC, contact Rob Jolly at jolly@olemiss.edu or 662-915-3085.