skip to Main Content
Gate Stands as Tribute to Past, Future Rebels 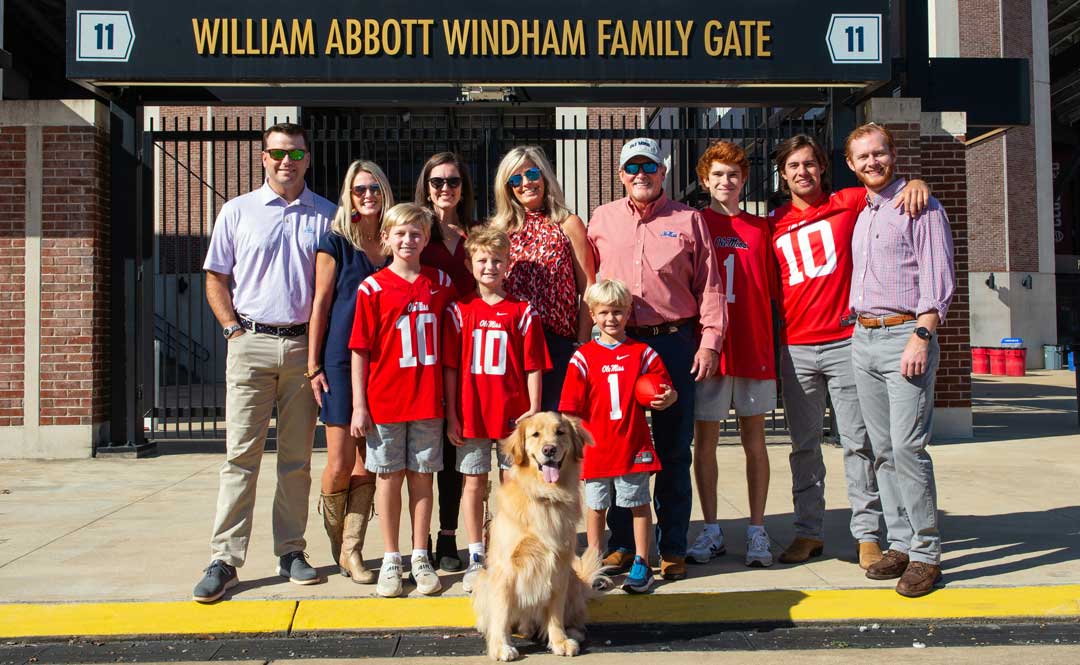 Gate 11 at the University of Mississippi’s Vaught-Hemingway Stadium represents past and future generations.

The William Abbott Windham Family Gate memorializes the life of an Ole Miss graduate while also honoring his great-grandchildren and namesakes: siblings William, Abbott and Windham.

“My dad lived and breathed Ole Miss and taught us to do the same, so I wanted this gift to honor him,” said Bill Windham of Bossier City, Louisiana, referring to his recent gift to Ole Miss Athletics, securing the gate naming. “I also want the gate to honor my dad’s grandchildren who are Ole Miss graduates and his great grandsons who will someday also be Rebels.

“I was fortunate enough to be surrounded by a lot of good, loving people who’ve helped me and blessed me in a way that allows me to be able to make a gift like this,” said Windham, an investor in real estate, casinos, health care, and oil and gas. “Dad would be very pleased to know this gift was made in his memory — and more so in honor of him.”

The elder Windham, a resident of Tallulah, Louisiana, died in April 2016. Born in Bastrop, Louisiana, he grew up in Georgetown, South Carolina, and served in the U.S. Air Force from 1951 to 1954.

A veteran of the Korean War, Windham graduated from Northeast Louisiana State University with a bachelor’s degree in education. Then, as a classmate of Rebel legends Robert Khayat and Jake Gibbs, Windham earned a master’s degree in school administration from Ole Miss in 1959. Also extending the footprint on the Oxford campus is his lifelong best friend, Denny Blomquist, who played Rebel baseball at the time and still holds two school pitching records.

After graduation, Windham returned to Louisiana where he worked as a math teacher and assistant principal at Tallulah High School for nine years before serving as principal of the school.

“Dad’s passion for education and care for children made him a strong, supportive leader for so many of his students. That’s why I felt that this gift was so appropriate. It stands at a university, representing a man who loved education and it honors young people — his grandchildren, great-grandchildren and the students at Ole Miss who will be helped by the gift,” Bill Windham said.

Vice Chancellor for Intercollegiate Athletics Keith Carter expressed gratitude for Windham’s generosity, which will bolster facilities and programs for student-athletes.

“Gifts like these are inspiring to others who may be considering whether the timing is right to give back to Ole Miss. Other potential donors will see Bill’s support and hopefully feel that they want to contribute too,” Carter said. “We are extremely grateful for his support and desire to see our student-athletes succeed in their particular sports, in the classroom and in life beyond college.”

Bill Windham grew up south of Tallulah on his family’s farm, the first catfish operation in Louisiana. They also raised cattle, cotton, corn, soybeans and rice.

“But Ole Miss was in my blood and still is,” Windham said. “When Ole Miss played Louisiana Tech during the Coach O years, I wore an Ole Miss shirt and a Louisiana Tech hat.” And he didn’t care who won.

Windham and his wife, Carol, have a home in Oxford and enjoy attending Rebel sporting events together. Their daughter, Summer Adams and her husband, Drake, graduated from the university in 2006. Her brother, Carter, is also an Ole Miss graduate in the Class of 2020; another brother, William, graduated from Duke University.

The elder Windham also has two other grandchildren, Kristen Patrick and Reagan Nosser, both Ole Miss graduates in the classes of 2006 and 2014 respectively, as well as current UM freshman Rob Mahaffey.

The Ole Miss Athletics Foundation recognized the Windhams’ gift by placing their family name on an entrance gate to Vaught-Hemingway Stadium.

“We are thrilled to be able to honor the Windham family and their philanthropy by having their name on such a significant part of Ole Miss Athletics,” said Fowler Staines, CEO of the Ole Miss Athletics Foundation. “We are grateful to Bill and Carol for the support they continuously give to our programs.”

For more information on how to support Ole Miss Athletics, visit http://givetoathletics.com or contact Fowler Staines, chief executive officer and chief financial officer of the Ole Miss Athletics Foundation, at 662-915-1143 or fowler@olemiss.edu.