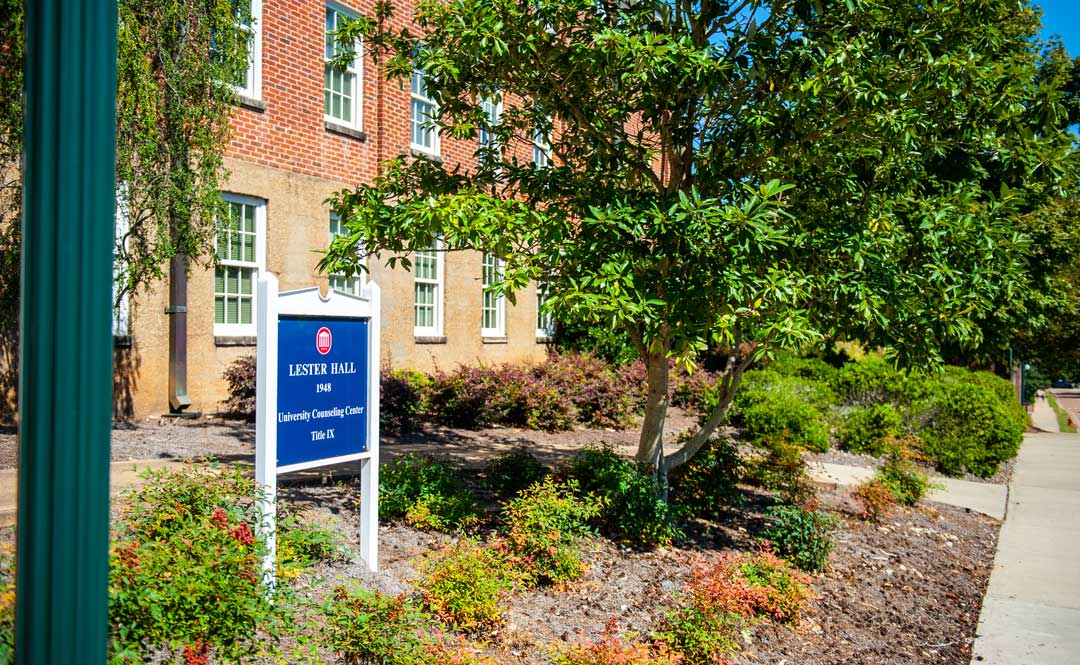 Lorry and David Rich recently made their second $250,000 gift to support the training and help offered by the University of Mississippi Counseling Center, located on the second and third floors of Lester Hall. Photo by Bill Dabney/UM Foundation

David Rich arrived at his decision to support the University of Mississippi Counseling Center by natural progression.

The retired Episcopalian and later Anglican priest has a lifetime of counseling under his belt, beginning with lending a listening ear to his children’s friends when they visited his Buffalo, New York, home, serving as a confidant to his parishioners throughout his 40-plus year ministry career and then founding and operating a counseling center for pastors.

Rich and his wife, Lorry, who now have homes in Stuart, Florida, and Ridgeway, Ontario, Canada, recently made their second $250,000 gift to Ole Miss — the first in 2015 to support the University Counseling Center, part of which funded the Transforming Lives Endowment, and the latest to establish the Counseling Center Training Program Fund.

Rich said their initial gift was awarded in response to the education their son, Brendan, received at Ole Miss. The Buffalo native graduated in 2013 with a bachelor’s degree in liberal arts, majoring in history. He now lives in Nashville, Tennessee, where he works as a talent manager for Wide Open Music.

“We were so thankful for his education there. It set him up to get a wonderful job and life in Tennessee,” Rich said. “We thought, ‘Let’s do something in the area that concerns us.’ What’s important to us is supporting Ole Miss students who are hurting. We want to support students who may have no ear to speak into, so they might find needed direction. That’s who we are.”

“These gifts mean so much to the University Counseling Center and, ultimately, to our students who may be facing a variety of issues including anxiety, depression, substance abuse and adjustment to college. I am extremely grateful to David and Lorry Rich for their generosity,” said Charlotte Fant Pegues, vice chancellor for student affairs.

The Counseling Center Training Program Fund supports the center’s educational mission: serving as a site for graduate students who learn professional skills and become better positioned to be credentialed or licensed.

“The professional doctoral training will provide support for staff clinicians, supervision for our student interns, and most importantly, individual and group services directly to our students,” Pegues said.

“You can’t ask for more than that,” Rich said. “I hope someday I’ll get reports back that indicate someone had been in trouble and received help here. Or maybe hear a report that tells how Ole Miss trained someone and now they’re very successful in their own counseling career.”

Born in Buffalo, Rich grew up in a family that was prospering in the frozen food business. His father, Robert Rich Sr., founded Rich Products Corporation after World War II and grew a business producing nondairy creamers and toppings. The business is now is a multinational manufacturer of deserts, seafood, Italian specialties, bakery doughs and finishers. David Rich graduated from Bradley University and Virginia Theological Seminary and chose ministry over industry, serving several years at St. Andrew’s Cathedral in Jackson and in Episcopal churches in Washington D.C., Kentucky and Buffalo.

Lorry Rich, a retired nurse practitioner with an interest in integrative medicine, received a bachelor’s degree in nursing from Boston College, a master’s in oncology through Roswell Park Cancer Institute in Buffalo and a second master’s in advanced nursing from The State University of New York at Buffalo. She later served on the boards of Buffalo Children’s Hospital and MadCAAP, a community center for the underprivileged in Canton, Mississippi.

“We think counseling is a need on every college campus,” Rich said. “Most campuses have some sort of counseling available whether individually through departments or references to services available in the community. Ole Miss has a place where students can know that people care about them, a place where, if they need somebody, they’ll find them there and they’ll be blessed.

“The center helps bring counseling out of a very dark place where nobody talks about it,” he continued. “If you get in trouble here, you’ve got a hand, or if you need direction, you’ll find it here. That’s the sort of thing we are hoping for.”

Rich witnessed the transformative impact of counseling many times.

“I always felt that God honored me by sending His people to me to listen to and direct. It was really an honor that I felt had been given to counselors.

“I don’t know exactly what form of counseling is going on at Ole Miss but I know that people are listening and are getting helped, and that’s the greatest thing in the world to me.”

Rich and his wife enjoy spending time with their six children and 12 grandchildren. They watch Rebel football together and cheer on the Buffalo Bills whose former stadium was named for Robert Rich. At home in Florida, they’re frequently found on their boat, gently cruising along the St. Lucie River.

Individuals and organizations can make gifts to the University Counseling Center by sending a check with the designation noted in the memo line to the University of Mississippi Foundation, 406 University Ave., Oxford, MS 38655; or online at www.umfoundation.com/makeagift.

For more information, contact Brett Barefoot, senior director of development, at bmbarefo@olemiss.edu or 662-915-2711.