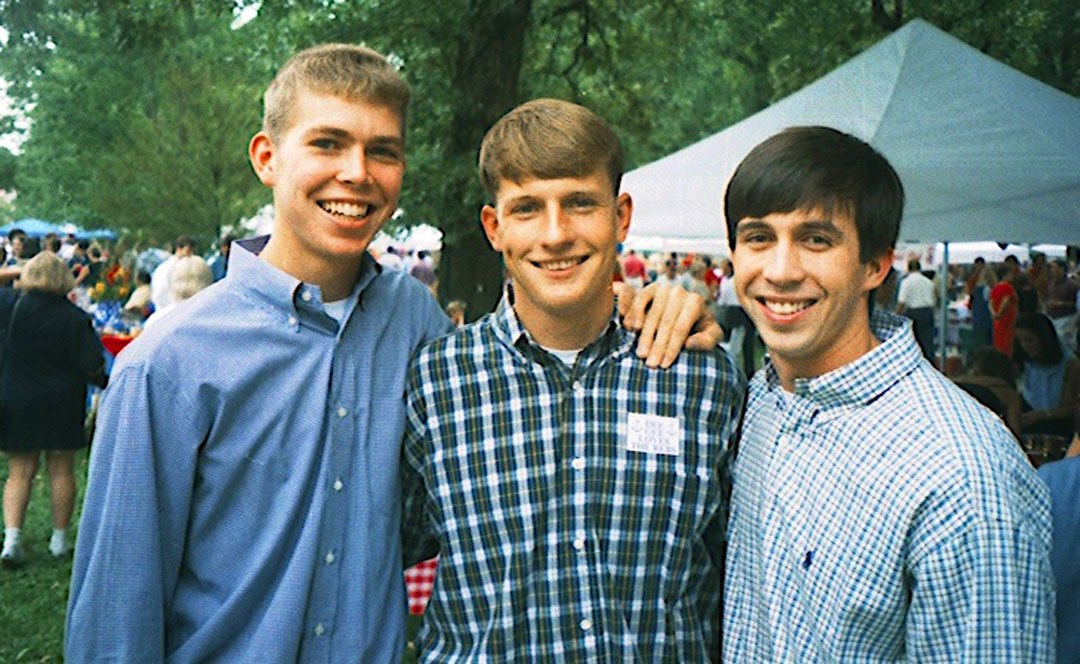 Tommy Tosh (left) and two of his best friends, Jason Bailey (middle) and Jonathan Walker (right) are pictured in the Grove prior to the Arkansas State - Ole Miss football game on Sept. 11, 1999.

This month, Tommy Tosh’s family and friends in Oxford, Mississippi, and throughout the country will mark the 20th anniversary of the young man’s untimely death.

Tosh, a University of Mississippi senior and dedicated Rebel fan, died Sept. 29, 2001, from injuries he suffered in a car wreck near Nashville, Tennessee. He and some friends were involved in what was determined to be an unavoidable accident as they drove to Lexington, Kentucky, for the Ole Miss Rebels and Kentucky Wildcats football game.

Oxford native, 21-year-old Tosh touched the lives of hundreds of local community members and Ole Miss alumni and continues to have a positive impact.

Through the generosity of his family and friends, Tosh’s joyous spirit lives on through the Tommy Tosh Memorial Scholarship at Ole Miss. As a way to celebrate his life, honor his memory, promote his supportive attitude toward others and cherish his kind nature, the scholarship was established in 2004.

Over the years, the scholarship endowment has grown, providing more assistance to more students. It now offers $5,000 a year for four years to four students at any given time.

The scholarship’s goal remains the same: to assist Oxford High School graduates who are passionate about the community and Ole Miss.

Kyle Gordon was only seven months old when Tosh died. Now, this Tommy Tosh Scholar and junior in UM’s School of Applied Sciences is learning the skills he needs to help others.

“I’ve wanted to become a speech-language pathologist since my freshman year at Oxford High, and Ole Miss is providing me with a high-quality education and a supportive community that is encouraging me along the way,” Gordon said.

Majoring in communication sciences and disorders and minoring in education, Gordon wants to assist those who have speech, language or hearing disabilities.

“As a recipient of the Tommy Tosh Memorial Scholarship, I’ve been given the opportunity to attend the college in my hometown that I absolutely fell in love with at an early age,” he said.

“I want to thank the late Mr. Tosh, and his family, friends and supporters who created this scholarship. I hope they know how much I appreciate all they have done to provide me and so many others with the opportunity to obtain an education and provide us with a path to a rewarding career.”

Mary Sloan Thompson of Oxford, one of Tosh’s classmates and friends, spoke to the person he was.

“Tommy would be so humbled to know that so many people who loved him came together to establish a scholarship in his name for Ole Miss students like Kyle to achieve their academic and professional dreams,” she said.

Thompson recalled how Tosh made friends with a wide variety of his fellow students and was frequently elected class president.

“That was because everyone just enjoyed being with Tommy,” she said. “He was a good guy with a good heart so he had friendships with pretty much every type of person in high school. He was popular because he was relatable.

“Tommy also had the best smile. He just lit up the room and instantly made you feel good. You wanted to be where he was because he was so very genuine. Even though his life was short, I think what a huge blessing it was for him to have the kinds of friendships that he had,” she said.

After his death, friends established the Tommy Tosh Golf Classic to raise money in his memory because golf was Tosh’s favorite sport. Eventually, as the friends grew older and gained work and family responsibilities, the fundraiser ended.

“That’s when we said, ‘We’ve got this money, what should we do with it?’” Thompson said. “We all knew how much he loved Ole Miss, so we set up this scholarship. The only criteria was that the recipients would be graduates of Oxford High School and be passionate about their community.”

The scholarship endowment also grew from continuing gifts from friends and Tommy’s family, including his parents, retired UM real estate professor Dennis Tosh and his wife, Beth, and their children, Christine Tosh Rayburn and Denny Tosh, all of Oxford.

“Tommy has the best family, and his parents have been enormously generous to the memory of their son Tommy, the local community and the university,” Thompson said.

Ben Peeler a Tosh Scholar and school of business administration student has his eyes on a career as a lawyer. He appreciates the inspirational life that Tosh lived.

“I’m enormously grateful for the Tommy Tosh Memorial Scholarship and those who provided me with this academic opportunity. What is equally important, if not more so, is that the members of the Tosh family are the kindest people I’ve ever met,” he said.

“This scholarship is one of the greatest honors I’ve ever had, and nothing makes my day like being able to talk with the Tosh family and know I have their support and encouragement.”

In addition to the scholarship endowment, Tommy Tosh continues to have a life-changing impact on others long after his death, which speaks to his Christian faith, Thompson said. This was one of many topics Tosh and Thompson often explored even after Tosh enrolled at Ole Miss and Thompson attended the University of Alabama.

“It wasn’t until we went to college that I realized what a heart Tommy had for Jesus,” she said. “He was really involved with Campus Crusade. While he always went to church when we were growing up, it was as a college student that he started to step out in his faith. He led Bible study classes and was a leader in that capacity.”

“While Tommy set in motion many campus programs and initiatives, the one that I like to share is how he really loved the inspirational Christian book about the life and nature of Christ, ‘More Than a Carpenter,’ written by Josh McDowell,” Jenkins recalled.

As fraternity chaplain, Tosh purchased 70 copies of the book for Sigma Nu pledges and asked them to consider the book’s themes.

“Tommy passed away within just a few weeks of doing this, and our student leaders were so touched by Tommy’s example that they ended up getting together and purchasing more than 10,000 copies of this book and gave them to students across campus; each book contained a sticker noting that the book was in memory of Tosh,” Jenkins said.

“The author, Mr. McDowell, heard about this and he was so moved by what had happened that he called me and asked whether he could do anything for our university. We invited him to come to campus and speak to our students and close to 4,000 students heard his message.”

Jenkins and Thompson say Tosh’s life may have been short, but he led many people to a deeper faith.

For his family, Tosh is always with them.

“Not a day goes by that Tommy is not missed,” said his sister, Christine Rayburn. “We are forever grateful for Tommy’s smile, his humor and his deep love for his God, family and friends.

“Even after 20 years, the very best of Tommy can still be seen and felt through those who knew him. Our family continues to be blessed by acts of kindness and sweet remembrances from those who loved Tommy so well.”

Individuals and organizations interested in contributing to the Tommy Tosh Memorial Scholarship can send checks to the University of Mississippi Foundation, 406 University Ave., Oxford, MS 38655 with the fund noted in the memo line, or give online at https://give.olemiss.edu.

For more information, contact Charlotte Parks, vice chancellor of Development at cpparks@olemiss.edu or 662-915-3120.