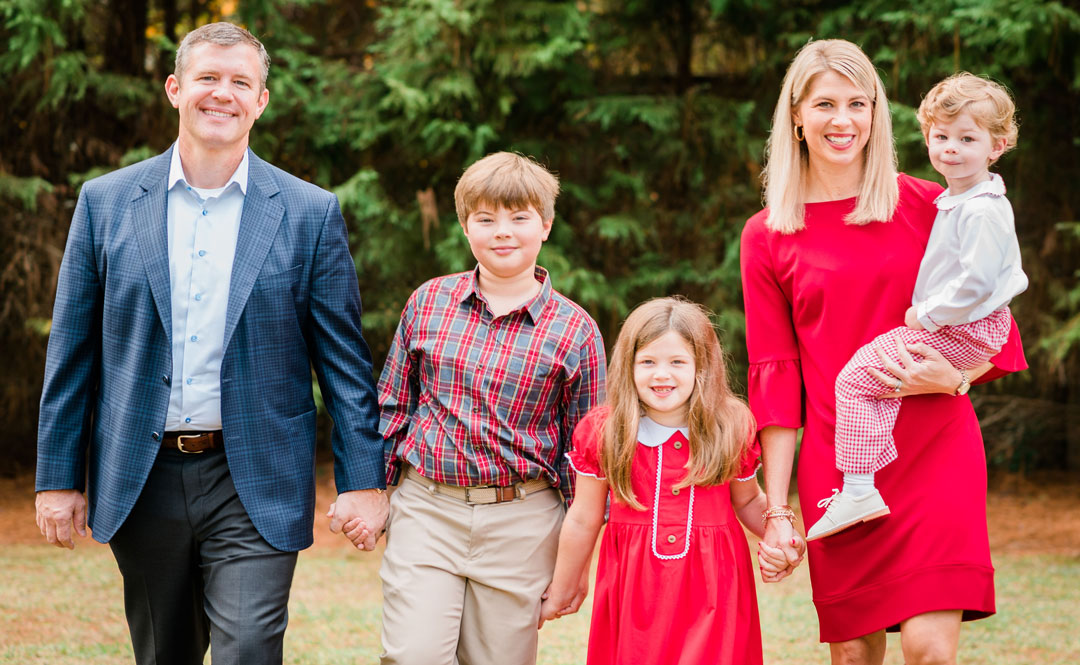 Abb and Jennifer Payne's transformative gift is helping to recruit talented esports players to Ole Miss. Here, they're photographed with their children (from left) Ford, Arden and Duke.

University of Mississippi alumnus Abb Payne of Hattiesburg, Mississippi, his wife, Jennifer, and their family are football fans who tend to spend fall weekends at university stadiums. One family member, however — the Paynes’ 10-year-old son, Ford — prefers the online gaming competitions of esports over the traditional gridiron.

Thanks to the family’s transformative gift to Ole Miss Esports, the university now has the resources to continue building a program that helps recruit students and talented esports players, and particularly appeals to those interested in science, technology, engineering and mathematics (STEM) fields.

“My son is into gaming more than football, and at first it was something fun for us to do together. Then, I started to see the tournaments, the athletes and all that went into holding these events,” said Payne, a graduate of the Ole Miss School of Business Administration.

“Jennifer and I discovered that through the Ole Miss Esports program, students are learning about STEM applications, broadcasting skills, creative functions and more. We think it’s important that the university continues to evolve to teach students in environments they understand and desire, and esports will do just that.”

The Payne’s gift will provide funds to renovate existing space into the Payne Sports Facility within the E.F. Yerby Center; support for operational expenses such as team travel, technology and staff; and income to recruit, retain and support students in the esports program.

First founded as a student club in 2017, Ole Miss Esports transitioned to a university program in January of 2019 shortly after the group hosted a successful Esports Egg Bowl competition with the rival esports club from Mississippi State University. Provost Noel Wilkin encouraged the group.

“Esports appeals to students enrolled in many of the programs of the institution and the growing esports industry capitalizes on the skills of storytellers, graphic artists, computer programmers and people who pursue marketing, communications, engineering, artificial intelligence, computer science and business,” Wilkin said.

“Every time the university adds an excellent program that is in demand and appeals to the passion and abilities of students, we stand to increase the number of students who choose to pursue their education at our institution,” he said. “Given the level of interest in gaming and esports, I expect that this will attract students to our university and this program.”

Stanford University is credited for holding the first official video game competition in the early 1970s and, while esports may have a long history, an increased accessibility to the internet has led to an explosion in popularity on college campuses around the globe.

In 2020, according to Finances Online, the estimated value of the global esports industry was $947.1 million, with 32% of internet users watching esports tournaments being ages 16 to 24.

For Payne, esports’ appeal to STEM majors cemented his family’s decision to support the program.

“The most appealing part to me is that it doesn’t come with any baggage because esports is so new and there are no rules limiting how it can grow,” Payne said. “The impact we can have in supporting it will be a thousand-fold on what you can have on a traditional program.”

“The current club has done a wonderful job with limited resources. We are extremely confident that through our targeted gift, Ole Miss can attract the future Michael Jordans of esports and make our LandShark team a championship-caliber program,” said Payne, who serves on the University of Mississippi Foundation Board, Campaign Steering Committee and Ole Miss Alumni Association Board.

Ole Miss Esports Program Coordinator Jimmy Palmer oversees nine varsity teams composed of 52 Ole Miss student-athletes, with another dozen students who serve as team chairpersons and assistants. The student-athletes compete against others at more than 100 colleges and universities across the United States and Canada.

“The best word I can think of to describe a gift like this one from the Payne family is transformational. For two and a half years Ole Miss Esports has not had a consolidated place to practice, has been unable to offer scholarships, and has not had a facility to hold events,” Palmer said.

“The Payne family gift helps address those issues, and I believe this investment will lead to Ole Miss being known as the premier esports program in the SEC and also one of the top programs in the country.”

Grace Ann Alexander of Monticello, Mississippi, a junior majoring in integrated marketing communications, serves as the program’s social media coordinator. Alexander credits their esports experience for their ability to land an internship as well as their first byline on a press release.

“I grew up without internet and had to play offline single-player games. To come to Ole Miss and have the Payne family’s support is beyond my wildest dreams. It really goes to show that people are realizing that esports is the future and is worthy of investment,” Alexander said.

For Jennifer and Abb Payne, supporting the program is also a way to level the playing field for current and prospective students, including those who call Mississippi home.

“There is a mentorship aspect to the scholarship fund that we are really excited about,” Jennifer Payne said. “Abb and I are eager to interact with these students, and hopefully we’ll be able to guide them in finding connections in this emerging industry.”

The Paynes also have hosted Ole Miss recruitment events for students in south Mississippi. Their contributions to Ole Miss Athletics have been honored with the naming of an entrance to the Sandy and John Black Pavilion at Ole Miss, the basketball arena. In addition to Ford, they are the parents of daughter Arden and son Duke.

Abb Payne is the founder and CEO of Payne Companies, a family office and investment manager to its own and other diversified entrepreneurial endeavors. The company owns, co-owns and manages home health and private duty companies, specialty pharmacy operations, multiple assisted-living facilities throughout the southeastern United States, and many other various businesses.

The Payne Esports funds are open to support from individuals and organizations. Gifts can be made by sending a check to the University of Mississippi Foundation, with the fund’s name noted on the memo line, to 406 University Ave., Oxford, MS 38655 or by giving online at https://give.olemiss.edu.