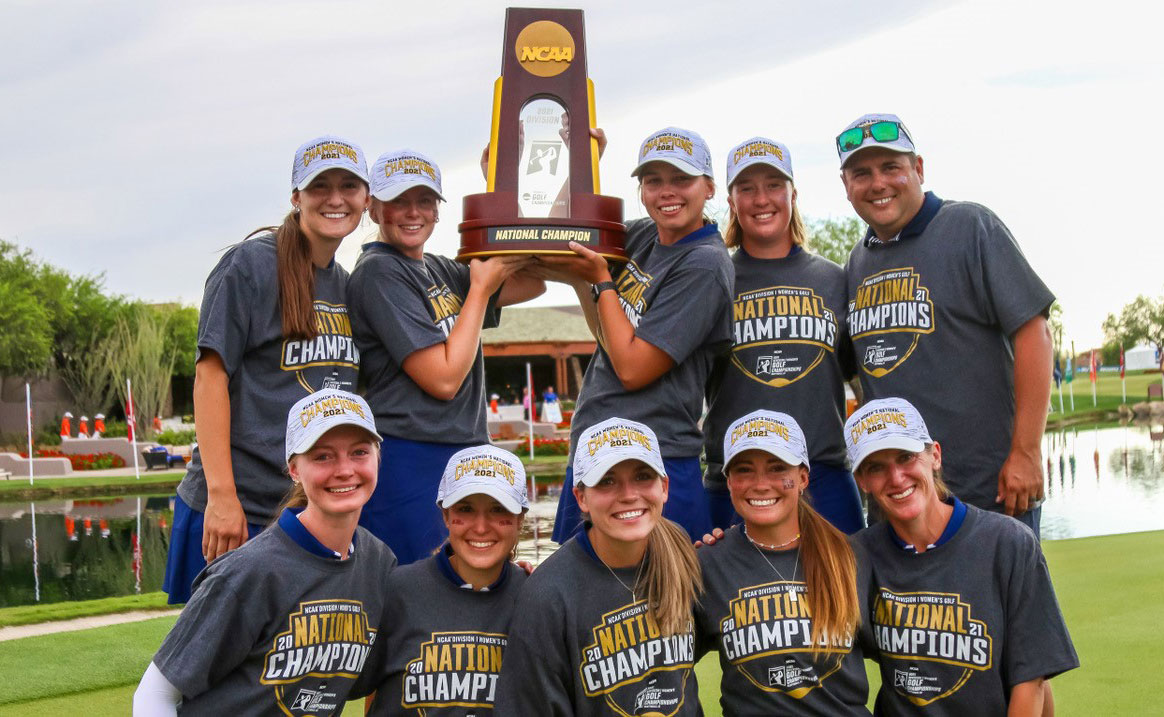 “After the course opened in 2019, I really saw our program take off,” said Kory Henkes, head women’s golf coach. “Since that time we’ve won eight golf tournaments — two of those being the SEC championship, which we won about three months after the facility opened, and the national championship this past year.”

Henkes is referring to the Tosh Family Short Course, a golf practice facility developed with a $1 million gift from retired real estate professor Dennis Tosh and his wife, Beth. The Oxford, Mississippi, couple has recently committed a second $1 million gift to the golf program, which will be used to renovate the teams’ headquarters by updating office spaces, upgrading locker rooms and adding player lounges.

“I know without a doubt that our wins would not have been possible without the Tosh Family Short Course,” said Henkes, who was named 2020-21 Division I National Coach of the Year by the Women’s Golf Coaches Association and the SEC Coach of the Year. “We spend 80% of our practice time on it.”

The facility boasts eight different greens with multiple elevation changes, two types of grass (Bermuda and zoysia), numerous deep pot bunkers, shallow bunkers, areas of rough, a sound system through which the student-athletes can play their music of choice, lights for night practices and more.

All of these features enable the student-athletes to work on their short game by replicating scenarios they may face in the heat of competition.

“The majority of the time we’re working on seven irons and under, so a lot of your scoring clubs — you know, the ones that help you make those birdies and pars,” Henkes said. “So we get to work on a lot of our short game, which is the most important part of our game.”

“Before we leave for a golf tournament, we have a general idea of what the length of the Par 3 is going to be and what it looks like — what shape the green is, what size, uphill, downhill, if it’s over a hazard or not — and we can replicate the shots our guys and girls will need to play,” Malloy said. “They’ve seen those shots a hundred times before they actually get to the tournament and play the course.”

It makes the student-athletes not only more competitive, but also more confident, the coaches said.

“For instance at the East Lake Cup, Julia Johnson had this really hard shot and I said, ‘Julia, that’s just like we practiced every day at the short course on our 6 green. You know you have to hit that high soft shot.’ So just putting them back in that situation takes a little bit of the pressure and stress off of them when they know they’ve already practiced it,” Henkes said.

“The more confident you are that you’ve worked on the shot and you know you can do it, the easier it will be to pull it off in a tournament versus just wishing and hoping that you know how to hit the shot.”

“I can’t speak for Dennis and Beth but I think it’s exciting for them to witness what a difference the short course has made,” Malloy said. “They’ve seen Braden Thornberry winning a national championship. They’ve seen our women’s team winning both national and SEC championships. Those are all tangible. Without their support and gifts, we wouldn’t be able to achieve those wins. And, I think the best is yet to come for both programs.”

Dennis Tosh was among the spectators at Grayhawk Golf Club in Scottsdale, Arizona, when the Rebels claimed their title — an experience he will never forget.

“It was a storybook finish in the way they played and the way they respect the game of golf,” he recalled. “They love each other. They cheer for each other. And I was fortunate enough to be able to stand by the 17th hole to see them close out the match with hugs and kisses and tears.

“It was super. It was unbelievable. It was one of those experiences when you just think, ‘I’m glad I’m here.’”

“It was truly incredible and the best part was having Dr. Tosh out there to celebrate with us because he’s just as big a part of this team. This wouldn’t be possible without him and his family and their generous support of the golf program,” she said.

“It’s truly special to have people like that who want to give back to the student athletes and make their college experience that much better. It was just the icing on the cake.”

Malloy agreed: “I think anyone who knows Dr. Tosh knows what a selfless guy he is. He and Beth, and the entire family for that matter, are really family of ours. We spend a lot of time together. His passion for Ole Miss and athletics programs — and especially Ole Miss Golf — is unrivaled really.”

An avid golfer himself, Tosh said he’s humbled by the coaches’ remarks.

“Both Chris and Kory are, first of all, wonderful people, wonderful coaches. I’m happy to call them both my friends as well as their assistants: Austin and Zack,” he said. “If this gift helps them in preparing, recruiting and being competitive, that just helps us feel better than we already feel.

“They were really in need of a practice facility, and God has blessed my family in many ways. To be able to share some of those blessings with the university was an easy decision for us to make.”

Tosh retired from the university in 2003 after he and three other business professors founded FNC Inc., a provider of real estate collateral information technology serving the nation’s largest lenders. FNC was sold to California-based Core Logic in 2015.