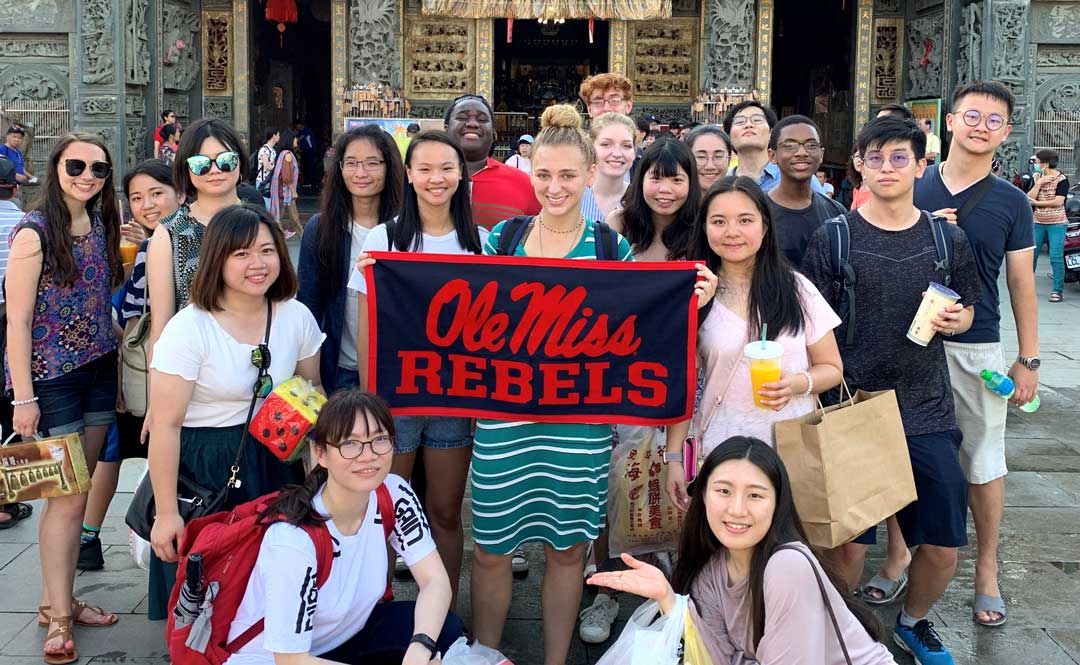 University of Mississippi students in the Chinese Language Flagship Program learn about the local culture, business community and language while studying in Taiwan. Thanks to a recent gift from American First National Bank, future study abroad trips to Taiwan will be more affordable for Ole Miss students.

The University of Mississippi and Taiwan are located on opposite sides of the globe, but a recent gift from American First National Bank is bringing the two closer together.

As a result of the Houston, Texas-headquartered bank’s $60,000 gift, UM students studying abroad in Taiwan will be able to afford a host of educational, cultural and professional opportunities.

The leaders of Asian-American owned American First National Bank, some of whom are UM alumni, are supporters of the university’s celebrated Chinese Language Flagship Program, and their recent generosity is designed to enhance the program and relationships between Ole Miss and Taiwan, said Wen-Lung Henry Wu, the bank’s chairman and an alumnus.

“Ole Miss is the leading university in Mississippi’s higher education system,” Wu said. “We are impressed by the goals of UM’s Chinese Language Flagship Program, which include creating global professionals who possess superior-level proficiency in Mandarin and have a deep understanding of the Chinese culture so they can work successfully with their Chinese counterparts here and around the world.”

The financial institution has established the American First National Bank-UM Chinese Language Flagship Taiwan Program Fund in the Department of Modern Languages in the College of Liberal Arts.

“We are enormously grateful for this incredible financial support from American First National Bank,” Yang said. “These funds will provide invaluable assistance to our students who are required to study abroad. The costs associated with studying abroad can be a burden to some of our students and their families, and this gift will help ease that strain.

“Being able to study abroad in Taiwan is a unique, life-changing opportunity. It gives our students an educational experience that allows them to learn so much more about the culture and the language than they are able to learn from a textbook or in a classroom,” the professor said.

The idea to launch this scholarship fund to support the teaching of the Mandarin language at Ole Miss was brought to the bank by Robert Lo, director general of the Taipei Economic and Cultural Office in Houston, and Andrea S.Y. Yang, director of the Education Division of the Taipei Economic and Cultural Office’s Education Division, Wu said.

The proposal was immediately embraced by the bank, which, in addition to Wu, has several engaged UM alumni, including two of its directors, Ray Chang and Paul Cheng.

American First National Bank predicts the fund will pave the way for Ole Miss student and alumni to develop relationships between Taiwan and Mississippi by creating a “friendly business and educational environment,” Wu said.

“We think this fund will help attract more students to join the Chinese Language Flagship Program and provide students with the opportunity to study in Taiwan where they can enroll in Chinese language courses and study the Chinese culture,” Wu said. “I appreciated the opportunity to attend Ole Miss with the scholarship provided to me in 1972 so that I could come to this great country to pursue my dream.”

Providing UM students with such opportunities is essential for them to succeed in the program and gain real-world experience that will benefit them after they graduate, said Jesse Paxton, an Ole Miss student from Springfield, Missouri, majoring in Chinese and international studies who has been in the program for four years.

Paxton, who has already studied abroad in Taiwan, plans to pursue a linguistics-focused career in the federal government when he graduates in May 2022.

“While in Taiwan, I completed classes at the National Taiwan University that were taught in Chinese and focused on international relations and the history of Taiwan,” he said. “I also accepted an internship in Chinese with the Hu Fu Center for East Asian Democratic Studies and traveled to different parts of Taiwan.

“Being immersed in these languages and cultures is an experience that can’t be replicated by participating in a traditional academic program in the United States,” Paxton said.

Because he has studied abroad in Taiwan and other East Asian countries, Paxton is sharing his experiences and the challenges he encountered with younger cohorts this summer so they will be able to make the most of their time when they are studying in Taiwan thanks, in part, to the support being provided by American First National Bank.

The UM Department of Modern Languages is also home to an Arabic Flagship Language Program, which with the Chinese Flagship program, are two of only a few such federally funded critical language programs in the country. The programs train students to be “global professionals of the 21st century” who command American Council on the Teaching of Foreign Languages superior proficiencies in the specific languages.

Individuals and organizations can make gifts to the American First National Bank-UM Chinese Language Flagship Taiwan Program Fund by sending a check with the fund’s name written on the memo line, to the University of Mississippi Foundation, 406 University Ave., Oxford, MS 38655; or online at https://give.olemiss.edu.

For more information about supporting the College of Liberal Arts, contact Rob Jolly, managing director of development, at jolly@olemiss.edu or 662-915-3085.