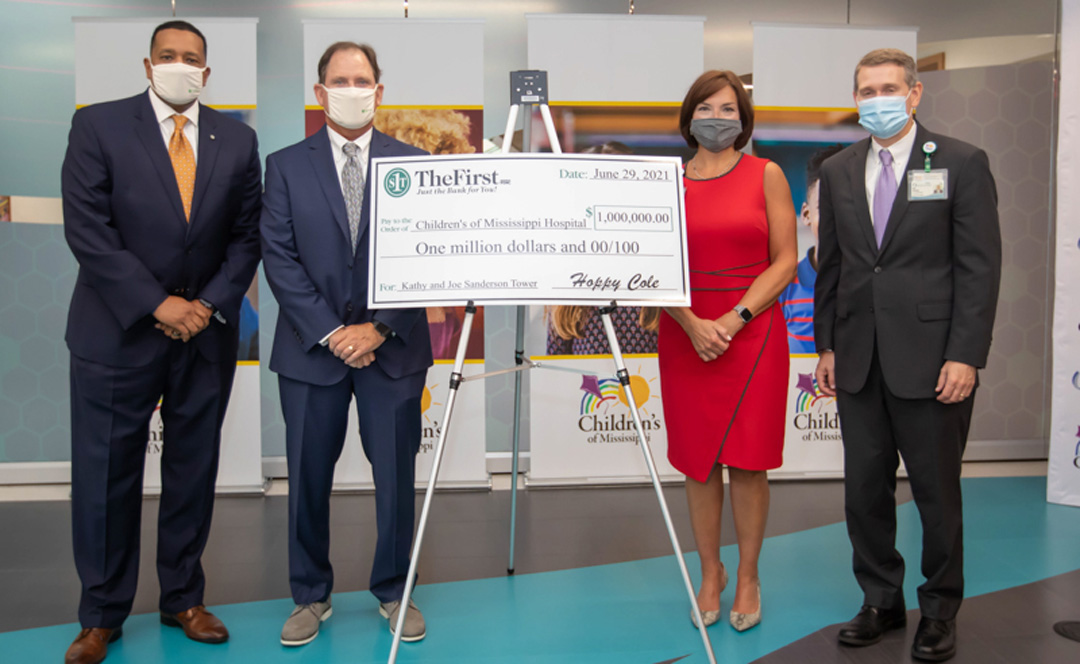 The expansion of the state’s only children’s hospital is getting a $1 million boost from TheFirst, A National Banking Association.

“Our company is thrilled to participate in and be a part of the campaign to grow and strengthen Children’s of Mississippi,” said M. Ray “Hoppy” Cole, president and CEO of TheFirst. “Our company is proud to support Kathy and Joe Sanderson‘s vision to further medical research and care specifically for the children of our state.”

Dr. Mary Taylor, Suzan B. Thames Chair, professor and chair of pediatrics, said gifts such as this are critical to advancing pediatric care for the state’s children.

“The Kathy and Joe Sanderson Tower, together with the Blair E. Batson Tower, is a resource for children and families throughout the state,” Taylor said. “We are already seeing the benefits of having this state-of-the-art facility to match the skills of our medical team, and those benefits will only grow as we continue to serve patients in the Kathy and Joe Sanderson Tower.”

The children of this state, Taylor said, “deserve to have the highest level of care close to home.”

Children’s of Mississippi, the pediatric arm of the University of Mississippi Medical Center, includes the children’s hospital on the UMMC campus as well as specialty clinics in Jackson, Tupelo, Biloxi, Hattiesburg and Meridian.

“We’re a hospital for the entire state,” she said.

The Sanderson Tower opened for patient care Nov. 2, 2020, more than doubling the square footage devoted to pediatric care at UMMC.

Inside the seven-story tower, two floors of neonatal intensive care rooms give the smallest and most critically ill babies in the state space to heal and grow. The rooms are large enough to allow parents to stay alongside their babies.

The Sanderson Tower also includes a dozen larger surgical suites as well as an imaging center designed for children, complete with a CT scanner that looks like a sandcastle and MRI machines that look like a lighthouse and a ship.

Children’s of Mississippi patients go to follow-up visits at clinics designed for collaboration among pediatric specialties and convenience for families.

Guy Giesecke, CEO of Children’s of Mississippi, said parents are finding the new Sanderson Tower to be convenient and family friendly.

“The construction of this tower was made possible because of donations to the Campaign for Children’s of Mississippi,” he said. “We’re getting closer to the campaign’s $100 million goal, so this gift couldn’t have come at a better time. We extend our heartfelt thanks to TheFirst for this incredible commitment to our state’s children and families.”

The Campaign for Children’s of Mississippi was launched by Sanderson Farms CEO and board chairman Joe Sanderson and his wife, Kathy, in 2016 as a philanthropic drive to help fund the children’s hospital’s $180 million expansion.

The Sandersons started the drive with a $10 million personal donation.

Joe Sanderson thanked TheFirst for helping the Campaign reach more than 88 percent of its goal.

“Providing the care children need close to home is good business,” Sanderson said. “Employers want the children of their workers to get the care they need in Mississippi instead of leaving the state. We are grateful that TheFirst values the health of Mississippi’s children enough to make such a generous investment in the state’s future.”