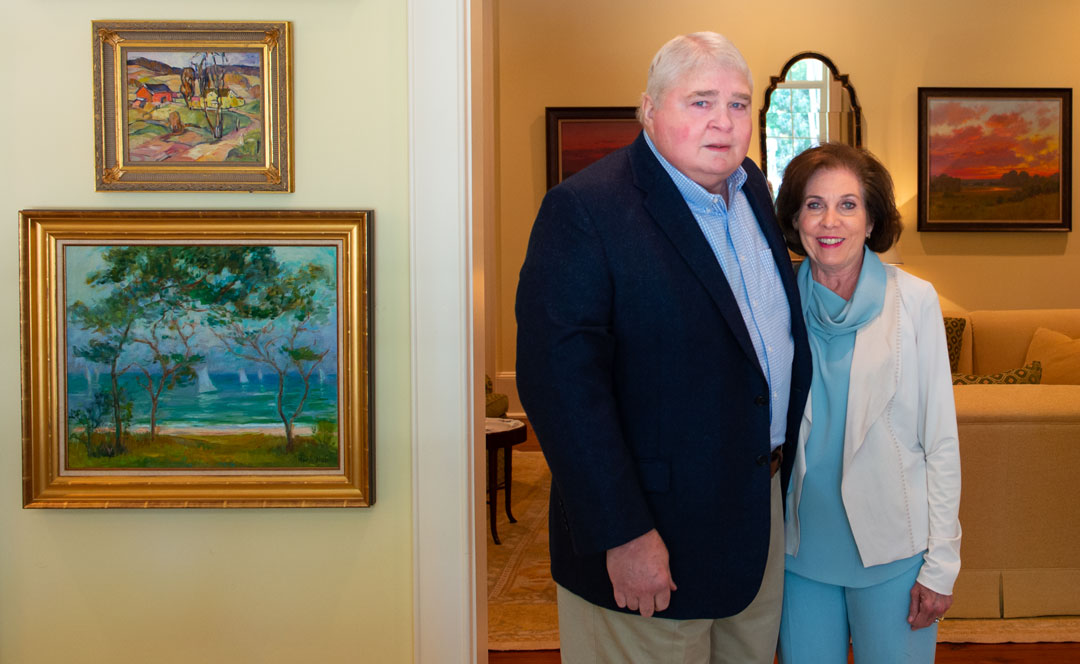 Marty and Bill May place great value on faith, family and football — in that order.

The Ridgeland, Mississippi, couple serve in their church, First Presbyterian Church of Jackson, Mississippi, where Bill May is an elder emeritus. He shares the gospel every time the Spirit nudges — on planes, on beaches and in prisons.

Walls in their home are lined with dozens of portraits of their daughters, both now married, and the Mays feel blessed to have two grandchildren who visit almost every day.

And they rarely miss a football game at their beloved University of Mississippi, from which they both graduated and where Bill May was himself a Rebel defensive tackle from 1969 to 1973. Most recently their love of the sport manifested in the form of a gift to Ole Miss Athletics that will name Gate 1 at Vaught-Hemingway Stadium in their honor.

“We love going to the games,” said Bill May, a native of Fulton, Mississippi. “I think the Rebels have had a lean year. So we wanted to do a small part to try to help the football team out and get them back on the winning track.”

The best SEC football programs strongly recruited May out of Itawamba Agricultural High School. He chose Ole Miss because of its proximity to Fulton, enabling him to return home frequently to help his widowed mother care for his disabled younger brother — a responsibility he willingly carried throughout college and into adulthood.

Football pummeled May throughout his college career. He tore ligaments and missed most of his first season. More injuries and numerous surgeries kept him from playing most of his red-shirt and sophomore years.

“I pretty well gave my body to Ole Miss,” said May, who ended up having stellar junior and senior years as one of the Rebels’ most consistent defensive performers.

In an article written in 1973 by Earl Lee, the Rebels’ academic adviser, May said: “To me, playing football is being part of a team. I believe that the sport has allowed me to form closer friendships than I could ever have done otherwise. It’s this feeling of closeness that makes a person go on playing in spite of the pain. You know that other people depend on you, and you depend on them.”

He hopes today’s football players will likewise experience such camaraderie.

In 1973, May earned a bachelor’s degree in public administration from the university, majoring in law enforcement. After graduating, he joined the Federal Bureau of Investigation in Quantico, Virginia, for three years before returning home. He earned a law degree from Mississippi College, went into practice with his mother, served as a Mississippi state senator and enjoyed a lengthy career as an investor.

Marty May says Bill is an answered prayer. Neither knew each other in school. They met in Jackson, appropriately enough, at church.

“When I was in high school, I started praying that I would marry an Ole Miss football player. That was not the only thing I prayed for – I was looking for a Christian and other traits – but I did pray that prayer.”

She has loved Rebel football since elementary school when she began attending games at Memorial Stadium in Jackson with her father, Zach Hederman, publisher of the Ole Miss football programs and chair of the stadium commission.

“I would go up to that stadium, climb all the steps to the top and turn on all the lights,” Marty May recalled. “I just got hooked at eight or nine years old on everything about football.

“Daddy would bring home a copy of the program and I would get so excited to start studying it; I had all the Ole Miss players’ numbers memorized. That excitement for the sport never left me.”

Her husband agreed: “She thinks she has to be the first one in the stadium and remain there until they turn out the lights.”

Marty May earned a liberal arts degree in 1975, majoring in journalism, and returned home to Jackson, where she worked as a writer for several area publications. At Ole Miss, she was a member of Kappa Delta sorority and now enjoys serving on the Ole Miss Alumni Association board of directors.

“I just always knew that Ole Miss was where I wanted to go to school,” she said. “And I ended up marrying a fellow Ole Miss alum. I’m grateful for Bill because we share the same interests.”

In addition to watching the Ole Miss Rebels play football, the Mays enjoy spending time with their daughters’ families and traveling. Bill May is also an avid collector of guns and unique knives, many of which are framed and displayed in his office along with his treasured Rebel memorabilia.

“It has been a pleasure getting to know Bill and Marty. I have visited them at their beautiful home in Ridgeland, where we had some great conversations about Bill’s days playing for one of our historic teams,” said Keith Carter, vice chancellor for Intercollegiate Athletics.

“I am very grateful not only for their generous gift as it will significantly strengthen our football program, but also for their deep interest in our players and their success both on and off the field.”