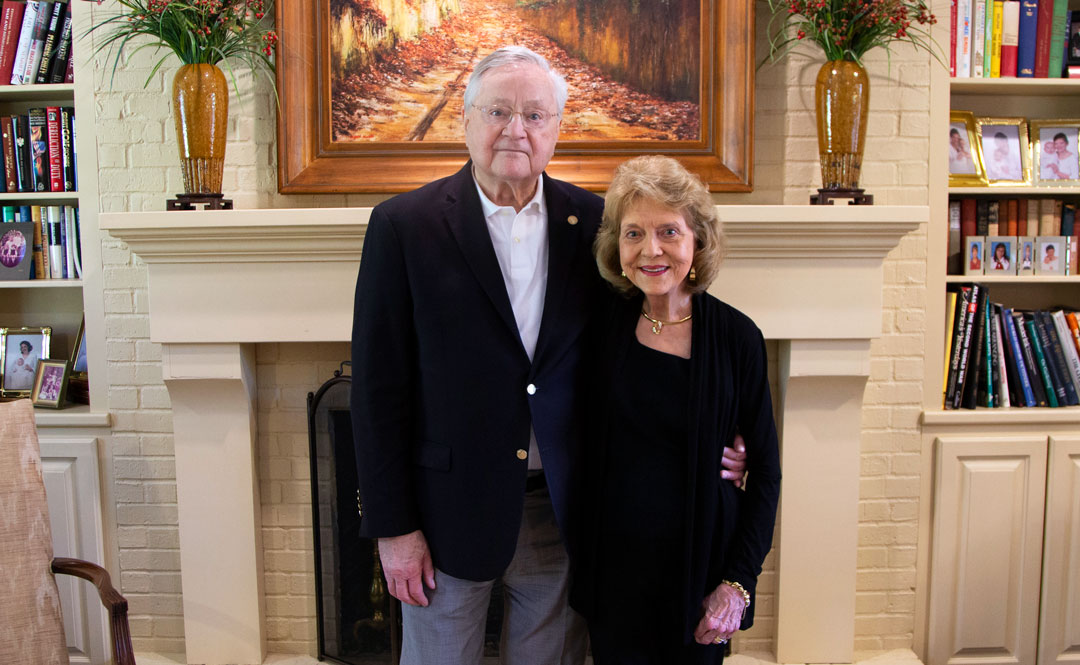 Sandy (right) and Robert Jackson have established a scholarship endowment within the Patterson School of Accountancy.

For Robert T. Jackson, Sr. and his family, earning a diploma from the University of Mississippi is almost like tailgating in the Grove on a football Saturday.

It’s something of an Ole Miss tradition.

Jackson and his wife, Sandy, both of Hattiesburg, Mississippi, and their four grown children have been awarded a total of nine degrees from the university, three with accounting majors.

While the red and the blue of Ole Miss has run deep in the Jackson family for decades, Sandy and Robert Jackson recently took steps to ensure future generations of Patterson School of Accountancy students are given opportunities to earn degrees from their alma mater.

The couple established the Robert T. Jackson, Sr. and Sandy Jackson Accountancy Scholarship Endowment at UM in 2014, and they now have made a testamentary gift of Robert Jackson’s life insurance policy that will add $100,000 to the scholarship designed for full-time accountancy students.

The Jacksons know well the current costs of attendance.

“We have five grandchildren who have recently graduated from Ole Miss, and two granddaughters enrolled there now,” said Jackson, who collected his first diploma at UM in 1964. “We have two grandchildren enrolled for this fall and both are already accepted in the Sally McDonnell Barksdale Honors College.

“Out of my 15 grandchildren, I expect most of them to go to Ole Miss for their undergraduate degrees.”

And Robert Jackson’s dad also attended the university “a very long time ago,” he added.

“We greatly appreciate Robert and Sandy’s continued generous support of both the university and the Patterson School,” said Mark Wilder, dean of the school. “Their scholarship is used to recruit and retain outstanding accountancy majors and provides much-needed financial support for Patterson School students.

“We are grateful for Robert, Sandy and the Jackson family and are very proud to have their legacy represented through current and future generations of Ole Miss accountancy students.”

“The Jacksons’ generosity is what the School of Accountancy needs to attract the best and brightest scholars,” said James W. Davis, professor emeritus of accountancy.

Davis holds the distinguished Peery Chair in Accountancy, a position named in honor of Harry Eugene Peery — the “very best teacher I ever had in my life,” Jackson said.

“Robert Sr. comes out of the Gene Peery era of the university,” Davis said. “I’ve known Robert for half a century and I have the greatest respect for him and all his family.”

Over the years, Robert and Sandy have given more than a quarter of a million dollars to the university. These funds have been designated to the Patterson School and a variety of other UM schools and areas in need of financial support.

Consequently, they’ve generously supported the School of Law, Athletics, the Ole Miss Fund and the Alumni Association, and they sponsor a room at The Inn at Ole Miss.

The couple have known one another for most of their lives. They both grew up in Hattiesburg and, as Jackson pointed out, since they were born just six days apart, they were in the new-born nursery together at the old Methodist Hospital in Hattiesburg.

They went to Ole Miss together and attended commencement as a couple in May 1964.

After Jackson obtained his law degree, he went to work for a firm in Gulfport, Mississippi. The Jacksons moved back to their hometown of Hattiesburg a couple of years later and have remained there since.

“I absolutely loved my undergraduate years, majoring in accounting – and my law school experience was wonderful as well,” Jackson said. “I fully intend to continue supporting both.

“I’m interested in seeing both schools succeed and have enormous endowments so they will continue attracting exceptional students to their programs and offer assistance to those high-quality students who need support.”

To make a gift to the Robert T. Jackson, Sr. and Sandy Jackson Accountancy Scholarship Endowment, send a check with the scholarship name written in the memo line, to the University of Mississippi Foundation, 406 University Ave., Oxford, MS 38655; or online at https://give.olemiss.edu.

For more information about supporting the Patterson School of Accountancy, contact Jason McCormick, development director, at jason@olemiss.edu or 662-915-1757.