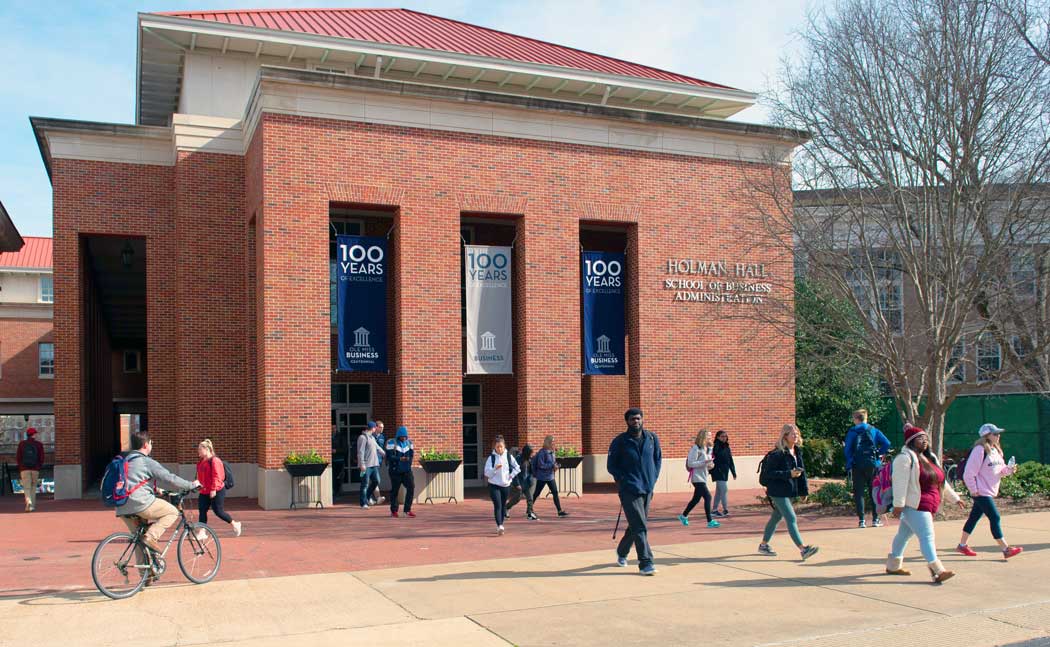 Holman Hall is home to the University of Mississippi School of Business Administration.

In addition to financial support, the Lyttleton T. Harris IV Endowed Scholarship at the University of Mississippi is giving its recipient mentoring from a marketing master.

In February 2021, Lyt Harris of Houston, Texas, added $100,000 to the scholarship endowment he established in 2016. In addition to this and previous gifts to his endowment, Harris made an estimated $2.5 million planned gift in 2019 to support the scholarship after his lifetime.

“I am very grateful to be the recipient of this scholarship. Not only have I been given the financial opportunity to focus solely on my school work, it also gave me the opportunity to connect and get advice from Mr. Harris,” said Anna Pratt of St. Louis, Missouri, a junior sales and marketing major with a minor in management information systems.

When Harris established the scholarship, the 1962 graduate of the UM School of Business Administration said he hoped to meet his recipients. With Pratt, his wish came true … sort of. Due to the threat of COVID-19, the meeting was virtual.

“I greatly enjoyed getting to know Anna. I could see a lot of myself in her — especially in the way she’s driven to succeed,” Harris said. “And I believe she will be very successful in her chosen profession.”

On the recent Zoom call, Harris told Pratt he admired her work ethic, shared some of his own experiences and offered career-path advice.

“Mr. Harris motivated me to set larger goals. His words have also increased my confidence in what my future is capable of being,” said Pratt who hopes to work in marketing for a company focused on consumer behavior or advertising.

Years ago, after spotting the potential for great success in a small-town popcorn grower, Harris’ own marketing efforts helped make Orville Redenbacher a national sensation.

Today, recognizing the same potential in business students, Harris of Houston, Texas, has established endowments at Ole Miss and three other universities that he trusts will help prepare his scholarship recipients achieve success.

Angela Brown, senior director of development for the School of Business Administration, said she is already beginning to witness Pratt’s achievements.

“Anna is eager to apply herself and gain experience in her career field of interest prior to graduation,” she said.

During the virtual call that Brown arranged between Harris and his scholar, Pratt expressed interest in securing a summer internship using her marketing and communication skills and talents.

“Following our conversation, I introduced Anna to the Business Schools Career Preparation team, the Development office internship coordinator and the Marketing Department chair, Dr. Barry Babin, who all connected her with available opportunities,” Brown said. “I have enjoyed being a point of contact and resource for her. She is part of our Ole Miss family.”

After completing graduate school at Louisiana State University in 1963, Harris rose through the ranks of Scott Paper Co. where he became project manager for the first disposable diapers, which he took from test market to national distribution. Later, he joined a large division of Hunt Wesson Foods as director of marketing.

On a business trip to Chicago, Illinois, Harris and his colleagues visited Marshall Fields department store where they spotted a Mason jar of popcorn labeled “with a picture of a funny little man with a bowtie,” he said, adding that a manager told them the product was a bestseller in the store. Intrigued, Harris conducted an extensive laboratory test at Hunt Wesson and found the product to be all that Redenbacher claimed and more.

“So we went and contacted Orville in person and said, ‘You’ve come up with this strain of corn that everybody likes and we’re marketing experts. If we get together, we can do some great things and probably make you the Col. Sanders of the popcorn business.’ That’s exactly what we ended up doing,” Harris recalls.

Today, Orville Redenbacher’s popcorn is the nation’s No. 1-selling brand. “If he’d never met us and we’d never met him, it probably would have never happened. He wasn’t a marketing person at all. He was just having fun with it and didn’t realize its potential.”

After Hunt Wesson, Harris worked several years as a senior executive in the banking and finance industry before moving to Houston in 1982 to become president and eventually CEO of Southwest Management and Marketing Co. There, he met his wife in 1984 at an art exhibition; both were avid collectors.

Harris sold his company and retired in 2004. He now serves as managing partner of the Harris Investment Partnership, specializing in venture capital investments including specialty foods, residential real estate, drug and alcohol rehabilitation centers and other projects.

Always active in civic and charitable activities, Harris has served on the boards of a number of nonprofit organizations, including The Kidney Foundation, Junior Achievement, Boy Scouts of America, Big Brothers/Big Sisters and St. Luke’s United Methodist Church. During his business career he was listed in Who’s Who in America, Who’s Who in Finance and Industry and Who’s Who in the South and Southwest.

He has served as a mentor for MBA students at the Ole Miss business school and was named an Otho Smith Fellow in 2008. He is also a mentor for middle and high school students in the Spring Branch Independent School District in Houston.

“Lyt’s generous gifts encompass the scope of work we do here by meeting the financial needs of students who want to pursue an education in business,” said Business Dean Ken Cyree. “We are very grateful for his time and long-term commitment and for our many loyal donors like him who offer crucial private support to the university and specifically the School of Business Administration.”

The Lyttleton T. Harris IV Endowed Scholarship is open to gifts from individuals and organizations. To contribute, send checks with the endowment name noted in the memo line to the University of Mississippi Foundation, 406 University Ave., University, MS 38655; visit give.olemiss.edu or contact Angela Brown, senior director of development, at browna@olemiss.edu or 662-915-3181.