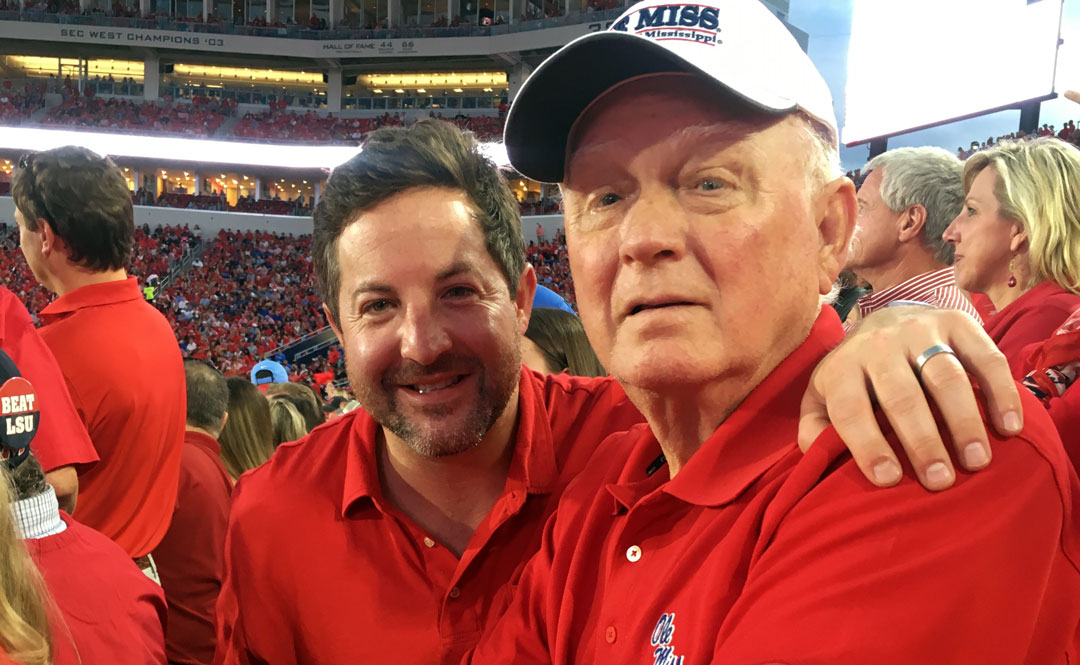 Former Rebel basketball player Ray Waddell of Dallas, Texas, has made a gift to the University of Mississippi that honors his late father by naming a mezzanine in The Pavilion at Ole Miss, the teams’ state-of-the-art arena.

Rayburn Waddell of Madison, Mississippi, passed away in August 2020.

“I enjoy giving back to the community and chose to support the Vaught Society in honor of my father because he was a big Rebel fan,” said Waddell, a native of Philadelphia, Mississippi, who grew up attending Ole Miss games with his dad.

In college, watching basketball from the stands was too far away from the action, so Waddell was asked to walk on, joining the team under then-Head Coach Rod Barnes in 2000.

“The tough training and practices helped build character, and I formed some lifelong friendships,” said Waddell, founder and CEO of CEC Companies, a specialty contracting and engineering company in the mechanical, electrical, plumbing and technology space.

“It’s so encouraging to see one of our former players give back to our program, and I greatly admire Ray for wanting his gift to be unrestricted, meaning it can be used to support any of our initiatives that are designed to help our student-athletes succeed in college and beyond,” Carter said.

Waddell himself is an example of a player who found a measure of success. After graduating in 2001 with a bachelor’s degree from the College of Liberal Arts, he worked for Cellular South and T-Mobile before joining W.G Yates & Sons Construction, where he built a rewarding career as director of business development.

Then, with a passion to run his own company, he started CEC Electrical Inc. in 2009. In a few short years, CEC became one of the largest subcontractors in the country with over 800 employees and $200 million in annual revenues.

“Success is a subjective term. It means a lot of different things to certain people. For me, it’s having a sustainable business that lives by its core values and provides a great working environment for our employees,” said Waddell, adding that he also credits his success to perseverance and a supportive family.

He met his wife, Angelique, on the Oxford campus in 1999. She graduated with a bachelor’s degree in business administration from UM in 2003 and a law degree from Tulane Law School in 2006; the couple was married in 2008. They have three children: Charlie, 9; Madeleine, 7; and Mary Lehmann, 3.

Waddell, who now plays golf more than basketball, has a favorite memory from his Rebel days—the time he hit a three-point shot at the buzzer in Rupp Arena (the University of Kentucky’s famed basketball arena).

Another fond memory came only a few years ago.

“I had my wife, kids, Mom, Dad and my in-laws in the Grove for a football game day and I was able to take them all over to the Gibbs Letterwinner Walk and show them my name on the M-Club wall,” he remembered. “That was really a cool thing to be able to do with my family and especially with my dad.”

Waddell is a board member of the ACE Mentor Program and president and board member of The Heartland Group Captive Insurance Group; he was named Most Admired CEO in 2018 by the Dallas Business Journal.

The late Rayburn Waddell was a native and longtime resident of Neshoba County, Mississippi. He graduated from Philadelphia High School and East Central Junior College, where he played and excelled in basketball. He then played at East Central Junior College under the late Denver Brackeen. While an Ole Miss Rebel in 1955, Brackeen topped the SEC in scoring, earning second team All-America and unanimous All-SEC honors.

“Dad told me he would always pass the ball to Van because he knew Van would pass it back for him to shoot a basket,” Waddell said.

Ray Waddell said he’s looking forward to returning to campus one day to watch basketball from the mezzanine named for his dad.