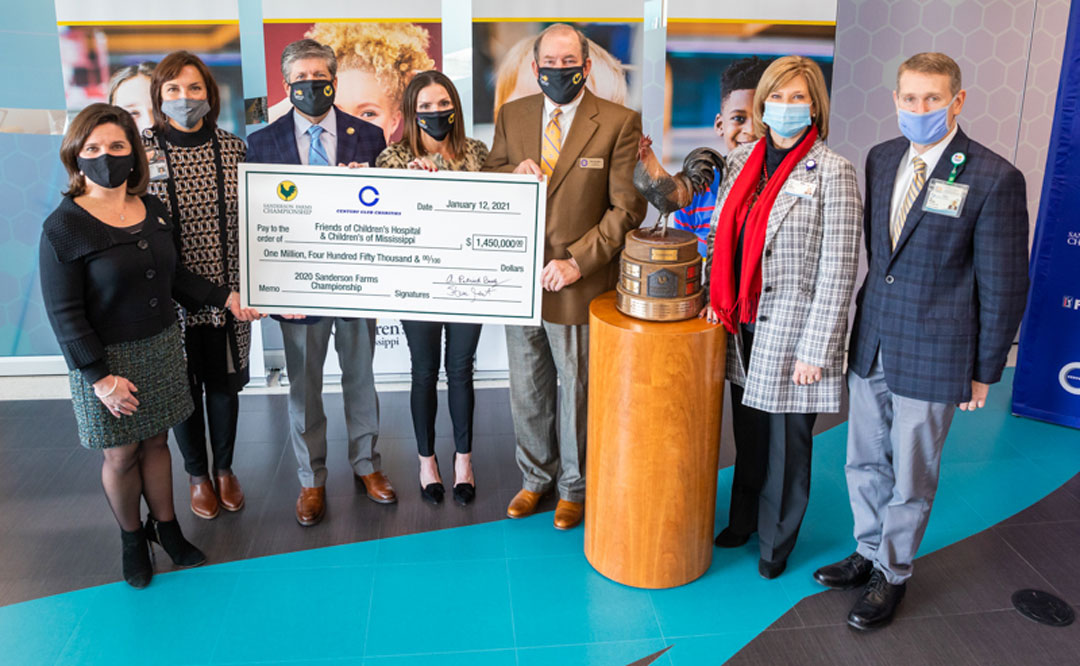 Not even a pandemic could stop Sanderson Farms Championship host Century Club Charities from making another record-breaking gift to benefit pediatric care at the University of Mississippi Medical Center.

Century Club Charities announced a $1.45 million gift to Friends of Children’s Hospital from funds raised through the 2020 tournament, which was held without spectators in October.

Joe Sanderson, CEO and board chairman of Sanderson Farms, and his wife, Kathy, launched the campaign in 2016 with a $10 million personal donation. More than $85 million has been raised so far.

Hilary Burroughs, director of marketing for Sanderson Farms, recalled how, in winter of 2020, she and tournament executive director Steve Jent questioned whether COVID-19 would affect whether the tournament could be held.

“We had talked about that a few times (in winter 2020),” she said, “and then we had the spring break that never ended.”

As 2020 continued, PGA TOUR events began to be postponed, and whether the Sanderson Farms Championship could even be held was discussed.

After considering public safety first, the question “What does this mean for Friends of Children’s Hospital?” was asked soon after, Burroughs said.

Knowing the Sanderson Farms Championship had raised more than $7.6 million for the state’s only children’s hospital since 2013, when Sanderson Farms became title sponsor, “we were bound and determined to have this event, no matter what it would take,” Burroughs said.

After conversations among officials with Century Club Charities, Sanderson Farms and the PGA Tour, the tournament was green-lighted, but with no spectators and none of the parties at the Country Club of Jackson that usually come with tournament week.

“We had to be smart and keep people safe,” she said. “We got to have our event, and we made the best of it. We pressed forward and made it the best that it could be to support the children of Mississippi.”

What resulted was extraordinary, Burroughs said. Sponsors kept commitments even if their events couldn’t be held, and people from across the state purchased “All in for Children’s” facemasks to offset lost revenue from ticket sales.

Not just persevering but thriving in the middle of a pandemic shows the “unwavering commitment to the children of Mississippi” that’s at the heart of the Sanderson Farms Championship, said Dr. LouAnn Woodward, vice chancellor for health affairs and dean of the School of Medicine.

“Last year was a year that in so many ways we could have just written off,” she said. “It would have almost been expected. The fact that not only was the tournament not cancelled, but, in pandemic style, it was wildly successful speaks to the commitment of everyone involved.”

For the first time, the announcement of the annual presentation was made inside the Sanderson Tower. The significance of that was not lost on Melanie Morgan, board chair of Friends.

“At this very moment, there are children upstairs in this remarkable Kathy and Joe Sanderson Tower receiving life-saving treatment. That would never have been possible without the unwavering commitment that Century Club Charities has shown year after year in supporting Friends of Children’s Hospital in our quest to raise the dollars necessary to help make it happen,” she said. “Every business and individual who supports the Sanderson Farms Championship and Century Club Charities can be proud of the impact their investment has made for current and future generations of children to be cared for in this magnificent facility.”

As the announcement was being made in the Sanderson Tower’s community room, in other parts of the tower, patients were going into surgery or to outpatient specialty clinic check-ups, getting scans in MRI and CT machines designed to look like a ship and a sandcastle or recovering in intensive care.

“Since November, when we cut the ribbon on the Kathy and Joe Sanderson Tower, there have been thousands of patient encounters, patient interactions, clinic visits, surgeries, imaging studies and admissions, and that is just the beginning,” Woodward said.

Busby said the 2020 Sanderson Farms Championship “far exceeded our wildest dreams for what could be done for Mississippi charities.”

In addition to the $1.45 million raised for Friends through last year’s tournament, more than $250,000 was donated by Century Club to other charities around the state. Since becoming host organization for the state’s only PGA TOUR event in 1994, Century Club Charities has raised more than $19 million for Mississippi nonprofits.

“This tournament has really demonstrated the generosity and what I think is best in Mississippians, how we commit to something and stand strong,” Woodward said. “There was no blinking. They just proceeded on.”

Steve Jent, executive director of the tournament, said hopes are high that during the 2021 Sanderson Farms Championship, set for Sept. 27-Oct. 3 at the Country Club of Jackson, “we can get back to the fans and get back to the parties, and I promise you we will put on a phenomenal event.”