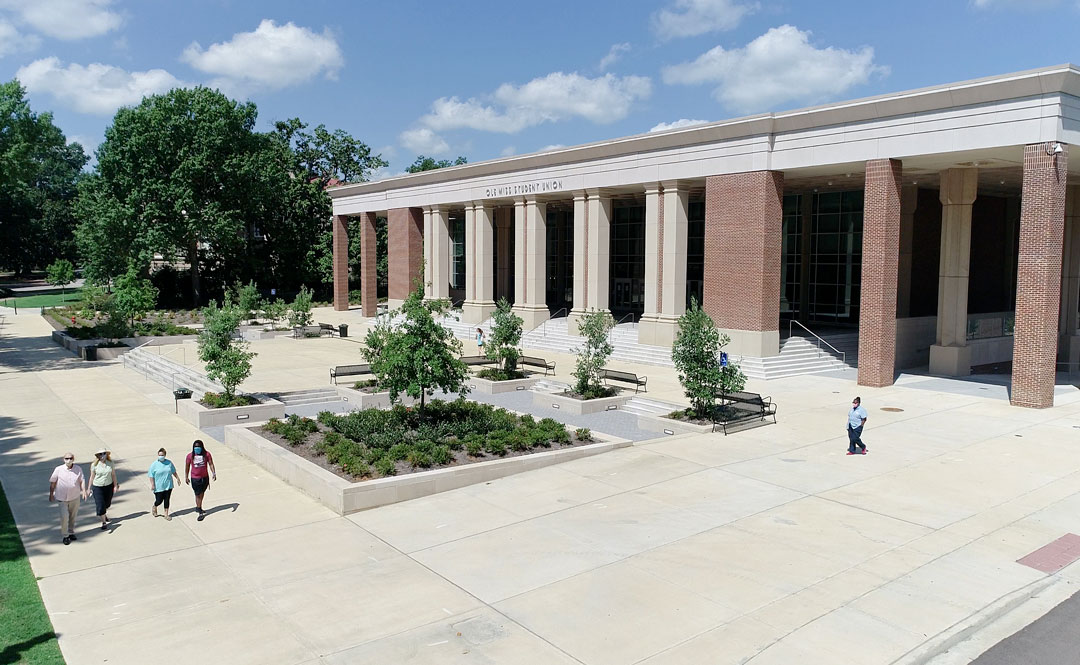 The far-reaching impact of the late philanthropist Gertrude Castellow Ford once again will be honored, this time with the naming of the Ole Miss Student Union that has almost doubled in size after completion of a construction project.

The Mississippi Institutions of Higher Education board voted unanimously Thursday (Oct. 15) to allow the University of Mississippi to rename the building as the Gertrude C. Ford Ole Miss Student Union. The foundation she created has contributed support totaling more than $64.5 million for the Oxford and UM Medical Center campuses.

Cheryle Sims, Ford Foundation chair, said she and other directors are pleased that the legacy of the late Gertrude C. Ford continues to expand.

“Mrs. Ford would be ecstatic if she knew her name would be on a building where students, faculty, alumni and others study, gather, collaborate and dine,” she said. “In normal times, the Student Union is the center of Ole Miss’ vibrant campus life, and the expansion and renovation project is absolutely stunning.

“The board and I are elated that our benefactor, Gertrude Castellow Ford, will be honored now and for years to come through a building that serves so many people and for so many purposes.”

Built in the mid-1970s, the Ole Miss Student Union experienced a major expansion and renovation project that began in 2015 and opened with the 2019 fall semester. More than 173,000 square feet were added to the facility, including an 8,000-square-foot ballroom. Larger lobbies and dining spaces, as well as increased conference meeting spaces were needed to better serve the student population with a more modern and engaging hub of student life.

Chancellor Glenn F. Boyce said the university is grateful for the longstanding relationship and philanthropic partnership with the Gertrude C. Ford Foundation.

“The impact of the Ford Foundation’s support is felt across all of our campuses, and it is wonderful to further honor and celebrate Gertrude C. Ford’s transformative passion for bettering our state.”

A celebratory event to commemorate the renaming will be scheduled later on campus.

Most recently, the Ford Foundation committed $25 million to the construction of a science, technology, engineering and mathematics facility, marking its longtime investments in both academic and cultural arts resources. Another $10 million was committed by the foundation to the Medical Center’s MIND Center to advance Alzheimer’s disease research, resulting in the MIND Research Center being named for Ford.

The new STEM facility will increase graduates in related fields; support growth in the state, regional and national economy; and strengthen the pipeline for training health professionals, engineers and science and math teachers. The walkway through the Science District, which will be used by thousands of students, alumni and friends, faculty and staff, will be named Gertrude C. Ford Way.

In addition to Sims, John C. Lewis and Gayle M. Papa serve as directors and officers of the foundation, which was created in 1991.

“The Ford Foundation directors continue to demonstrate a deep commitment to support the University of Mississippi, which, in turn, makes a powerful impact in Mississippi,” said Charlotte Parks, vice chancellor for development. “The opportunities we can offer our students because of them makes a dramatic difference in the Lafayette-Oxford-University community, the state and beyond.”

The Ford Foundation first initiated its longtime support of the university when it contributed $25 million for the 88,000-square-foot Gertrude C. Ford Center for the Performing Arts, opened in 2002. The Ford Center hosts enriching intellectual and cultural programming for all ages through the performing arts, public affairs and the humanities.

The foundation’s support of other university initiatives includes the Gertrude C. Ford Ballroom in The Inn at Ole Miss, the Daniel W. Jones, M.D. Chair for Faculty Support on the Oxford campus, the Suzan Thames Chair of Pediatrics on the Medical Center campus and essential land for Gertrude C. Ford Boulevard, providing the first new north-south thoroughfare on campus for the ever-growing Oxford-University community.

Descended from a long line of humanitarians, Gertrude Ford was known for her philanthropic spirit. In 1991, she established the Gertrude C. Ford Foundation in Jackson. It wasn’t until after her death, in 1998, that the Ford Foundation directors awarded Ole Miss a multimillion-dollar gift to design and build the performing arts center.

Throughout her life, Mrs. Ford was an ardent supporter of the arts. She played flute, violin and piano, and spoke French, Latin and Spanish. She also enjoyed the study of literature, particularly Shakespeare.

Ford died in September 1996. She and her husband, Aaron Land Ford, an Ackerman attorney and U.S. congressman, are buried in Cuthbert, a small town in southwest Georgia.

To make a gift to the University of Mississippi, visit give.olemiss.edu or contact Charlotte Parks, vice chancellor for development, at cpparks@olemiss.edu or 662-915-3120.