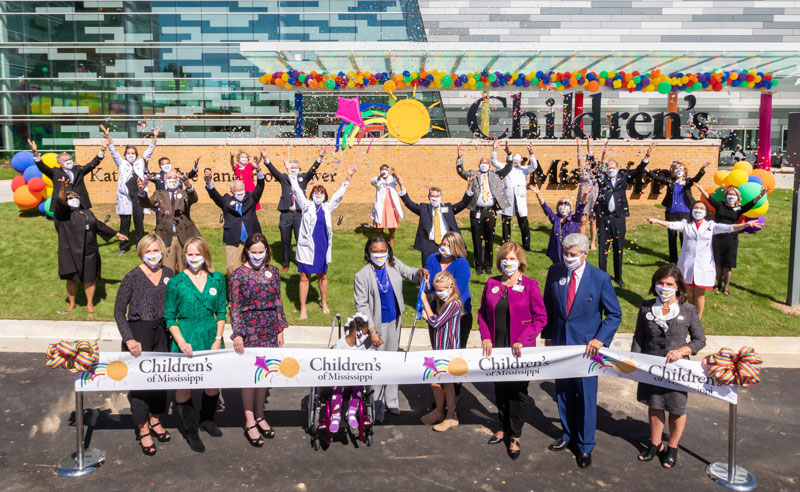 Cutting the ribbon on the Kathy and Joe Sanderson Tower at Children's of Mississippi are, from left, the Sandersons’ daughters Julie Richard, Emily Whitaker and Katie Creath; patient Miracle Brown and her grandmother Aretha Edwards; state Children's Miracle Network Hospitals Champion Sybil Cumberland and her mother Tara Cumberland; Dr. LouAnn Woodward, vice chancellor for health affairs and dean of the School of Medicine; former Gov. Phil Bryant; and Melanie Morgan, board chair of Friends of Children's Hospital. Behind them stand leaders in medicine and government.

The snip of a ribbon adorned with the colorful Children’s of Mississippi logo signaled the beginning of a new era of pediatric care in the state.

The ribbon-cutting ceremony on Oct. 14, 2020, with limited in-person attendance and livestreamed on Facebook, celebrated the completion of the Kathy and Joe Sanderson Tower at Children’s of Mississippi at the University of Mississippi Medical Center.

The expansion complements the Blair E. Batson Tower at Children’s of Mississippi to form the state’s only children’s hospital. Inside the new tower are a dozen surgical suites, 32 private pediatric intensive care rooms, 88 private neonatal intensive care rooms, an imaging center designed for children and an outpatient specialty clinic for follow-up care.

“This is about dreams and possibilities,” said Dr. LouAnn Woodward, vice chancellor for health affairs and dean of the School of Medicine. “Dreams are being realized, and possibilities have turned into bricks and mortar.”

The state’s only children’s hospital now has two towers, one named for a pioneer in pediatric medicine, Dr. Blair E. Batson, UMMC’s first pediatrics chair, and another, named for Kathy and Joe Sanderson.

Joe Sanderson is CEO and board chair of Sanderson Farms, the third largest poultry producer in America and the only Fortune 1000 company headquartered in Mississippi. Since 2013, the company has been title sponsor of the Sanderson Farms Championship, a PGA Tour event that has raised more than $7.7 million to benefit Children’s of Mississippi during that time.

Kathy and Joe Sanderson are chairing the Campaign for Children’s of Mississippi, the philanthropic drive to raise $100 million to help fund the expansion. The couple launched the effort in 2016 with a $10 million personal donation.

NFL great and UM alumnus Eli Manning and his wife Abby have served as honorary chairs of the campaign, donating more than $1 million and assisting in fundraising efforts since 2016.

Reeves’ predecessor, Gov. Phil Bryant, a long-time supporter of the state’s only children’s hospital, praised the Sandersons for their vision and philanthropy.

The Sandersons shared their vision via video.

“The opening of this new facility will mean that the highest level of care will be there for the children of our state and for children yet to be born,” Joe Sanderson said.

Kathy Sanderson added, “It’s thrilling to think that patients and their families will soon be coming through the doorway to the hospital to receive the care they need. Joe and I could not be more excited about this facility and couldn’t be any prouder of the medical team that will be there to treat the children.”

Dr. Anita Henderson, president-elect of the Mississippi Chapter of the American Academy of Pediatrics, a pediatrician at the Hattiesburg Clinic and a School of Medicine classmate at UMMC of Woodward and Taylor, sees the Sanderson Tower as a resource for children and families around the state, and also a key part of medical education at the Medical Center.

“The Sanderson Tower is here not only to treat our children, but to train the next generation of pediatricians and physicians,” she said. “Every medical student at UMMC will train in pediatrics here, and every pediatric resident will use that tower.”

Henderson said pediatricians from around the state can trust the specialty pediatric care that UMMC provides. “I trust Children’s of Mississippi for my patients,” she said.

Miracle Brown is one of the many children who have received that care. Born at 1 pound, 7 ounces, Miracle was airlifted from Delta Regional Medical Center in Greenville, Mississippi, to UMMC, where she spent the first 13 months of her life inside the neonatal intensive care unit.

“Miracle was born at only 23 weeks. The attending NICU doctor said that in all his years of practice, he had never seen a baby that tiny survive,” said her grandmother, Aretha Edwards. “Her life was saved. Here in the Sanderson Tower, babies like Miracle will have the best care in 88 private NICU rooms. We’re so grateful that families like ours will be able to have space to bond with their newborns. The new NICU floors will be where those babies and those families will get their best start.“

Miracle was present at the celebration, as was Sybil Cumberland, Mississippi’s 2020 Children’s Miracle Network Hospitals Champion and a patient of the Children’s Heart Center, which will have a new home inside the Sanderson Tower. Many other patients and families joined in virtually, sending cheers via the Children’s of Mississippi Facebook page.

Children’s of Mississippi CEO Guy Giesecke said patients like Miracle and Sybil, who also spent time in the NICU, will now be able to have their parents stay with them.

“This will be better for babies and better for families,” Giesecke said. “Throughout the Kathy and Joe Sanderson Tower, design and function are centered on our patients and their families.”

Melanie Morgan, board chair of Friends of Children’s Hospital, the nonprofit that raised the first funds for a children’s hospital at UMMC, said the expansion is a tribute to all who have supported the cause of pediatric health care over the decades. In 2016, Friends pledged $20 million toward the construction of the Sanderson Tower.

That goal, the largest pledge toward the expansion, was high, she said, “but we knew that we could do it, as long as we worked together. We worked with the fine friends and families, neighbors, providers, sponsors, businesses, everyone throughout Mississippi to support what needed to be done.”