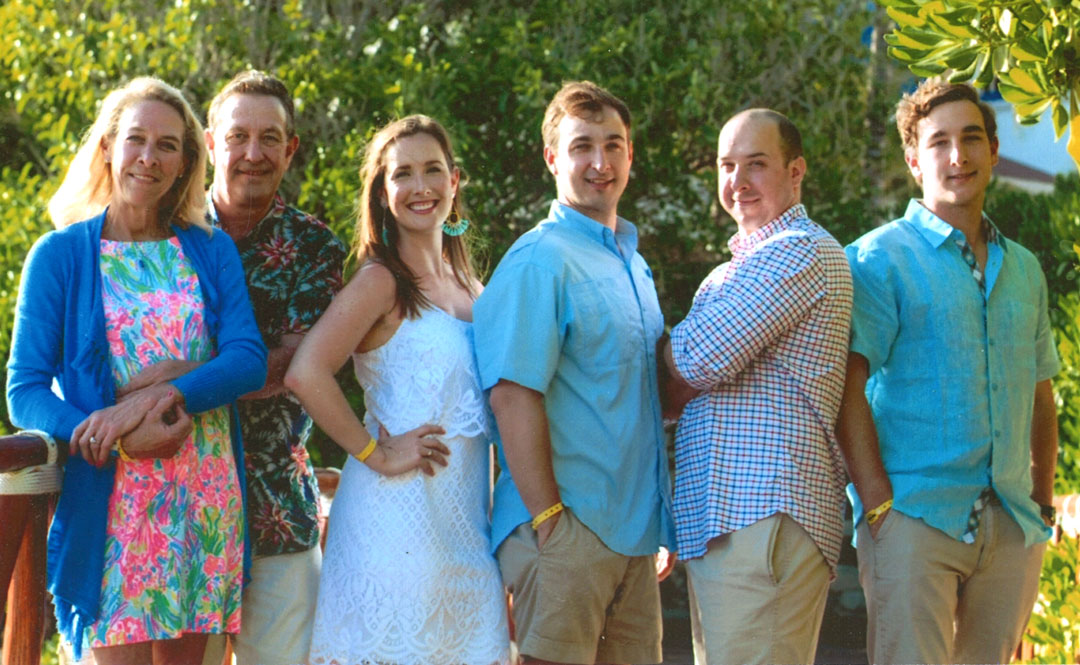 Shelley and Scott Ririe (from left) are pictured with their children: Elise, Mike, Andy and James.

A St. Louis, Missouri, couple’s gift to Ole Miss Athletics will benefit student-athletes while also honoring their sons, who are University of Mississippi alumni.

Scott and Shelley Ririe made a $250,000 gift to the Forward Together campaign for Ole Miss Athletics, which bolsters facilities and programs for student-athletes. In recognition, Gate 7 entrance of Vaught-Hemingway Stadium will be named the Ririe Family Gate.

“We love athletics and we especially love college football,” Scott Ririe said. “After our first son enrolled at Ole Miss in 2007, we fell in love with the Grove and all of the traditions. We donated to the athletics program to help perpetuate those positive traditions at Ole Miss.”

The Riries said they also hope their gift will enable the university to continue developing the brightest and best student-athletes possible.

“You have to have first-rate equipment and facilities to attract high-level talent in a very competitive Division 1 atmosphere,” said Scott Ririe, who was introduced to Ole Miss in 2005 when he visited the Oxford campus with his son, Mike – then a junior in high school. The two enjoyed a campus tour, a Rebel football game and festivities in the university’s historic Grove.

“We never visited another school after that day,” said Ririe, founder and co-president of Control Technology and Solutions (CTS), an energy service company based in St. Louis.

“We love families like the Riries, whose love for Ole Miss Athletics grew from their sons’ passion for and loyalty to their alma mater,” Carter said. “We are so grateful to Scott and Shelley, especially during these uncertain times, and hope their gift will inspire others to similarly support our students and programs.”

Mike Ririe graduated from Ole Miss in 2012 with a bachelor’s degree in business administration and is a commercial real estate agent in Chicago, Illinois. His brother, James, is a 2020 graduate of the School of Business Administration.

Inspired by the Ririe brothers’ love for their alma mater, Scott and Shelley made a $300,000 gift in 2018 to establish the Ririe Family Scholarship Endowment, which awards $6,000 a year for up to eight semesters to two St. Louis freshmen in the School of Business Administration.

Scott Ririe graduated from Cornell College in 1979 and Shelley is a 1981 graduate of the University of Iowa. Yet they now proudly support Ole Miss.

“Our family has become attached to Ole Miss through our boys and their love and loyalty to the university,” Shelley Ririe said.

The couple also has two other children: Andy, a paramedic studying to become a physician’s assistant, and Elise, who graduated from the University of Dayton (Ohio) and is a pharmaceutical sales representative living in Cleveland, Ohio.

Scott Ririe began his career working in sales for Honeywell International Inc. in Des Moines, Iowa. He became service sales manager in 1984 and moved to St. Louis, where he was soon promoted again to district general manager. In 2000, he and a business partner founded CTS, which has grown to become the CTS Group, operating in nine states with over 124 employees and revenue of more than $100 million a year.

He serves on the executive committee as treasurer for National Association of Energy Services Companies Board of Directors and the board of Midwest Easter Seals Association. He also has served on the advisory boards for General Motors and, along with his wife, Ranger Bass Boats.

His high school sweetheart and wife of 36 years, Shelley Ririe began her career with Revlon Inc., marketing cosmetics to retailers. She then joined Ormco, an orthodontic supplier. Today, she owns Branson West Marine and Powersports.

The Riries’ most recent gift is part of the Ole Miss Athletics Foundation’s drive to honor donors with naming opportunities for each entrance gate at Vaught-Hemingway Stadium.

“The gate naming initiative will play an integral role in completing the $200 million Forward Together campaign,” said Fowler Staines, chief executive officer of the Ole Miss Athletics Foundation. “With $186 million raised toward a multitude of capital projects, the final phase of the campaign saw the opening of the William F. Galtney Indoor Tennis Center and completed renovations to the Tosh Family Short Course and Oxford-University Stadium.”

For more information about the Forward Together campaign or the gate naming initiative, visit http://givetoathletics.com or contact Fowler Staines, chief executive officer of the Ole Miss Athletics Foundation, at fowler@olemiss.edu.