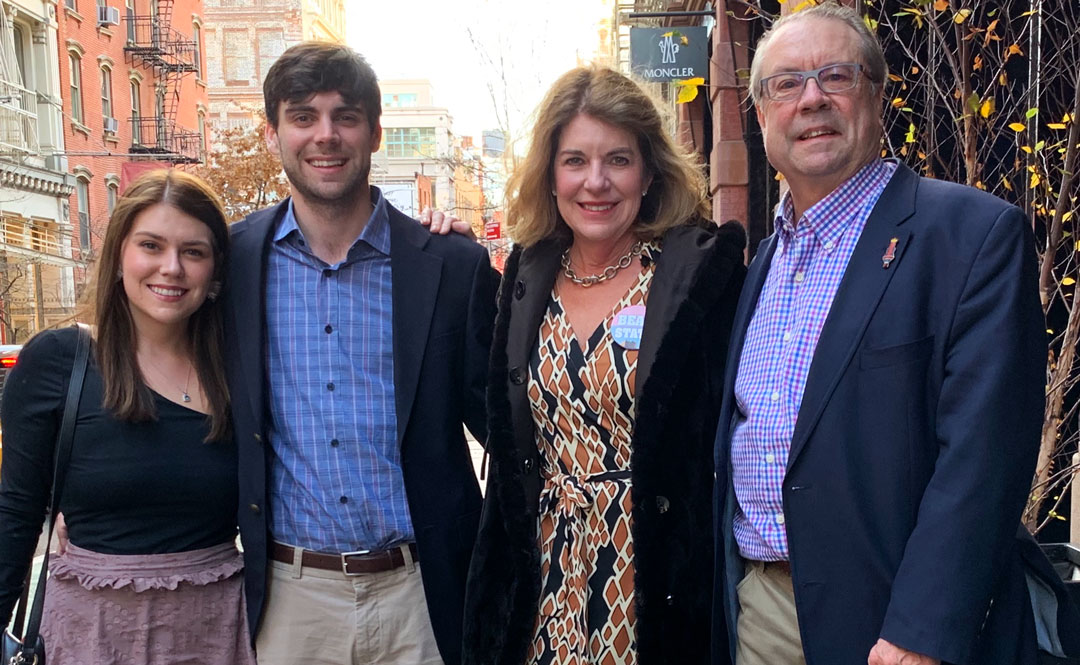 The Nance family (from left) are Graham, Robert, Jane Kerr and Bob.

A major gift to the University of Mississippi from alumnus Bob Nance will provide a new meeting space for Beta Alpha Psi students in the Patterson School of Accountancy.

The 1978 UM graduate’s $50,000 gift established the Robert B. Nance III Family Suite Fund, which will cover costs associated with constructing the dedicated conference room when the Patterson School moves to its new home on the corner of University Avenue and Grove Loop.

“We are grateful to Bob and the Nance Family, who are wonderful Ole Miss advocates, for their generous gift to support our new accountancy building project,” said Dean Mark Wilder. “We are honored to have the Nance family name associated with meeting space for our exceptional Beta Alpha Psi students.

“Bob is enjoying an outstanding career, and we are proud to have him as an alumnus of the Patterson School,” Wilder continued. “We appreciate his loyalty and all his support of our efforts over the years.”

Named to Beta Alpha Psi as an undergraduate, Nance said he hopes his gift will help build facilities that will enhance the accounting program for its students.

“The education I received through the accountancy school was really a tremendous foundation that provided me guidance for business success,” Nance said. “Earning a degree in accounting, obtaining the CPA and having an Ole Miss background opened a lot of doors for me. It gave me credibility, especially at a very young age trying to explore the opportunities in the marketplace. I hope today’s students will have a similar experience.”

During his student days, Nance was active in campus leadership and in his fraternity, Phi Delta Theta. He served as a Chi Omega sorority houseboy and chaired the Homecoming Committee when Nashville musician and alumnus Jim Weatherly crowned the queen. He also assisted in campaigns for Associated Student Body president and for the election of football standout Ben Williams as Mr. Ole Miss. Serving as senior class president, he was invited to speak at Commencement along with U.S. Sen. Ted Kennedy.

Perhaps nothing is more memorable, though, than his time in Conner Hall.

“The accountancy school is near and dear to my heart not only because of the friends I made there, but also because of my professors, especially Jimmy Davis and (the now late) Gene Peery who took me under their wings, recognized my potential and guided me — almost as a parent would — throughout my college career,” said Nance, adding that he has since honored Davis and Peery through frequent financial support to both of their chairs and scholarship endowments.

After earning his degree from Ole Miss, Nance worked in public accounting with Touche Ross and Co. before starting a new venture: building and operating a bank consulting firm for the next six years. He then joined First Tennessee Bank Capital Markets, now FHN Financial, as an investment advisor from 1986 to 2017.

Nance and his wife, Jane Kerr Graham Nance (BS ’85), have two children. Their son, Robert (BBA ’17), works in credit analysis for Horizon Bank in Austin, Texas. Their daughter, Graham, completed her undergraduate degree in accountancy from Ole Miss this year and will begin pursuing a master’s degree in accountancy in the fall.

“Private gifts like Bob’s are so important to the university. This one, in particular, will directly impact our students,” said Jason McCormick, development officer for the Patterson School. “Having a dedicated space where Beta Alpha Psi students can study and encourage each other academically will help them achieve greater success in the classroom and ultimately give them a competitive edge in the marketplace. We greatly appreciate Bob’s generosity in helping to make this happen.”

Denson Hollis, executive director of development – principal gifts, agreed, saying he has known Nance and his family his whole life due to their mutual ties to their hometown of Clarksdale, Mississippi. The two became better acquainted when Hollis was a Phi Delta Theta at Ole Miss and Nance was serving the fraternity as adviser.

“Since I have been back on campus working in the Development Office, Bob and I have met many times to discuss the university and Ole Miss Athletics,” Hollis said. “One thing that has always been clear is his devotion to the Patterson School of Accountancy — and particularly to Dr. Peery — and the education they provided him in launching his career. He and his family are great Ole Miss Rebels and this gift and naming opportunity will help attach their name to his alma mater forever.”

The Robert B. Nance III Family Suite Fund is open to support from businesses and individuals. Gifts can be made by sending a check to the University of Mississippi Foundation, with the fund’s name noted on the memo line, to 406 University Ave., Oxford, MS 38655 or by giving online at give.olemiss.edu.

For more information about supporting the Patterson School of Accountancy, contact Jason McCormick, development officer, at jason@olemiss.edu or 662-915-1757.