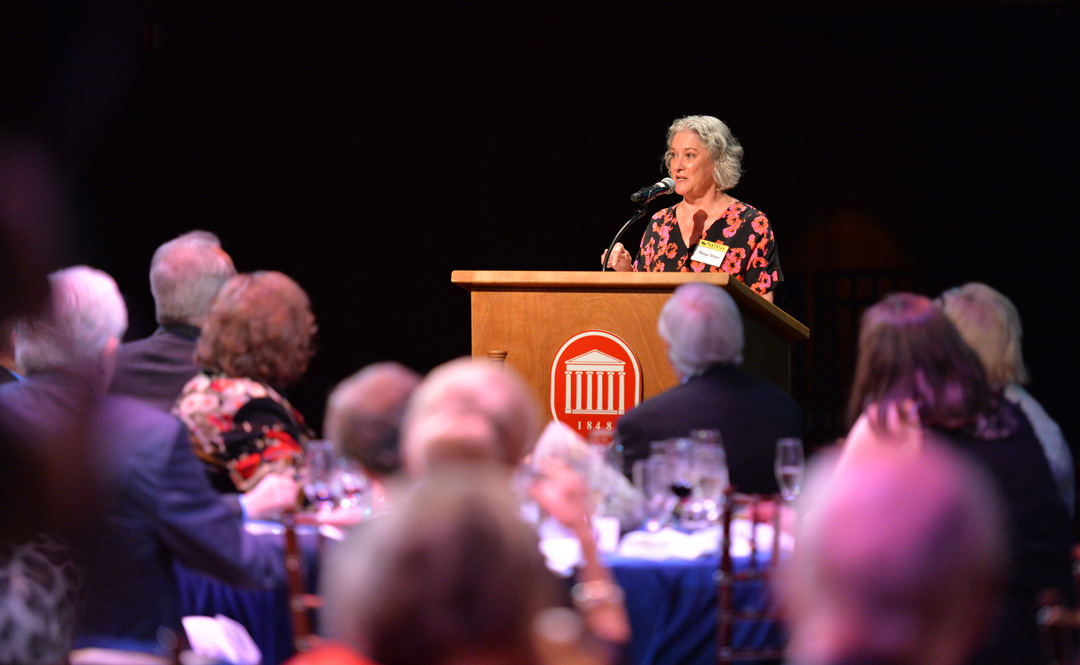 Nancye Starnes of Charleston, South Carolina, an ardent supporter of the arts at her alma mater, has created a film production studio fund to support a new facility and professional training for Ole Miss students.

A love for the arts since childhood led Nancye Starnes of Charleston, South Carolina, to support a new film production program at the University of Mississippi that will offer high-quality professional training and a new production facility for students.

The alumna’s gift of $200,000 establishes the Nancye Starnes Film Production Studio Fund in the College of Liberal Arts.

“I love film and storytellers! This Bachelor of Fine Arts in film production is new and exciting. It’s especially attractive to creative students and potentially career building in ways that people my age can’t begin to imagine,” said Starnes, who earned a bachelor’s degree in education from Ole Miss.

“Michael Barnett, chair of theatre and film, predicts this program will reach capacity quickly and then continue to attract exceptionally talented young people, our future storytellers, to take advantage of the university’s top-notch offering.”

Barnett, also an associate professor, said the gift will fulfill one of the program’s goals – to have a world-class production facility.

“With Ms. Starnes’ generous gift to our Film Studio Fund, we’re able to equip our new production facility with the latest in video and editing technology, allowing us to get our young film program off to an excellent start,” he said.

“Our students will begin working with professional equipment in their first year and when they graduate they’ll enter the job market with high-level skills.”

The Department of Theatre and Film began offering an undergraduate degree in film production as a major in the fall of 2018. Previously, students could only minor in cinema; however, Barnett said the new program offers students significantly more experience.

“We’re very excited about the work we’re going to be able to do with our students and also the work they’re going to be generating,” Barnett said. “We’ve already seen a lot of student success in filmmaking through the minor, with a number of students having their films accepted for film festivals, not just here but internationally.”

The film production studio will be housed in the South Oxford Center, the previous site of Baptist Memorial Hospital-North Mississippi on South Lamar Boulevard.

Starnes – a longtime supporter of the Gertrude C. Ford Center for the Performing Arts and various programs – toured the film production facility when renovations were in the early stages.

“My imagination capabilities in no way match the creativity of the students who will soon be using its fully outfitted spaces,” she said. “I look forward to getting back in there when it’s filled with degree-seeking students.”

Denson Hollis, executive director of development for principal gifts, said Starnes’ gift is a continuation of her dedication to seeing exceptional opportunities available for UM students and the greater community.

“Nancye is most passionate about the performing arts but is also interested in other art-related areas. When Ole Miss decided to convert space at our South Oxford Center into a new film studio, it quickly became a costly project. Knowing Nancye’s love of movies, I knew this might pique her interest and asked her to consider helping. She quickly agreed and because of her generosity, Ole Miss will now house one of the country’s best film production studios, further distinguishing our cinema offerings.”

Alan Arrivée, the head of the BFA in Film Production Program, shared his excitement that the university will soon have the only professional-level film production facilities in the state.

“Unlike many film schools, we will not only train students to be ready for the professional film industry,” he said, “but we will also train our actors and designers for it as well. They will create fully realized film projects together with student directors, cinematographers, screenwriters and lighting technicians.

“Our workflow will reflect industry standards and prepare students to enter the film industry in cities like Atlanta, Los Angeles and New York City.”

“Nancye and I have collaborated for years and have enjoyed numerous meetings in Oxford and our mutually beloved Charleston, South Carolina. I am thankful for her support of Ole Miss, particularly to the arts, and for her friendship.

“Of the many relationships I have with our external partners, no one is more direct than Nancye. I really appreciate her approach,” said Hollis. “She is a fully dedicated philanthropist and when she commits to funding an initiative, she tells you what she wants done, provides the resources and then fully trusts the leadership in those areas to use her resources wisely.”

Starnes said she hopes the program and film production studio will be an inspiration for current and future students.

“I hope this program will increasingly attract creative, talented students to the Ole Miss campus both from in state and out of state. These undergraduates, with their unfolding stories, are our best promise for helping us to understand this sometimes strange, often wacky world we are all trying to live in together.

“What a marvelously instructive, entertaining vehicle for them to use to add their contributions. And, they will be doing it at Ole Miss!”

To make a gift to the Nancye Starnes Film Production Studio Fund, mail a check to the University of Mississippi Foundation, with the fund’s name written in the check’s memo line, to 406 University Ave., Oxford, MS 38655. To give online, visit https://give.olemiss.edu.

For more information about supporting the arts at the university, contact Denson Hollis, executive director of development-principal gifts, at dhollis@olemiss.edu or 662-915-5092.