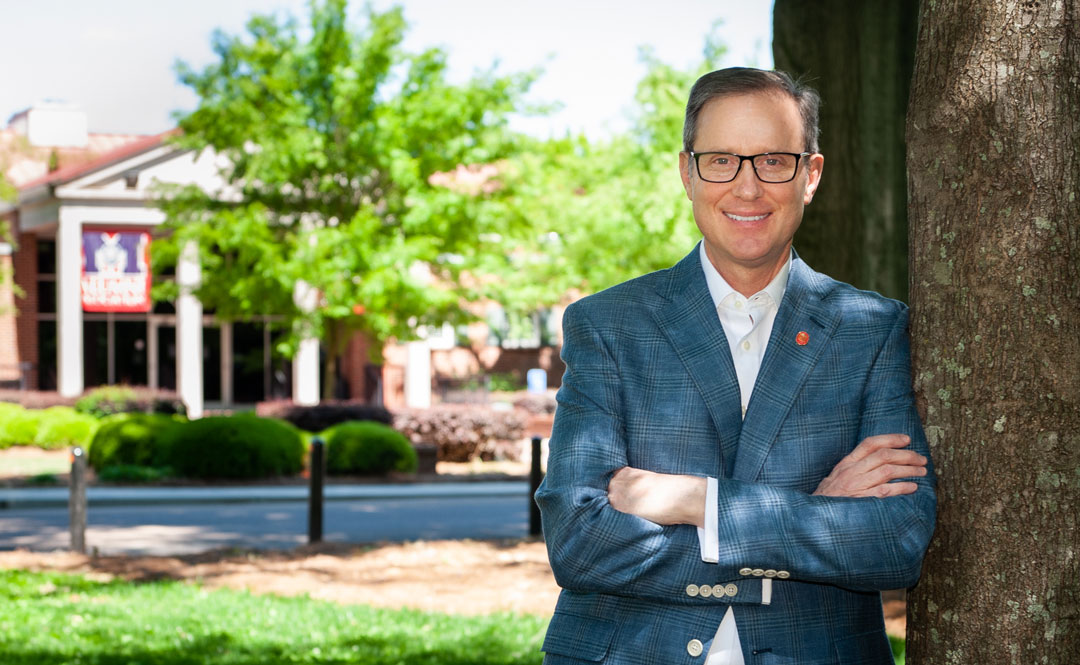 In his 25 years with the Ole Miss Alumni Association, Tim Walsh became acutely aware of the importance of building private support in the form of endowed funds for the University of Mississippi.

Having witnessed the impact of these gifts supporting scholarships, faculty programs, expansion projects and more, Walsh said making a $100,000 planned gift to his alma mater is only natural.

“I have seen the power of endowments throughout my career. No university, no school nor department therein, will truly go to the next level without significantly increasing its endowment,” said Walsh who gives regularly to a scholarship endowment established in his name by the Ole Miss Alumni Association.

“I received a solid education at Ole Miss that helped prepare me for success. To give back, I make monthly gifts to the university through the Foundation, but I also want to leave a legacy after I’m gone.”

The Walsh Scholarship Endowment is awarded to graduates of Christian Brothers High School (CBHS) in Memphis, Tennessee, with preference going to those who are descendants of UM graduates.

“I hope this scholarship will serve as an incentive for more CBHS alumni to attend Ole Miss, and if they do, this will help defray some of the non-resident tuition,” said Walsh, himself a CBHS alumnus. “I want other young people to have the same fantastic experience that I had at Ole Miss.”

The Memphis native now lives in Oxford — hometown of the campus he served as executive director of alumni affairs from 2008 to 2015.

Joining the alumni staff in 1990, he initially managed the alumni club program under longtime executive director Herb Dewees, whom Walsh credits as his mentor in learning to lead an alumni association. He also served as senior associate director and associate dean for development for the School of Law.

Walsh said he is particularly proud of the association’s record growth under his leadership.

“Tim’s passion and love for Ole Miss were the driving force to grow our alumni association and make it one of the top alumni organizations in the country,” said former Ole Miss Alumni Association president Carole Lynn Meadows of Gulfport, Mississippi, and Oxford.

“His loyalty to Ole Miss has been a life-long journey — a journey that is not complete, I am happy to say. We are so fortunate that he is living in Oxford and can continue to be one of the great cheerleaders for Ole Miss.”

Other highlights of Walsh’s tenure include the addition of a dozen new clubs across the country, enhancing alumni communication through an expanded magazine and social media; opening the $21.5 million campus hotel, The Inn at Ole Miss; retiring The Inn’s $400,000 bond debt four years early; and restoring and expanding the Triplett Alumni Center.

“Tim loves Ole Miss dearly. Throughout his professional career, Tim was always working to improve the Alumni Association. He was ever-mindful of its progress and he always desired to see it grow. I’m not surprised that he has designated a gift that will help continue his vision for a better Ole Miss,” said Sheila Dossett, who worked as part of Walsh’s leadership team as senior associate director of Alumni Affairs.

In 2015, Walsh retired from UM and accepted a position as assistant vice president for alumni affairs at the University of Florida, with responsibility for managing operations.

There, Walsh led the Gator100 program, which recognizes the top 100 fastest growing Gator-owned or run businesses, and the reorganization of the Florida Gator Magazine. He also forged a number of partnerships and alliances with the university’s colleges and units, and saw membership in the University of Florida Alumni Association top 60,000. During his tenure, a new office was launched in Coral Gables to better serve the South Florida region.

In 2017, he was named successor to University of Kentucky Alumni Association executive director Stan Key, who served nearly three decades. At UK, he also served as associate vice president for alumni engagement.

Walsh, who earned a bachelor’s degree in public administration and a master’s degree in higher education from Ole Miss in 1983 and 1991 respectively, resigned from UK in September 2019 and retired to Oxford.

“Almost everything in my life is somehow connected to Ole Miss,” Walsh said. “I have built some great relationships here among the university’s alumni and friends and I was fortunate to work with many dedicated, talented people at Ole Miss. My blood runs red and blue, and the Rebels will always be my team. I knew I wanted to retire here in Oxford and live in the community that has really always been my forever home.”

To make a gift to the University of Mississippi, visit give.olemiss.edu.

For information on including Ole Miss in estate plans, contact Daniel K. Wiseman, CFRE, senior director of gift planning, at 662-915-7601 or daniel@olemiss.edu.