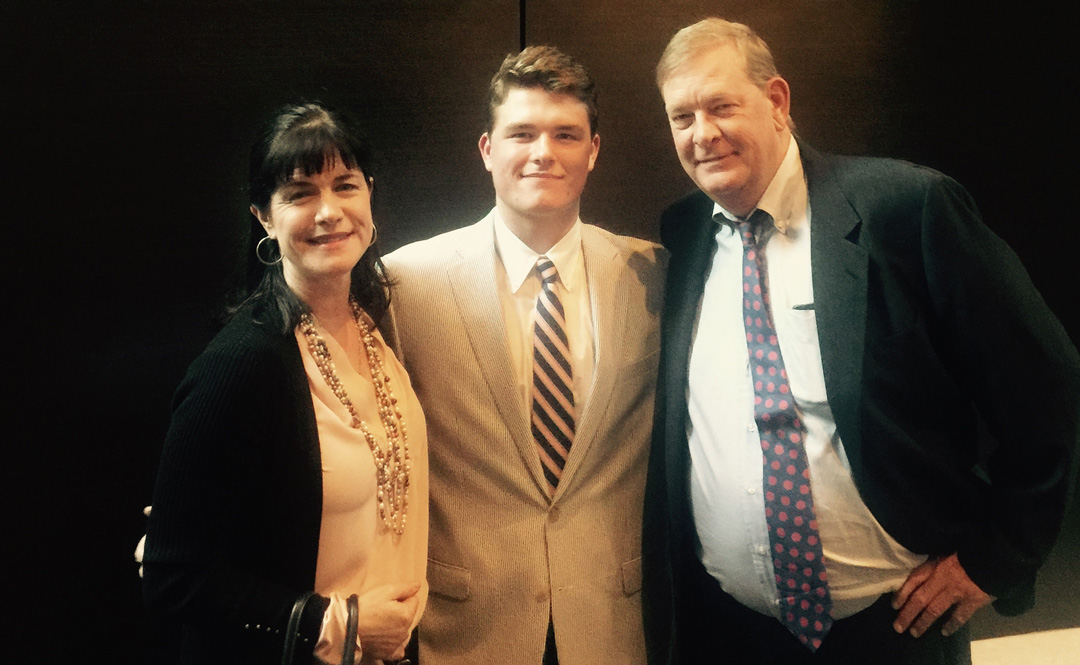 Laura A. Williams and Doug Reese are pictured with their son Payne, a UM finance major.

An $83,000 gift from the estate of University of Mississippi alumnus and supporter Doug P. Reese is being directed toward the construction of the Jim and Thomas Duff Center for Science and Technology Innovation on the Oxford campus.

While it’s common for alumni and friends to include Ole Miss in their estates, Reese established a planned gift to benefit the Chancellor’s Trust fund while a junior at Ole Miss. The 54-year-old, 1989 alumnus died of cancer in September 2019.

Reese of Dallas, Texas, had offers to play football at smaller colleges but decided to follow his high school friends to Ole Miss and never regretted it, said Laura A. Williams of Dallas, his former spouse and an UM alumna.

“Doug had the best years of his life while at Ole Miss, thanks to people who took a vested interest in the students like Judy Trott, Mike Edmonds and Sparky Reardon (all former leaders in Student Affairs),” she said, “Doug struggled with dyslexia.”

A member of Phi Delta Theta and an education and hotel/restaurant management major, Reese “never met a stranger and loved a good joke,” Williams said.

“We are so grateful for Doug’s support of the university through this gift to the Chancellor’s Trust,” said Charlotte Parks, vice chancellor for development. “Our leadership thought such a substantial gift would make the most impact supporting our new STEM (science, technology, engineering and mathematics) facility.”

The Duff Center for Science and Technology Innovation will be the largest single construction project in Oxford campus history, with a $160 million total project budget and 202,000 square feet. Projected to be one of the nation’s leading student-centered learning environments for science, technology, engineering and mathematics, the facility will help increase the number of graduates in STEM fields.

“Being a member of the Chancellor’s Trust gave Doug perks when he was a student, like no greens fees at the golf course and all-access parking on campus, and he used both all the time,” said Williams. “He especially loved to give his friends rides to class because he could park anywhere on campus.

“Doug was extremely smart in math and would be pleased that the money was going toward the STEM facility.”

With construction slated to begin late this year, the Duff Center will be located in the Science District, with one side facing the Grove and another facing Vaught-Hemingway Stadium and The Pavilion at Ole Miss. Thousands of people will pass this new campus landmark daily.

“We greatly appreciate Doug Reese’s generosity and will name a room in the Duff Center in honor of his support and lifelong dedication to Ole Miss,” said Parks.

Reese’s son, Payne, is a finance major in UM’s School of Business Administration, and his son, Gage, is in his senior year at Prestonwood Christian Academy in Dallas.

“Doug had a good heart and was always willing to give a helping hand and be there for a person in need,” Williams said. “It is so like him to leave a legacy at Ole Miss to thank those who did so much for him while he was there.”

Alumni and friends can join the Chancellor’s Trust with a gift of $25,000 or more, and the unrestricted resources are used to address the university’s greatest needs as identified by the chancellor and provost.

For information on including the University of Mississippi in estate and financial plans, alumni and friends can contact Daniel K. Wiseman, senior director of gift planning, at daniel@olemiss.edu or 662-915-7601.

For more information on providing support for the STEM facility, contact Charlotte Parks, vice chancellor for development, at cpparks@olemiss.edu or 662-915-3120; or visit http://give.olemiss.edu. Other naming opportunities are available inside the STEM building.