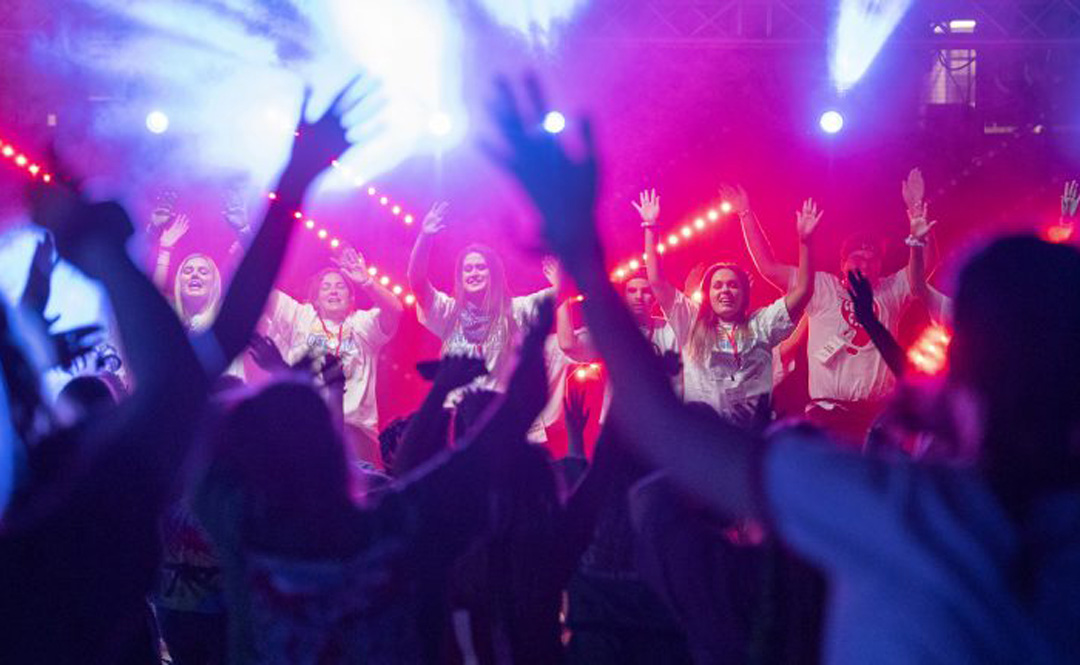 University of Mississippi students raised $252,571.89 for the Blair E. Batson Children’s Hospital over the past year, culminating in the annual RebelTHON dance party this weekend at Tad Smith Coliseum.

During the 12-hour dance party Saturday (Feb.15), miracle families – those children who have received treatment from Children’s and their families – took the stage each hour to pump up fundraisers.

Caleb Bloodworth, an Ole Miss sophomore from Cincinnati and RebelTHON director of logistics, said the miracle families inspired them to continue raising money on social media as they danced.

“We had someone who wasn’t supposed to live past 22 weeks speak, so we said, ‘Let’s each try to raise $22 this hour,’” Bloodworth said. “Little donations like that just add up.”

“Being only our ninth year of RebelTHON and sixth year of donating specifically to Blair E. Batson – Children’s of Mississippi – this year’s total marked a total contribution of $1 million donated to Mississippi’s only children’s hospital,” said Jamie Sproles, a senior from Brookhaven who serves as RebelTHON president.

“This year’s participation in the Dance Marathon was more than ever before and I am eager to see how this year’s efforts continue to propel and grow this organization in the future. I am excited to see the ripple effect of this energy that dedicated students in RebelTHON have and the difference they can make for years to come.”

In previous years, each participant paid a $25 registration fee and then had to raise another $100 to be admitted to the culminating event. This year, students were charged a $20 fee, which went toward their fundraising goal, making it easier to reach the $100 commitment.

“Our hope in making this change is that we create a more accessible and inclusive movement that more students are willing to join in the future,” Sproles said. “We still raised over $250,000 this year, which is right on trend with the previous two years.”

It is important for students to connect with the hospital, which is a part of the UM Medical Center, said Andrew Russell, the Children’s Miracle Network specialist who serves as the hospital’s adviser to RebelTHON.

“The students from Mississippi all have kids from their hometowns who have had to visit Children’s, and this event helps the students from out-of-state match a face to the need,” Russell said. “There is a misconception that we’re a Jackson hospital, but we serve the entire state.”

Fourteen miracle families from all over Mississippi attended the RebelTHON.

“It’s pretty neat to see a bunch of college students put on a first-class event for these families,” Russell said. “It’s fun to see new families come and be blown away by how well-planned the night is. It makes them feel like rock stars.

“On top of that, everyone who attends the dance party leaves with a clear knowledge of the mission and the cause.”

Savannah Day, a four-year RebelTHON participant and senior from Fayetteville, Arkansas, said she enjoys seeing so many college students rally around one cause.

“I think it’s really neat that college kids will come together on a weekend and dance for a whole day to fundraise for Mississippi’s only children’s hospital,” Day said. “It’s rare to find causes and initiatives like this on campus and it shows how powerful it can be when college students care deeply about something.

“I care about the children’s hospital and like being around other people who care too.”

Day, like many of the students in attendance, showed up Saturday afternoon with $100 raised for the hospital, but before the last song played at 1 a.m., she more than doubled that commitment.

“It’s powerful and moving to be a part of it all,” she said.

Over the course of nine years of fundraising and eight dance marathons, RebelTHON donations have supported the hospital’s AirCare Flight Team and helped upgrade patient and family areas.

The more than $750,000 raised over the past three years has contributed to the new pediatrics tower being built at UMMC. The student donations from RebelTHON have made a significant dent in the cost of the state-of-the-art facility, Russell said.